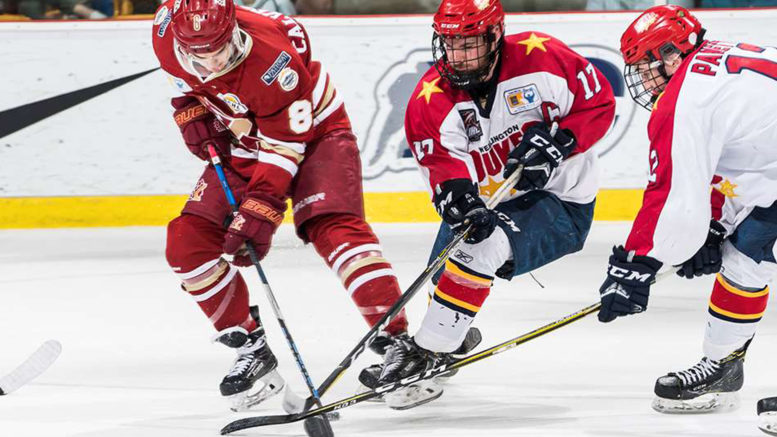 With Wellington up 2-1 going into the final 20 minutes, the hosts showed they were determined to not see the Dukes spoil the party at the Prospera Centre.

Their success came from going hard toward the net Jonah Capriotti had defended valiantly throughout the tournament and the final.  The Chiefs tied it 4:38 into the period as defender Bryan Albee teed up a shot with top forward Will Calverley right on Capriotti’s doorstep. Calverley got a stick on the puck to redirect it home.  Just 4:03, Corey Andonovski was rewarded for a second effort as he piled his way to the net and shovelled in his own rebound for the eventual game winner.  Tommy Lee would tack on an insurance goal with 8:40 left as P.J. Marocco fed him an easy tip in at the far side of the cage to cap scoring in a 4-2 win.

Going into the final period, the Dukes had all the momentum after regular season leading scorer Mitch Martan refused to simply get the puck out on the penalty kill. Martan saw an opportunity to score and took it to put his team 20-minutes away from the top prize in Canadian Junior A hockey.

The Whitby native fought through Harrison Blaidsell’s check at his own blue line and found open ice down the right wing. Using a breaking teammate as a decoy to open up the Chiefs defence, Martan cut to the centre of the ice and caught Chiefs goaltender Daniel Chenard moving laterally before sliding the puck through his legs with exactly one minute left in the second period.

For the second time in as many days, the Dukes also got the game’s first goal. Just 90 seconds into the game, Teddy McGeen capitalized on a bang-bang play, scoring a one-timer off an Andrew Rinaldi pass.

The Chiefs had been carrying the momentum in the second stanza as their top line entered the offensive zone just over five minutes in.  Skyler Brind’Amour passed off to Andonovski who let off a slap shot at the hash marks to the left of goaltender Jonah Capriotti. The Chiefs’ Kaden Pickering muscled his way to the top of the crease and had an easy tip-in into the open cage.

That Wellington had an opportunity to go ahead before the 40-minute mark at all can likely be attributed to Capriotti, who continued his acrobatic excellence throughout.  He robbed Chilliwack’s Adam Berg of what must have looked like a sure goal to the Prospera Centre faithful, one of 13 second-period stops, with 3:44 to play and held the fort as the Chiefs crashed the net on a late power play.

The Dukes’ second-place finish in Canada tops an incredible season for the club as it captured its third Buckland Cup as OJHL champions and its third Dudley-Hewitt Cup as central Canadian champions.  They finished the regular season with a 36-12-1-5 record, good for first place in the East Division.

The league playoffs saw Wellington outlast Pickering and Newmarket in seven games respectively, oust top-seeded Aurora in five games, then Georgetown 4-2 in the OJHL final.  Advancing to the Dudley-Hewitt Cup in Dryden, Ont. the local squad won four of five games, including the championship over the host Ice Dogs.

Throughout their run to the final, the Dukes energized their passionate fan base and enjoyed support from across the Quinte region and beyond. Once again Sunday night, the Highline Hall in Wellington hosted an enthusiastic group of supporters cheering their team on.