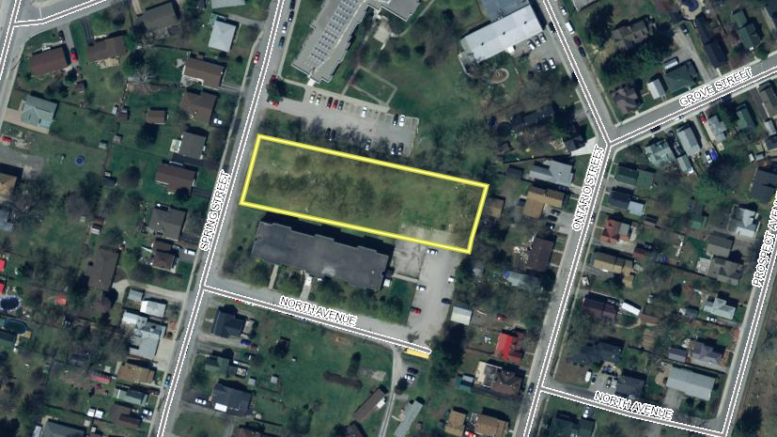 A 24-unit apartment planned for Picton has taken a step forward with council approving a zoning bylaw amendment at their May 16 planning meeting.

County intermediate planner Josh Berry said the development is proposed within an existing residential neighbourhood that comprises a mix of building forms and densities.

“The applicant has supported the development with numerous studies after extensive consultation with County planning staff,” he said.

“The subject lands are currently underutilized,” Berry said. “The proposed development will provide a form of housing that is currently in great short supply in the county.”

The interior side yard is planned to have a setback of three metres, while the site would have a minimum landscape coverage of 25 per cent, and a one-way parking aisle with a minimum width of 5.5 metres.

A report presented to councillors at the meeting says staff reviewed all comments received from the general public and required public bodies and have confirmed the application is in line with the Provincial Policy Statement and conforms with the policies and objectives of the Picton urban centre secondary plan.

The amendment also placed a holding zone on the property to ensure no development moves forward until a site plan control agreement as well as a section 37 agreement to permit the increased density have been entered into with the County.

The development would also include a 30-space parking lot for residents and visitors. Two accessible parking spaces would be included.

The traffic impact brief prepared for the proposed development by BTE Engineering completed in November 2017 found there would be additional traffic in the area of less than 35 additional trips per day. The brief concluded the development would not significantly impact traffic at the nearby intersection. No road improvements are proposed as a result of the development.

The report says the proposed development will intensify lands that are currently not being used to allow the construction of more affordable rental housing which is in short supply in Prince Edward County.

“The proposed development is designed in a manner that enhances the streetscape and public realm through landscaping being provided and by locating the parking lot in the rear of the building,” Berry said.

Berry said the next step is approval of a site plan agreement and removal of the holding zone.

“It’s staff’s intent to bring this back to council as soon as possible,” he said.

Councillor Bill Roberts said he supported the development but suggested the building wouldn’t add much to the local streetscape. He questioned what leverage the municipality had to encourage developers to make enhancements in that regard.

“The design isn’t going to win any international awards here and we have limited space and limited opportunities with regard to constructing these kinds of units — especially where this one is being constructed,” he said.

Berry said staff could request an urban design brief, but that would add extra time and cost to the applicant.

Councillor Steve Graham congratulated the applicant for helping to address the shortage in the local housing supply.

“I’d just like to thank the applicant for stepping up and making a big difference,” he said. “It’s awesome and I don’t care what it looks like, it’s going to serve people that need a bit of break on rent.”