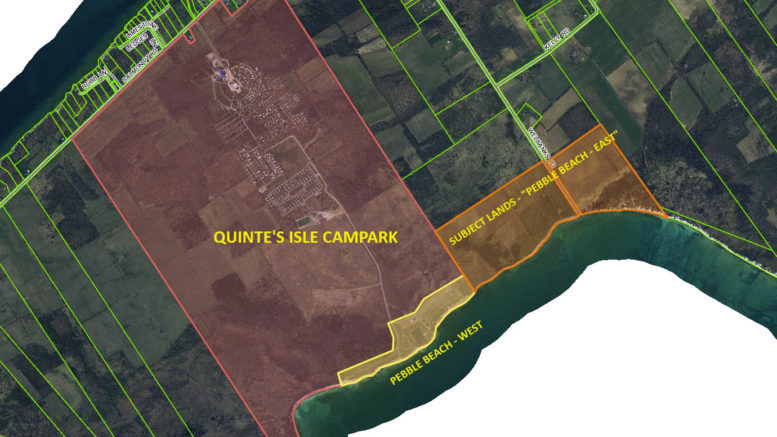 The lands outlined in orange represent the site of the proposed development. (County GIS image)

The County will be investigating further after a proposed significant expansion at Quinte’s Isle Campark was met with a lot of community concern during a recent planning meeting.

After listening to a variety of concerns from members of the public during their May 16 meeting, council approved a motion that will see a staff report on the proposed official plan and zoning bylaw amendments brought back to a future council meeting for consideration.

Councillor Bill Roberts said the Ward family, who have operated Quinte’s Isle for 30 years, are responsible and respected people in the business community.

“There’s a great deal of respect here and generally speaking in our community for their entrepreneurship and their integrity,” he said.

He noted the project would contribute hundreds of thousands of dollars in annual tax revenue and development fees to the municipality. However, he questioned whether enough public consultation had been undertaken.

“That’s all very good, but something else we’ve seen here this evening is that basic statutory requirements for community engagement just don’t cut it anymore,” he said, noting a wave of public concern around the environmental impact of the development.

A staff report included on the planning meeting agenda says the purpose of bringing the issue forward was to inform council of the proposed amendments as well as to meet the statutory requirement of hosting a public meeting before council considers any decision.

The official plan amendment would see the lands re-designated from rural to a shoreland designation in order to permit a seasonal tourism commercial campark with 337 park model trailer sites. The zoning bylaw amendment, the report says, would see the land rezoned from a rural 2 zone to a special trailer park commercial zone to permit the intended uses. The amendment would also establish site-specific development standards.

“Functionally, it’s an extension of the existing site,” manager of planning Paul Walsh told councillors at the meeting.

When added to the current 600 serviced seasonal trailer and camp sites, the expansion would bring the park’s capacity to nearly 1,000 sites. The report says both developments would share existing recreational facilities such as a marina, basketball court, and swimming pools. Access to the site would be through the existing Quinte’s Isle entrance with an emergency access available at 558 Welbanks Road.

“The zoning is proposed to be the same or similar zoning as the current Quinte’s Isle Campark,” Walsh said. “They’ll need some special provisions if approved by council to tie the two lands together and recognize that they do operate this one.”

The proposed “Pebble Beach East” expansion would involve lands immediately to the east of the existing Quinte’s Isle Campark. The site is about 32 hectares (80 acres) in size and is located at the southern tip of the municipality within Athol ward. The land fronts onto 821 metres of Soup Harbour along Lake Ontario with Welbanks Road running through the eastern portion of the land and ending at the shore. There is additional frontage on each side of Welbanks Road.

A planning justification report, servicing design brief, archaeological assessment, stormwater management report, traffic impact study, and environmental impact study have all been completed in support of the applications. The studies will be peer-reviewed by the County’s consultant where appropriate, the report says.

The report says staff observing the site found it to be generally flat and that it is currently used as pasture or for hay. It’s noted that the wooded vegetation in the area is likely limited by shallow soils and limestone bedrock while the shoreline is pebbly washed rock.

East of the site is the Soup Harbour Provincially Significant Wetland.

The report says in lieu of a small unevaluated wetland on the property where the development is proposed, a wetland compensation area is planned to be constructed near the Soup Harbour Provincially Significant Wetland. The area would have a wildlife viewing platform, signage, and a parking area that would be accessible through a turnaround on Welbanks Road.

“There’s a strong market demand for this project with expected build-out five years after approval,” she said.

She said there are substantial financial benefits to the County, noting the project would contribute $300,000 annually in property taxes, $800,000 in charges and building fees, and would create an estimated six new permanent jobs. She said construction costs are in the range of $2–$3 million and there would be no additional services required from the municipality.

She said there were consultations with Quinte Conservation and the municipality back in 2016 and 2017.

“There was extensive consultation with Quinte Conservation, for example, with our environmental impact study and what their concerns might be and what sorts of surveys they might want to have undertaken,” she said.

Residents from the area brought forward a number of issues, both written and voiced at the May 16 meeting.

She said the proposal contravenes the County’s stated vision for the rural character of the municipality and argued the proposed amendment doesn’t conform to the 2014 Provincial Policy Statement as it relates to natural heritage.

“This is an important part of the natural and cultural heritage of the county,” she said.

She said the proposal would exacerbate risks to threatened species present on the property and adjacent wetlands around Soup Harbour.

“This is not a project in the public interest,” she said.

In a letter submitted prior to the planning meeting, Salmon Point Road resident Don MacLean said Quinte’s Isle has been a good and respected neighbour. While he said he isn’t against the expansion in principle, he has serious concerns about the proposed amendments.

“My primary concern relates to the additional burden it would place upon what is already an unsafe density of traffic on Salmon Point Road,” MacLean said. “I am also concerned about the park’s potential impact on water quantity and quality from the neighbourhood aquifer that runs parallel to Salmon Point Road.”

He said he’s seen Quinte’s Isle go from a modest campground to a major development over the years. The expansion would increase the total sites to 956 and he suggested that could see a peak population of the park reach 2,400–2,900 in the summer, which would be larger than Wellington.