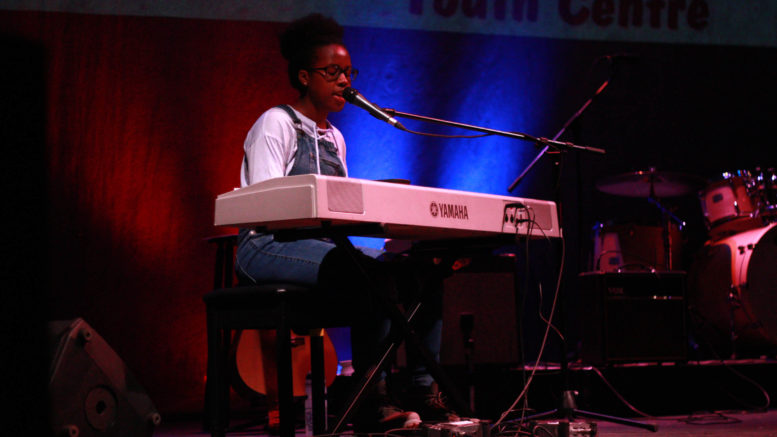 Danielle Edwards performs along with mentor Dan Dayton during the ROC'N Revue on May 17. (Chad Ibbotson/Gazette staff)

About 70 youth and mentors helped bring the fifth annual ROC’N Revue to life last Thursday at the Regent Theatre.

Hosted each year by the Recreation Outreach Centre (ROC), the event raises funds that support a variety of youth-centred programs in the community. Close to 400 people packed the Regent for the event. While the final tally wasn’t available before press time, the event could raise in the area of $10,000 for ROC initiatives.

The revue was emceed this year by Lucca Latchford-Jones and Thomas Davies along with Hilary Fennell and Prince Edward OPP detachment commander staff sgt. John Hatch. The production opened with a video produced by PECI students that saw Davies riding along with Hatch. Together, they lip sync a couple of songs including “Cheap Thrills” by Sia featuring Sean Paul in the style of Late Late Show host James Corden’s “Carpool Karaoke.” The skit immediately pulled in the crowd and set the tone for a fun evening.

“We have some pretty amazing kids here in the county,” said ROC communications and marketing director Lesley Lavender.

Each young performer was mentored by a professional community coach. That connection between youth and mentor is an important part of the community work ROC does.

“It’s a program where you’re seeing the key things we do,” she said of the revue. “We provide mentorship, leadership opportunities for youth, experiential learning opportunities, community connections, volunteerism, and, of course, a medium for them to self-express and feel confident.”

Lavender said there aren’t many other opportunities out there for youth to perform on such a large scale with an audience of hundreds, quality production values, and professional coaches by their side. That opportunity to learn in a professional setting also extends beyond those who are performing.

“There are so many other ways that we involve youth,” she said. “We worked with the Grade 10 business class to help promote and market and they participated in the evening events.”

Two of those youth were emcees Latchford-Jones and Davies, while many of their classmates assisted with front-of-house duties and an intermission raffle where ticket buyers had an opportunity to walk away from the show with one of two gift card prize packages to local businesses worth more than $500 each.

“We have teens involved in every aspect of ROC’N Revue, not just what you’re seeing onstage,” said Lavender.

What audiences saw onstage could be surprising for those who aren’t already familiar with the talent level of local youth. Lavender said those in attendance got the chance to see it firsthand.

“It’s pretty amazing the talent they have and how the coaches are able to help guide them,” she said.

Performances ranged from song to spoken word and even comedy with Ed Banting and coach Lenny Epstein offering a memorable comedic turn.

As they often do at the ROC’s Prince Edward County Youth Centre, the Prince Edward OPP had a prominent place at the revue. Lavender said the ROC’s relationship with the OPP is critical and helps put a face to the police service. Officers regularly visit the youth centre to speak with and interact with local teens. They also work closely with ROC staff on various committees.

“It’s great for the youth to develop positive relationships with the OPP who are there to serve and protect and it helps the kids to see them as people,” she said.

Speaking from the stage Thursday, Hatch thanked ROC staff and executives for their leadership and passion when it comes to youth in the community.

“We are lucky that we have a place where youth can just go and have fun and be safe amongst one another,” he said.

However, Hatch said the ROC is more than just a place to hang out.

He noted that Prince Edward OPP community safety officer Patrick Menard had just recently given a talk about the risks associated with cannabis use. He said the mentorship provided at ROC is also critical in an age where cell phones and computers are omnipresent and youth have instant access to almost infinite information.

“This can be a good thing,” he said. “The potential is limitless, as long as they learn right from wrong, good from bad, and learn how to make good choices and good decisions — the ROC does that.”

The ROC offers in-school, after-school, and youth-centre programming. In local schools, the organization offers Girls ROCk It! and Guy Time mentorship programs for students in grades 7 and 8. Students in grades 1–8 can take advantage of after-school program ClubROC, which provides opportunities to develop fundamental skills through workshops and recreational activities. In the summer there’s also Camp ROC. The Prince Edward County Youth centre provides a variety of weekly and daily programming and drop-in activities.

“All of our programs at the school and the youth centre are all offered at no cost to participate,” said Lavender. “As a fundraiser that’s what ROC’N Revue is helping us to achieve, it’s helping us to keep the youth centre’s doors open, to provide program supplies, healthy snacks, transportation and educational field trips and workshops.”

For more about the ROC, visit www.theroc.ca.