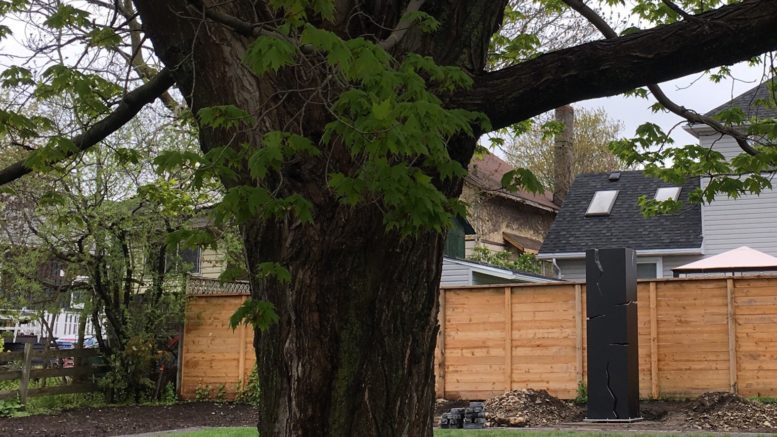 A new addition to the Wellington Heritage Museum back garden contemplates the site's past. (Submitted photo)

A recent addition to the garden at Wellington Heritage Museum is infused with the site’s Quaker past.

A news release issued by the municipality on Tuesday says the new and improved garden behind the museum took one step closer to completion this week with the installation of a sculpture titled Silent Expectation.

“We are thrilled to see the sculpture in place,” says Chase. “The garden project has brought a breath of fresh air to this site and we are excited for the community to see and enjoy the final transformation.”

The sculpture project was initiated by the Friends of the Wellington Heritage Museum back in the fall of 2017. The call for submissions saw artists from across Ontario and Quebec submit proposals. After a lot of deliberating, the friends group selected artist Philippe Pallafray’s Silent Expectation.

The sculpture was in part inspired by the Wellington Heritage Museum’s former use as a meeting place for the Society of Friends, also known as Quakers. The release says the museum volunteers were drawn to the artist’s attention to Quaker values as well as some of the thoughtful connections made between the values and his proposal.

Pallafray’s proposal reveals the artist sought to evoke the Quaker tenets of simplicity and moderation. He says the work invites contemplation. The sculpture’s solid, black exterior features jagged cracks that give off a silvery shimmer when exposed to sunlight, which also touches on the Quaker belief of inward light’s ubiquitous presence in humans.

Pallafray summed up his design with a Leonard Cohen quote: “There is a crack in everything. That’s how the light gets in.”

“I love the contrast between the modernist appearance of Silent Expectation and the traditional architecture of the museum,” she says.

The final step of the garden project will see landscape architect Ben O’Brien of Wild by Design install plantings with heritage value and a range of colour. The garden will be unveiled officially later this season.

The Friends of the Wellington Heritage Museum are hoping the public continue to support the garden project in its final phase. They’re encouraging the public to attend “Sitting Pretty: A Chair-ity Auction” which is being hosted by the group at Wellington Torn Hall on Saturday, June 2. The silent auction runs from 10 a.m. to 5 p.m. with a live auction to follow at 6:30 p.m. The event features thirty vintage chairs that have been transformed by local artists. The funds raised will help cover the cost of the plantings and finishing touches for the spaces.

More information about the event can be found at https://www.facebook.com/wellingtonheritagemuseum/ or reach out to the friends at friendsofwhm@gmail.com.