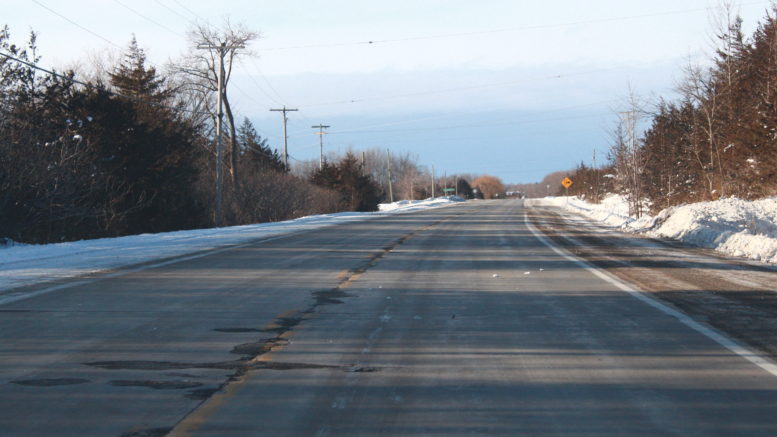 County Rd. 49 and the planned rehabilitation of the Skyway Bridge were topics of discussion this week as County representatives travelled to Toronto for the Ontario Good Roads Association (OGRA) annual conference.

On Monday evening the County delegation was given an opportunity to meet with Minister of Transportation Kathryn McGarry to discuss local concerns. Among the most important issues discussed were the state of County Rd. 49 and the upcoming rehabilitation of the Skyway Bridge.

“They had been waiting for that so that their engineers could review it to see if there are any changes they would recommend, see what their comments are,” said Quaiff. “At least they have that document on hand now so that they can make a more informed decision about some form of funding we’re hoping.”

With some preliminary work expected to begin on the Skyway Bridge this year, Quaiff said the County delegation hoped to make a case for doing some work on both projects concurrently.

“We basically wanted to tie it in together,” he said. “You know, while you’re doing the bridge, it would be a great opportunity to start doing a little bit of work on County Rd. 49 instead of working on the bridge for five years and then, when it’s all completed and everybody’s back to normal, then all of sudden we’re going to start tearing up County Rd. 49.”

The municipal asset management plan and the need for infrastructure funding were also discussed. Quaiff said the local representatives explained the situation to the ministry given the County’s 1,100 kilometres of roads.

The municipality once again requested the ministry to download an 1,800-metre section of Hwy. 33 in Picton running from Stormy’s Automotive west to the traffic circle. Quaiff said the issue was important to address as there are future growth opportunities along Picton’s western gateway. In the past, the municipality has had some difficulty securing the necessary entrance and exit permits for development taking place along the stretch.

While the issue isn’t currently holding up any development, Quaiff said it has the potential to if more applications come forward.

Overall, Quaiff said it was a positive meeting. Conferences like OGRA, he said, offer both a learning experience for local officials and a chance to meet others dealing with familiar issues.

“For municipal leaders, I’d say it’s pretty valuable because you get to network with other municipal councils of a similar size,” said Quaiff. “You get to attend workshops and there’s a whole array of different things from affordable housing to roads to water to sewage, a lot of the same needs that most of Ontario has.”

In the past the OGRA conference was held in conjunction with the Rural Ontario Municipal Association annual conference, but the conferences have been held separately for the last couple of years. While there was some concern the conference may not prove as valuable as it had in the past, Quaiff said it has continued to grow and is especially beneficial for municipal staff.

The conference wraps on Wednesday afternoon.