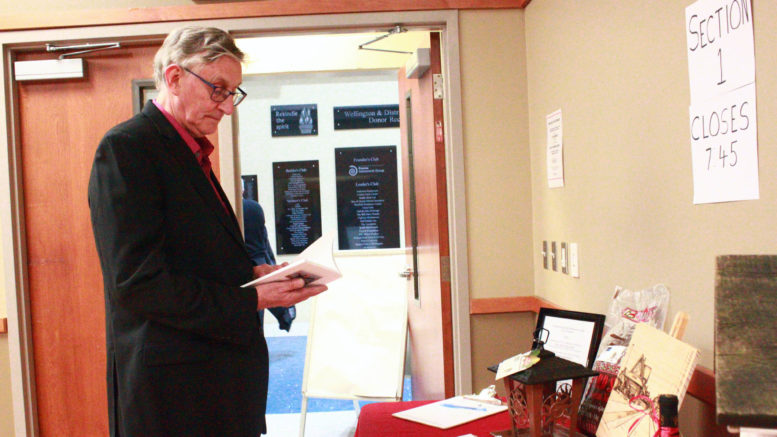 Catered by Chef Michael Hoy and featuring live and silent auctions and performances from Eddy and the Stingrays, the event appeared to be a hit for hospice.

Hospice Prince Edward board member and chair of the event’s organizing committee Annette Gaskin was enthusiastic about the response.

“It went really, really well — everybody was really delighted,” she said.

While she said the event was successful financially, there wasn’t yet a final total of the funds raised when she spoke to the Gazette on Monday. All 150 of the available tickets sold out and the vast majority of those who purchased a spot at the gala braved some harsh winter conditions to make it to the Wellington and District Community Centre on Saturday night.

“It surprised me and it’s just a reflection of the county — we only had four people not show up,” said Gaskin. “The weather was terrible, so it was amazing people still made it out.”

The money will go to support Hospice Prince Edward’s operations, including the residential hospice and community outreach programs. Hospice receives some financial support from the province, but most of the funding for the organization’s programs must come via community support.

“We have to raise at least 75 per cent of what we need for operating costs,” said Gaskin.

The organization has to fundraise about $18,700 each month or $224,400 annually to support the operation.

Hospice Prince Edward president and board chair Peter Matthewman said the funds raised at the gala would help give hospice some space when it comes to funding day-to-day operations and would allow the organization to plan for the long term.

“We’re not scrambling to keep funding going on a day-to-day basis,” he said.

Hospice has held galas in the past, the last being about five years ago. Gaskin said organizers decided to bring it back in an effort to try something a little different that would attract those seeking a fun night of dinner and dancing. She said the community support received was overwhelming.

“We got a tremendous amount of support from the whole community in terms of people who own stores, our artists, they contributed so much, they donated so much — it was amazing,” she said.

She said it’s the type of support where four different guests were prepared to pay $100 for a pie.

“The support was there, and I heard from a person today that the pie was wonderful,” she laughed.

Aside from the financial support such events generate, Matthewman said the gala would increase hospice’s visibility in the community.

“Families realize they can really be relieved of the burden of being caregivers and worrying about medications, laundry, and other issues,” he said. “Instead, they can take those final days or hours with their loved one, reminisce, have conversations, and share special moments — it’s so important that they have the opportunity.”

He said a high-profile event like the gala would show the public and other caregivers within the community that hospice is available and able to provide support at no cost.

Hospice took the opportunity during the gala to recognize Catharine Huff for a significant donation. Gaskin also thanked Hoy and Eddy and the Stingrays for their contributions.

“It was a great, great night and it didn’t close down until one in the morning,” she said.

Matthewman thanked everyone who attended as well as Gaskin and all the other volunteers who helped make the event a success.

“It wouldn’t have been as successful if we didn’t have all of those people volunteering,” he said.