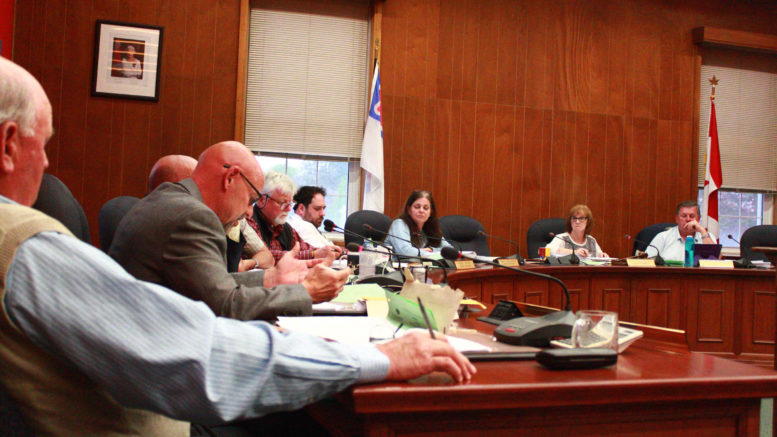 Councillor Jamie Forrester speaks during council's discussion on the creation of a non-share capital corporation on Tuesday. (Chad Ibbotson/Gazette staff)

Council approved the creation of a non-share capital corporation this week for the purpose of providing assistance to farmers.

The estimated cost to incorporate the company is $3,500–$5,000 plus disbursements. A staff report presented to council on Tuesday says the cost would be expensed to the professional and contracted services line within the municipal budget’s mayor and council statement. The budget for the line is $10,000 in 2018.

“To start an incorporated allows development of the grant process and forming of the corporation to move concurrently,” said acting mayor Dianne O’Brien. “Another benefit is that this is a non-share capital corporation that gives the municipality a vehicle to deliver other grant programs. This is a good option.”

While the motion mentions small businesses in an effort to adhere to the program outlined in the act, O’Brien said the intent is to focus the fund on new and young farmers. The farming assistance ad hoc committee will develop the grant application process and eligibility criteria as well as recommended funding for the program. Ultimately, it will be up to council to decide how much will be contributed to the fund.

“Whether we’ll be successful in finding money to help the farmers or show any relief, I don’t know,” O’Brien said. “But this corporation could have future benefits for the entire county.”

Councillor Kevin Gale was among those who spoke in favour of creating the corporation.

“It’s a good start, it could be maybe built on down the road as we get our feet wet,” he said.

Gale said he felt the method was a much more cost-effective way to assist those in need of assistance in the agricultural industry than a blanket reduction in the farm tax ratio.

“It proves to the most vulnerable in the farming sector, the new people and young people trying to get involved, that council listened,” he said.

Councillor Jamie Forrester didn’t agree. He said he supported farmers’ request for relief when it came forward, but he couldn’t support the direction the issue has taken.

“Even though I believe in the basic (principle), I cannot support it because I think it’s gone in a direction it shouldn’t have gone in the first place,” he said.

He said he is concerned about the long-term budget impacts.

It is anticipated the incorporation process will take between eight and 12 weeks. The committee asked council to start that process now as opposed to waiting for more program recommendations before moving forward. This will allow the development of the grant process and the forming of the corporation to proceed at the same time.

The farming assistance ad hoc committee is meeting on a bi-weekly basis and has established a work plan that fits the established timeframe, the report says. The objective is to have grants disbursed to farmers as close as possible to the final 2018 tax installment date of Sept. 15.

While the corporation is being established with farmers in mind, the report notes the move could also give the municipality a mechanism to deliver other grant programs including the existing municipal community grant program, future Community Improvement Plan incentives, and grants to support built heritage.

“This would have the benefit of ensuring a consistent approach to grant allocation by an arms-length entity of the County that leverages experience from within the community and which can develop a focused expertise around the delivery of these sorts of programs,” the report says.