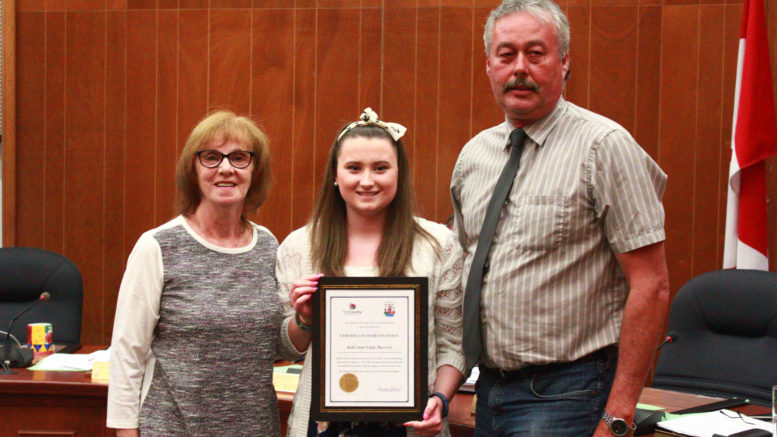 Two local youths were recognized by council Tuesday, one for quick action during an emergency situation and another for her continuing commitment to volunteerism.

Maycock was nominated by councillor Brad Nieman following an incident that took place in August 2017.

“Kelli-Anne witnessed an accident where there was a death and she showed compassion, she showed empathy,” said O’Brien. “She stayed with the victim until the emergency response team came and even after because she kept him calm.”

A letter from Prince Edward OPP detachment commander Staff Sgt. John Hatch details the accident. It was Aug. 12, 2017, just past 9 p.m. Maycock heard a loud crash outside her home. When she went outside to see what had caused the crash, she found the victim calling for help. He’d lost control of his motorcycle and had apparently hit a pole.

Maycock immediately called 911, stayed with the man, and provided details to the emergency dispatcher.

“Because Kelli-Anne was so brave and so aware of what to do at the scene, his last moments were with someone who cared, and who did everything for him that she could, under traumatic circumstances,” Hatch’s letter says.

After hearing the story, Hatch requested a meeting with Maycock. That meeting took place on Sept. 1 at the Prince Edward County OPP detachment. While Hatch notes in the letter Maycock was obviously shaken by what happened, he says she handled the situation impressively and beyond what could have been expected from any teenager. “She was very dismayed and upset to find out that he had passed later on in the evening,” said O’Brien. “Staff Sgt. Hatch sent an absolutely glowing letter saying he had met with Kelli-Anne and her mother and he called her ‘a courageous young girl’ and he thanked her for doing everything she could in a very stressful situation.”

As previously reported by the Gazette, Burris was one of 10 recipients of the 2018 Ontario Medal For Young Volunteers, which was presented by Lt.-Gov. Elizabeth Dowdeswell in Toronto back in April. Burris was nominated for the civic recognition award by councillor Steve Graham.

O’Brien said Burris is a person to be emulated.

“We could use so many more (like her), we’re so blessed to have her in our community — she just gives of herself constantly,” O’Brien said. “She’s committed to helping people.”