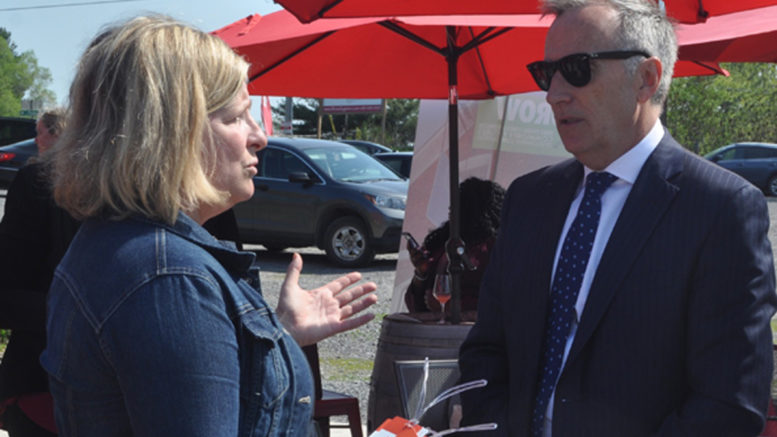 The federally funded Eastern Ontario Development Program (EODP) is investing $10,000 to help local food producers access a tech-savvy start-up that promises a better way to get products to market.

Last Thursday, Marcia Woods, the founder of FreshSpoke, was at Three Dog Winery in Sophiasburgh to launch her innovation alongside Bay of Quinte MP Neil Ellis and representatives of the Prince Edward-Lennox and Addington Community Futures Development Corporation.

The product of a multi-generation farm in Oxford County, Woods has long been an advocate for local foods but she discovered distribution has been a problem for smaller-scale producers over the years. She decided she’d try to use her technological background to address the problem. 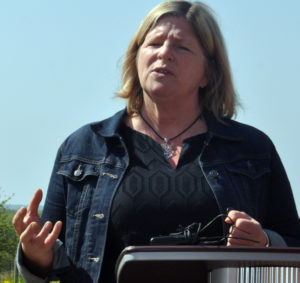 “We want to focus on the heart of what we’re doing — the food and beverage artisans, our growers and our farmers,” Woods said. “For a very long time, we’ve had a food system that has grown to be very commoditized and it does not fit local food. It’s like fitting a square peg in a round hole.”

According to Woods, it’s a real challenge for farmers to make connections with buyers and to physically transport their products when they need to be focusing on growing. She also said buyers want local food because it’s fresher and more flavourful, but they sometimes can’t make the connection. Faced with lower costs from imports, sometimes they relent and bring food from afar. That becomes a problem.

“In 2019, they’re expecting local food nationally to be worth $19 billion in sales. You break that down to a granular level in your own community and you can equate very quickly that local food will have a tremendous impact. So, the big key here is that our rural communities need economic growth and economic stimulus,” Woods said. “We are a food-producing province and specifically Prince Edward County and Lennox and Addington, that is definitely in their wheelhouse. What we need to do is obviously find ways we can stimulate that economic growth. The easiest way to do that is to address the biggest barriers and challenges to making it happen — that’s distribution.”

Producers, acting as wholesalers, are able to load their products into a web directory. Buyers search that directory and they can pick and choose which items they want to stock. The producers set their own prices. Delivery drivers can also search the products and agree to fill excess capacity on their trucks for a price.

The result is a way to make local small- and medium-sized producers competitive with volume businesses. Woods explained the difference she believes her service can offer. With high-volume deliveries in the current system employed by grocery stores and other buyers, she said an imported tomato can pass through 30 different hands. By the time it does, the producer gets 15 cents for every dollar spent on the produce. With FreshSpoke, Woods believes that up to 90 per cent of the profit will actually go directly back to the producer.

“That way we’re driving more cost out and making local food competitive. We also reduce our carbon and improve prosperity for those drivers, many of which are in your own community and looking for ways to be able to have a profitable business.”

Producers can set their own prices through the system. As more people become involved, Woods said there should be enough data generated to give a good sense of the true costs of good sold. Now, she says, it’s difficult because producers are having a hard time estimating the cost of transportation. While weather and conditions mean there’s no such thing as cost certainty for many producers, they may be able to better predict their costs ahead of time.

FreshSpoke started less than two years ago in the Barrie area and has spread throughout Ontario and into the United States. Already, it boasts 300 wholesalers, 260 small- to mid-sized producers and over 1,500 products.

The EODP grant is to help bring producers in Prince Edward and Lennox and Addington onboard with the service, which has dedicated staff in place to help them use the technology and take proper marketing photographs and videos to attract buyers. With the funding, producers will pay $400 to join the service, down from $1,500.

Ellis said the investment in FreshSpoke will help the region’s tourism, economy, and sustainability.

“Preparing our region for the economy of the future requires as much creativity as it does sweat equity,” he said. “This is why the EODP is expanding wholesale markets for Prince Edward and Lennox and Addington food producers using some innovative methods… This will help our local farmers and micro producers market their products commercially within reach of a wider network of institutions, retailers, and restaurants.”

He added producers will see an expanded marketplace both in the Bay of Quinte and beyond.

Three Dog Winery is one producer that has already taking advantage. Sacha Squair, the winery’s owner, said she’s known Woods for a long time and said she has no doubts the model will work. While she’s excited about her products reaching customers at farm gate operations and restaurants, she also said it will allow the chance to champion more local food at her business.

“We sell only local foods and artisanal foods. We support all local producers and this gives us access to be able to get more local products and also allows us to sell our local products to local restaurants and share the cost of transportation,” she said.

Woods also said there’s a companion app, Local Food Champion, that will detail all the local foods the retailer has procured over a set time period. It will also show visitors other places where products they like are sold so they can find the taste of place they expect.

“You’re not just asking for it. It’s about expecting it, looking for it, and patronizing those restaurants and institutions that support it,” she said.

FreshSpoke’s business model will work, Woods said, because it is scaleable. Communities across North America are facing the same problem. She credited PELA CDFC for taking an active role in promoting a new distribution system and said other regions are taking notice of that.

“Now lots of other people are looking what you’re doing here and, actually, we have an economic development department in Ohio that wants to do the same thing because you guys led the charge,” she said. “With your support, we’ve been able to say ‘Look, this is what can be done when you really care about local food in your community.’”

Interested producers can learn more about what FreshSpoke offers by visiting its web site at www.freshspoke.com.