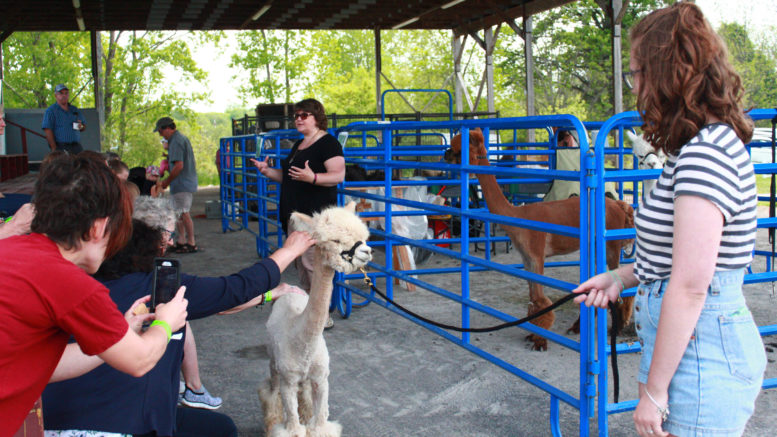 More than 1,100 people made their way through the Prince Edward Community Centre on Saturday for the second annual Fibre Fest.

Erin Thomson, one of the organizers of Fibre Fest, said it was another great year for the celebration of fibre art.

“It was amazing, we had about the same numbers that we had last year, we had wonderful vendors and incredible patrons,” she said. “We had more classes than we’d had the year before and they were all huge successes, so, overall, we were very, very happy.”

Thomson said it can be a challenge to track exact attendance numbers, but she indicated there were more than a thousand visitors to the festival between its opening at 9 a.m. and closing at 4:30. Those patrons were kept busy with 65 vendors in attendance, as well as 10 farmers’ market vendors, and five food trucks.

“We did have some growth between last year and this year, so that was good,” said Thomson.

Vendors brought with them clothing, accessories, and art crafted from wools and yarns. There were also a number of learning opportunities. Visitors could register for a selection of 11 workshops taking place throughout the day focusing on such skills as beginner crochet, polymer button making, and mosaic knitting. For Thomson, that educational aspect is critical.

“As part of our mission statement we really want to make sure that we’re providing education in hard skills as well as just awareness that these handicrafts are still going on in modern day society,” she said.

Since the interests of the fibre community range from fashion to the simple joy of the craft, she said it’s important that those learning opportunities are also varied.

“For us, it’s really important to offer a diverse cross-section of classes so that people in our Prince Edward County community, and in the bigger fibre community, have an opportunity to learn from masters,” Thomson said.

Not even an hour after the event started, the parking lot outside the community centre was filled and inside hundreds of people perused items. Vendor Jessica Hendry of J Hendry Design Co. said the crowd was significant even though it was early.

“I was here last year,” she said. “I like it, it’s really good and there’s a great local campaign for it — it’s a big draw for the community.”

She said it was one of her favourite shows to attend.

Hendry makes project bags for knitters. She says her goal is to make knitting a hobby that can travel with you anywhere.

“My bags are made for a person on the go so you can carry all your yarn with you for the project you’re working on,” she said. “I like to do them in different types of fabric so everybody can find what suits their personality.”

“It’s been great to have some of their guidance as we move forward and, certainly, to partner with them is a huge blessing for us,” she said.

Fibre Fest is a not-for-profit venture. Proceeds generated above expenses will go toward the Historical Society for its community initiatives.