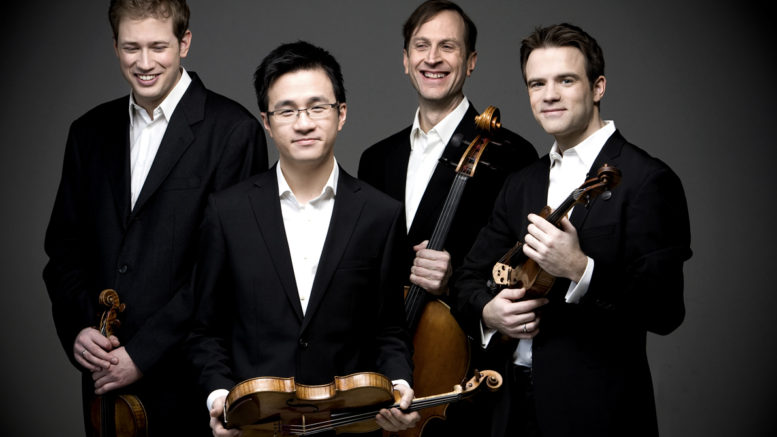 In their first year as artistic directors for the Prince Edward County Chamber Music Festival, the members of the New Orford String Quartet wanted to make a splash — and they believe this year’s lineup will do that.

The concerts for the September festival were announced at a launch event earlier this month at the Waring Hall, featuring the music of the New Orford String Quartet. Eric Nowlin, a viola player in the quartet, says there was considerable excitement in the direction the festival is taking.

“Our launch was more than I could have ever hoped for with double the number of people we had previously — maybe over 100 people bought tickets,” he said. “The quartet played and people really enjoyed that. We also had a silent auction and raised a lot of money so we can continue to bring in the best people.”

Nowlin said when he, violists Andrew Wan and Jonathan Crow, and cellist Brian Manker assumed the mantle of leadership from Stephane Lemelin, the only artistic director the festival had known in 14 years they presented a vision of bringing in a “who’s who” of top talent from across Canada. At that time, costs and logistics appeared to be a concern, but the lineup has come together according to plan.

“We, individually and as a quartet, know a lot of musicians. We wanted to bring in our friends and colleagues we know so well across Canada to have a superstar festival,” Nowlin said. “We have been successful in doing that. We’re excited to have some of Canada’s best artists coming and playing.”

The festival will open Sept. 7 with the New Orford String Quartet, winners of a Juno Award last year, making their third festival appearance. Their concert will feature the debut of a commissioned work by Canadian composer John Burge, Death of a Lady’s Manwhich is based on a poem by Leonard Cohen. Audiences will be drawn into the quartet with some of the first notes from Cohen’s renowned “Hallelujah.”

Performances of Mozart’s String Quartet No. 19, or “Dissonance,” and Ravel’s String Quartet in F Major, each with four movements, are also part of the evening’s repertoire.
The second concert that weekend, Sept. 8,  will be something different for the festival. A choir from the Studio de musique ancient de Montreal under the direction of conductor Andrew Mcanerney, specialists in medieval renaissance music, will perform lamentations from several different composers.

The final two shows Sept. 15-16 will introduce county audiences to the versatility of violinist Mark Fewer. On Sept. 15, he’ll play a varied set of jazz selections with bassist Joseph Phillips and pianist David Braid. His second performance, Sept. 16, takes on a classical tone as he shares the stage with Nowlin, violinist Benedicte Lazier, cellist Joseph Johnson, and pianist Wonny Song. The event will mix in the works of Haydn, Dvorak, Kodaly, and Canadian composer Murray Adaskin.

“There’s definitely some new faces and a few familiar faces to the audience there,” Nowlin said.

He noted that in setting the lineup this year, the New Orford String Quartet believes it has put together a program that touches on a wide spectrum of chamber music, not exclusively classical music as some might expect.“Hopefully people will enjoy the wide variety of different types of music from the 12th and 13th Centuries up to jazz,” Nowlin said. “I would like to think there’s something for everybody with the festival. We have vocal works, piano recital works, the quartet, other chamber music, and mixes chamber music… There’s a lot of integration of different types of music happening even within the ‘classical’ genre.”

Describing the process followed to create the lineup, Nowlin said it has been an interesting one as having four people serve the role of artistic director is unorthodox and likely unique to the festival. With more voices, one might think it would be harder to develop a vision, but Nowlin said it wasn’t an issue.

“I think for obvious reasons when you take four guys who can’t even agree on where to go for lunch and have them make a lot of decisions artistic and otherwise, you’re taking a big leap of faith to bring us on as artistic directors,” he said. “I had a good sense on most of the big picture things we deal with we were on the same page.”

The details were the bigger concern, he said. With four people involved, the quartet members split up their responsibilities liaising with the festival’s board, speaking with the press, contacting artists, and making repertoire decisions.

“In a way, it’s kind of nice that no one has this huge responsibility. We’re all able to participate a little bit toward the goal. In some ways, we were able to make decisions faster having more people involved.”

Nowlin said the quartet members hope to be in Prince Edward County several times leading up to the festival in order to meet people and feel like a part of the fabric of the community. He is hopeful some different people will give the festival a try.

“We’re always looking to expand our audience. Anyone who lives in the county who may be interested in the festival, but maybe hasn’t gone, we’d encourage them to try us out and see what they think.”