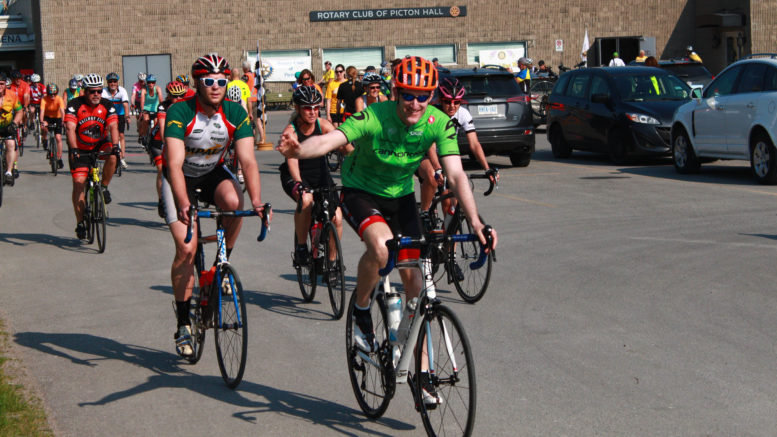 The fifth annual Rotary Club of Picton Lilac Ride brought more than 180 cyclists to the county on Sunday.

Event co-ordinator James Barkman said organizers were lucky enough to have some great weather for the ride despite indications earlier in the week it could rain. In total, 186 riders participated and it’s anticipated the ride will generate more than $5,000 after expenses.

Barkman said the sunny weather contributed to nearly 50 riders registering on Sunday morning while another 140 pre-registered for the event, a record for the lilac ride. Last year 102 riders registered in the weeks leading up to the event.

“It’s absolutely an indicator of the popularity of the event,” he said, noting that many of those pre-registered riders came from outside of Prince Edward County.

Riders often note that one of the best things about the lilac ride is how well it’s organized. Barkman said Rotary strives to make that the case each and every year. The organizing committee comprises about a dozen members who put the event on along with 40 community volunteers. Several of those are avid riders who understand the wants and needs of cyclists, said Barkman.

“We absolutely go out of our way to make sure we’re well-organized, whether it’s the marking of the routes on the roads or the communications sent out to riders,” he said. “We pride ourselves on this and we do watch other events to see what they’re doing and make sure we’re organized.”

Organizers annually survey riders to find out how they heard about the lilac ride. While word of mouth continues to be the prime driver in attracting new participants, the event has relied more in recent years on promotion through social media.

“Social media has absolutely worked for us,” he said.

Proceeds from the event will again target youth initiatives. Barkman said while it’s not certain at this point whether the entirety of the funds raised will go to one organization, Reaching for Rainbows will likely receive a significant portion. The program focuses on young girls who could be vulnerable in the community.

“It’s made a huge difference in their self-esteem, social behaviours, and activities — it’s a great program,” he said.

Anthea Savidge of the Quinte Cycling Club said about 20 members were taking part in the lilac ride this year. Savidge said it’s become an annual event for the club.

“Prince Edward County is a beautiful place to ride in,” she said. “It’s nice to ride with a large group.”

Members usually get out about three times per week once it gets warm, she said. In preparation for the lilac ride, the club’s members spent a few days riding routes in Prince Edward County.

“Along the water is always beautiful and the thing about this ride is it’s so well-organized,” Savidge said. “You don’t really need your map, it’s all marked on the road, they have water stops — I came in this morning and right away I was greeted by someone.”

She said those types of things matter to riders and can be the difference between making it a one-off visit or an annual one.

An added bonus, Savidge said, is Rotary annually hosts a post-ride barbecue and that gives all the riders a chance to mingle and speak with one another.

Fellow Quinte Cycling Club member Dave Harvey said some members of the club know some Rotary members and that’s how they got involved with the lilac ride.

“It’s a good charity to be riding with and it’s well-organized,” he said. “It’s a beautiful day for it.”

Barkman said Rotary wouldn’t be receiving all of the positive feedback from riders if it weren’t for all the volunteers who work to make the ride happen each year.

“They’re an integral part of the whole success of the operation,” he said.