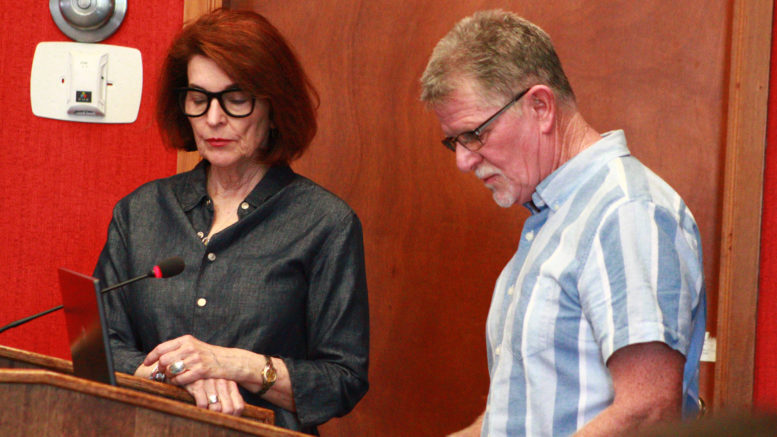 Elizabeth Bloome and Bill Bonter address committee of the whole on May 24. (Chad Ibbotson/Gazette staff)

Councillors have asked staff to investigate agricultural hedgerow and treeline removal practices within the county.

At their May 24 committee-of-the-whole meeting, councillors supported a motion asking for staff for a report on the moderation of hedgerow and treeline removal within the county and asked for recommendations that take into account the municipality’s natural history strategy within the official plan. The motion asks that those recommendations be informed by input from the agricultural advisory committee, Quinte Conservation, and the National Farmers Union. It also suggests those recommendations should take into account modern farming practices and trends within the county, the local topography, field size, and both agricultural and wildlife ecosystems.

The motion was moved by councillor Bill Roberts following a deputation from residents Elizabeth Bloome and Bill Bonter. They said the hedgerows — also known as tree lines, fence lines, or windbreaks — traditionally created a buffer to prevent water and wind erosion of topsoil. In recent years, many of those hedgerows have been removed to allow for larger fields. After doing some exploratory research, Bloome and Bonter found that removal of the barriers could have serious unintended impacts. Those include potential wind and water erosion and loss of topsoil, possible contamination due to water runoff, flooding, loss of carbon sequestration, and more. They asked council to take action to prevent further damage.

“We’re not considering ourselves experts, but we just see a progressive loss of hedgerows,” said Bonter.

While modern tillage practices have allowed for larger fields, issues continue to arise due to the removal of hedgerows, he said.

“We have things happening out west where they’re giving farmers money to reinvest and put hedgerows back,” he said.

The impact of hedgerow removal can be seen across the globe, said Bloome.

“Around the world, in Canada, everywhere where they’ve removed all their hedgerows, they’ve gotten into disastrous problems,” she said. “…People are reinvesting and replanting those hedgerows.”

Roberts said it was an important presentation.

“Certainly, when you look at our natural heritage, our natural history landmarks — those fence lines and those hedgerows — they’re probably the oldest historic reminders of where we come from in the county,” he said.

However, Roberts also questioned whether there’s been enough study around the removal of hedgerows. He said tillage practices are much different than they were 10 or 15 years ago.

“Instead of tilling under your former crop, you’re letting that crop stand untilled and then planting your beans between those two old corn rows,” he said.

He said there seem to be different approaches to the science and noted that, in around 2012, the Ministry of Natural Resources held a seminar in the county in conjunction with Quinte Conservation.

“The upshot of that was they concluded there were no overriding ecological values in the fence lines, or what we’re calling hedgerows here,” he said.

The motion will still have to be approved by council at their June 12 meeting. No timeline was set for the report to come back to council.