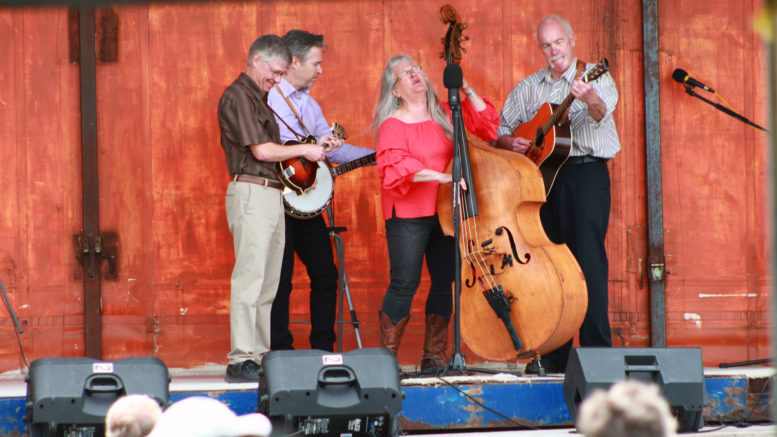 The Quinte’s Isle Bluegrass Celebration marked a decade in the county last week.

The May 25–27 event brought approximately 350 people and about 130 trailers to the campark for three days of live performances from 10 bluegrass acts.

Organizer Melissa Sherman said there weren’t any special additions to celebrate the event’s 10th anniversary, but different things are added each year. One of the things that organizers always do is a raffle for a mandolin and a banjo. This year’s raffle featured a twist — children under 15 could win a guitar without having to purchase a ticket.

“They didn’t have to buy the raffle tickets and a nine-year-old from Hamilton won,” she said. “They’ve been coming for the last four years with all their kids and family.”

Sherman said it’s the perfect age to start learning to play guitar. The instrument will be presented in the near future and a video will be posted online.

While some forecasted inclement weather may have kept some visitors away, Sherman said she was happy even though the event missed its attendance goal.

“I’m always happy, if one trailer showed up I would be happy,” she said. “… Apparently, there was a lot of rain forecasted and it was raining around us, which stops people and we had gorgeous weather. We didn’t have a drop of rain.”

Sherman said the organizers aren’t in it for the money and as long as the show can raise enough to offset costs, they’re happy. She said missing the mark this time won’t stop organizers from moving forward.

“We don’t want it to be 500 trailers, that’s not what we’re after,” she said. “Bluegrass is a family and it’s a small gathering, it’s a celebration.”

There were a lot of walk-ins this year, which is a positive.

“That’s great because those are the locals that are coming,” she said. “We still have locals come and say, ‘we never knew about this.’”

She said another positive thing to take away from the event was how many children attended. The celebration helps introduce bluegrass to a new generation, Sherman said, and it’s the passion to keep bluegrass music alive that keeps her going after 10 years.

“I’m a bluegrass musician, I’ve been in bluegrass my entire life,” she said. “Bluegrass is a diminishing genre in Canada … for me, it’s saving the music and not letting it get lost into a sub-genre of something.”