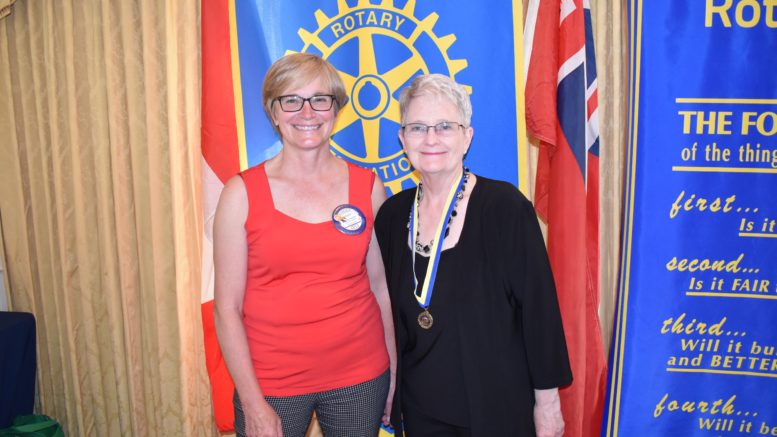 It was an evening to celebrate goals achieved and an evening for future goals to be set as the Rotary Club of Picton held its annual Past Presidents’ Night at Waring Hall Tuesday.

Outgoing club president Sandy Latchford was offered a chance to reflect on the past year of her tenure and incoming president Brenda Hellyer outlined her vision of what the next 12 months for the local service club will look like.

Latchford, a nine-year club member, looked back on 2017-2018 and is happy the club was able to meet and exceed its goal of raising $45,000 to be dispersed to local and global projects in the upcoming year.

The now past-president said fundraising these days has become an increasingly difficult task if only because of the many great initiatives that are also seeking dollars.

It’s increasingly difficult because a lot of the causes need more. It’s not uncommon for not-for-profits to have $150,000 operating budgets and the entire $45,000 could be swallowed up by one great project but we want to divvy it up locally and internationally.

The club undertakes a number events and initiatives both within its weekly meeting structure as well as regular events like the annual Waterfalls Tour, the Wilf Harrison Memorial Golf Tournament and the recently completed Lilac Ride cycling event which featured a record number of entrants in 2018.

Internationally, the club has supported the building of a hospital in developing nation on the continent of Africa as well as clean water initiatives in developing countries around the globe.

With all these worthwhile causes and hosts more, it’s not hard to see why the Club remains on the forefront in the community and members can be seen hawking Rotary cash calendars or manning charity barbecue stations in order to address needs both home and abroad.

“That’s the part that’s different from 75 years ago when our club gat started,” Latchford said. “Back then, you could raise $1,000 and it would go a long way and be a fortune to a cause but today that amount is a drop in the bucket.”

Hellyer said that under her watch, the popular fundraising events that garner so much interest and funding wouldn’t change.

What might be different is the clothing Rotarians are wearing at these events and others in the community.

Branding as a mode of promotion and recognition is an intiative being promoted by Rotary International and Hellyer, sporting iconic blue and gold rotary wheel earrings Tuesday night, is leading the charge.

“There are new t-shirts and clothing — all our barbecue chefs wear Rotary aprons — and that helps with prospective membership outreach in the communities where Rotary is present,” Hellyer explained.

In terms of the club make up, Hellyer said it is imperative that the Rotary Club of Picton attracts new members and those seeds might have already been planted.

PECI students that attended SOMA 2018 are reportedly interested in the venerable service club organization and want to see if a young persons’ version of the organization could take root at the local secondary school.

Rotaract is a youth derivative of Rotary for people 18-30.

“If we can get them interested at 20 years old that would certainly help,” Latchford added. “That seed was planted this year and I’m hoping that we can follow up and see if we can get some youth engagement.”

A modernization of the meeting rules of Rotary might help with membership attraction and retention as well.

In previous years, the club was bound to meet four times a month at a central location however the new rules are much more flexible in terms of meeting place and frequency.

The club will also feature its own brand of suds at a few local watering holes.

Local Lager, a joint venture between the Peterborough and Guelph Rotary Clubs is a light and dry beer brewed by Wellington Brewery in Guelph that’s available at the Acoustic Grill, the Waring House and Waupoos Pub Market and Eatery.

Overall, the incoming club president laid out ten goals for the 2018-19 year, many of which concerned increased membership, better attendance at regional and district functions, more social events and more engagement with the Rotary Club of Wellington.

And Hellyer, who is approaching two decades as a member of the local club, is counting her fellow members to hear the call of engagement in Rotary initiatives

“Those are great goals and I’m hoping the members recognize how ambitious these goals are and support them,” Latchford added.