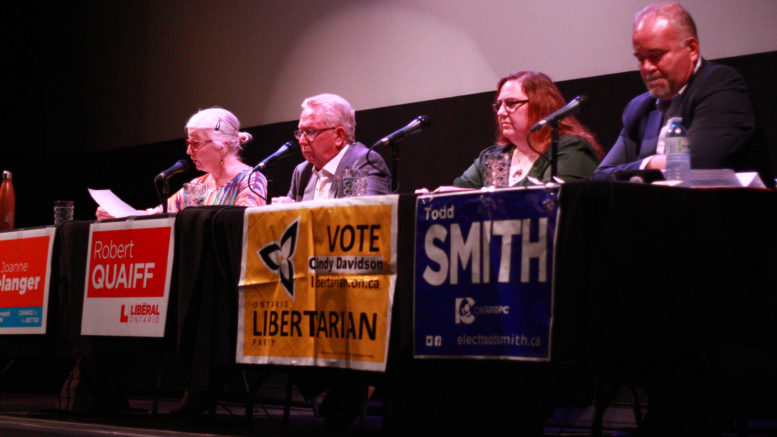 Agriculture and the economy were top of mind as Bay of Quinte riding candidates took the stage at the Regent Theatre.

The May 30 debate was jointly hosted by the Prince Edward Federation of Agriculture and Prince Edward County Chamber of Commerce and saw candidates take both prepared questions and queries from members of the public. It was remarked the crowd appeared to be the largest the candidates had faced to date.

The first question of the evening came from the federation of agriculture and asked whether the candidates’ parties would support an increase in the annual cap on the Ontario Risk Management Program (RMP) and allow unspent allocations to carry over into the next year. The RMP helps producers mitigate unforeseen issues such as varying costs and fluctuating market prices.

Belanger said the NDP platform includes an increase in the RMP cap. While there’s nothing in the platform about allowing unspent allocations to carry over, she said if elected she would take that discussion to Queen’s Park.

“We have to ensure our farmers are protected, certainly in terms of any undue events that affect their production,” she said.

“We’ve had this conversation in the past and they’re very receptive to it,” said Quaiff. “I’m going to continue to do that and I do support the RMP.”

He said there also has to be more sustainable funding for the program.

Davidson said the Libertarian party takes a different approach than most other parties. She said they would look more toward the private sector.

“What we would do is actually probably leave the subsidization the same and put more onus on private insurance to do more for the farmers instead of having government do more,” she said.

She said the allocation should roll over year to year.

Smith said the Progressive Conservatives have already announced they will increase the RMP by $50 million.

“As far as carrying it over, that’s a discussion that we’re going to have to have,” he said. “We can’t give that promise here tonight, but certainly we are going to increase the risk management plan.”

He said agriculture is the primary driver of the provincial economy.

The candidates were also asked what they would do to address domestic labour shortages that cost the agricultural sector $436 million in 2014. That shortfall is projected to rise to 46,600 vacancies by 2025.

“We want to see more of our non-government options promoted within the communities,” she said. “We also think that other youth organizations should collaborate with the agricultural sector to provide programming.”

Smith said it’s imperative that the next generation get and stay involved in agriculture.

“We are a leader in Ontario when it comes to agri-business, but we should be doing so much more,” he said.

He said many farmers can be hesitant to have their children get involved because of the risk.

“One of the things we need to do is increase the risk management plan and we need to make it a little more certain that you can make a profit as a farmer or working in the agri-business field,” he said.

Belanger said the NDP have put forward a number of initiatives in their platform to tackle the issue. She said they would create a 10-year $1 billion fund to bring broadband service to rural and northern Ontario and would invest $100 million in natural gas expansion to rural areas.

“We will support investments to turn farm waste into biogas and connect this renewable energy alternative to Ontario’s natural gas grid,” she said.

She said the party also plans to expand the Greenbelt to increase economic opportunities for farmers and local producers, and would work with farm groups to help young farmers join the industry.

Quaiff said he’d like to see a substantial increase in the RMP and said he’s seen first-hand that farming isn’t for the faint of heart.

“Innovation definitely needs to be put in place,” he said.

He said as chair of the Eastern Ontario Wardens’ Caucus last year, he helped that organization push for rural broadband expansion. He said he also pushed for natural gas expansion into rural Ontario and the Liberals have made efforts to reduce electricity bills, which would all help address the issue.

Turning to the economy, the chamber asked the candidates what their party would do to balance the budget and questioned why voters should believe the promise.

Quaiff started off by saying the Ontario economy is growing and unemployment rates are at record lows. However, he said the provincial government felt there were people being left behind and deficits were necessary to provide assistance.

“The Ontario Liberals have a plan to bring the provincial budget back to balance in a few years,” he said. “…Why should you believe me? Because I have experience in this area and I just want the opportunity to go to Queen’s Park and prove it to you.”

Davidson said the Libertarians have never had a sitting MPP, so there isn’t much collective experience in governance. However, she said the party would seek to reduce taxes and subsidies.

“We like working with the private sector, working with our non-profits and our charitable organizations, to take over a lot of the social programming that right now we’re reliant on government for,” she said. “…Why should you believe me? Well, because you don’t have a reason not to.”

“When you don’t balance the budget, you’re continuing to add to the province’s debt,” he said.
He said the province is approaching $380 billion in debt, requiring debt-servicing payments of more than $1 billion per month.

“We have taken a very cautious approach and we will not be balancing the budget in either of our first two years,” he said. “We have to get in there and see what kind of a mess exists, but we do promise to balance the budget in years three and four.”

Belanger said her party would run a deficit for the first three years of their mandate “to turn the ship around.”

“Going forward after that we have an upward trend moving toward a balanced budget,” she said. “Why should you believe we can do this? Because historically NDP provincial governments across Canada have produced balanced budgets going back to the time of Tommy Douglas.”

She acknowledged the anomaly in that statement was Bob Rae’s reign as premier, but said that government inherited debt from a previous government.

In another chamber question, the candidates were questioned about accounting practices. It was noted the auditor general’s review of the 2018 pre-election report on Ontario’s finances concluded that the government’s report understated deficits for the next three years by about $6.5 billion annually. The representatives were asked about their party’s plan to realign Ontario government accounting practices with those supported by the auditor general.

Smith said the auditor general is independent and unbiased and the conclusion is “unprecedented.”

“It’s very, very important that we get back to using Canadian acceptable accounting standards immediately so that taxpayers have a transparent way of knowing how their dollars are being spent,” he said.

Belanger said the NDP respect the auditor general’s report and indicated it raises serious questions about how governments account for their spending.

“Our budget at the back of our platform is based on recommendations by the auditor general, so we’re going to begin implementing those recommendations immediately,” she said.

Quaiff said while the Liberals appreciate the auditor general’s analysis, they feel the report is transparent and appropriate. He indicated the pre-election report came out of the 2004 Fiscal Accountability and Transparency Act.

“The Ontario government sought expert opinions from within and outside the government, including world-class accounting firms,” he said.

Davidson said the Libertarians would look at economic models from around the world. She noted that 20 years ago New Zealand was in a similar situation as Ontario and that government took on third-party auditors to root out waste.

“We as Libertarians would do something similar,” she said.

As moderator and Prince Edward Federation of Agriculture president John Thompson opened the debate to the floor, candidates heard questions ranging from wind turbines to social services and healthcare.

One of those questions came from Picton resident Keith Taylor. His daughter, Andrea, was forced to go to the United States for a life-saving operation after a funding request was denied by OHIP. The family was able to raise $175,000 through community donations to cover the cost. Taylor questioned whether the candidates, if elected, would discuss the plan with him.

“OHIP should be working for us, not against us,” he said.

“If I’m your elected official at Queen’s Park we’ll certainly sit down and have a conversation with you about access to services,” she said.

Quaiff said his door is always open. He said he and rival Todd Smith both advocated on Andrea’s behalf.

“It’s so nice to see her back and see her on Facebook smiling again,” he said.

Davidson said the story resonates with all the candidates. She said it also demonstrates the Libertarian strategy.

Smith said he and his office worked diligently to try to get the government to move on the issue.

“Navigating through those bureaucratic hurdles was very, very difficult,” he said.

He said services have to be there when people in the community need them.