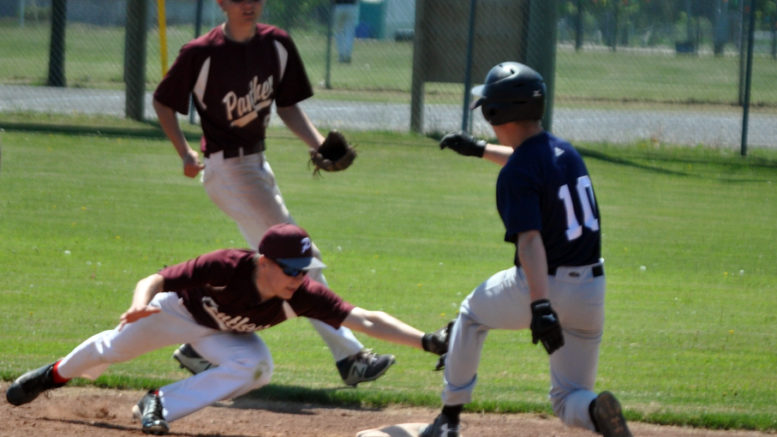 Race to the bag -Panthers second baseman Jordan Stacey lunges to tag a St. Mary runner as shortstop John McHugh looks on. The infielders are two of six graduating vets who will be missed. (Adam Bramburger/Gazette staff)

The PECI Baseball Panthers put themselves in position to return to OFSAA competition Tuesday, but they couldn’t close out the championship game.

Following up a 3-2 loss in the Bay of Quinte Conference final to the St. Theresa Titans, the Panthers faced Kawartha’s top-seeded St. Mary Thunder in a semifinal that morning in Melrose. The Thunder threatened early, but the Panthers would hold on for a 3-2 win.

The Thunder scrapped one run in the first as pitcher Graham Dickerson singled, then teammate Braden Halford knocked him home with a double.

Panthers pitcher Braedan Kelly rebounded from the early run and however and didn’t allow another runner into scoring position until the bottom of the sixth inning. He’d strike out five and walk three over the course of the game.

Offensively, Kelly helped his cause with a lead-off single in the fourth — his second hit of the game. He’d get to second on Ben Wells’ long fly ball to centre field, then to third on a Brodie Byford hopper back to the mound. Fellow senior John McHugh picked Kelly up with a single to left field that would tie the ball game.

The Panthers would finally get to the stingy Dickerson again in the sixth inning with a rally that would decide the game. Will Ronan started the effort with a double to centre. Kelly strode to the plate after him and pounded another ball out of reach up the middle for an RBI double to score pinch runner Cooper Rogers. Wells knocked him in.

Coach Matt Ronan said Kelly was dominant in every facet of his game that morning.

St. Mary grabbed an unearned run back in the sixth inning, but the Panthers were able to hold them off and advance. Byford came on in relief to get the game’s final three outs. He started by picking a runner off at first just after entering the game, forced a batter to pop up, then struck out the final out.

In the other semifinal, the Titans had a 4-1 lead, but the Fenelon Falls Falcons rallied to reach the final game. The Panthers’ leadoff hitter Walker DeRoche scored in a first inning where they managed four hits but only cashed in a single run. The rest of the game, PECI would struggle to match their hits in that inning. They got two more runs across the plate, but the Falcons did a better job manufacturing runs on mistakes to win 5-3

“We threw the ball around a few times and it proved costly,” said Ronan. “Errors will happen and good teams capitalize on errors. Maybe two of those runs were earned. They capitalized on our mistakes, we couldn’t capitalize on theirs. That was the story. They were very aggressive, kudos to them.”

Ronan said his team struggled to hit the ball and, at times, were over aggressive and out in front of pitches that game.

“We were looking for pitches to hit, but if we made contact, it wasn’t solid contact,” he said.

The coach called the loss “disappointing” as he thought it was a winnable game after they played really well against an experienced Thunder team and looked to have more depth than the Falcons.

Still, the Panthers had a solid campaign again this year.

“Our overall runs for and against was 68-13 throughout the season. We have a very good team. We were COSSA silver medalists and played a game that could have gone either way until the seventh inning. It’s nothing to hang your head about.”

Ronan credited his players for putting in months of work to get to the point where it has become everyone’s expectation to play meaningful games this time of year.

Six key players graduate from the PECI program this year. They include: Kelly, whom Ronan said put in a lot of hard work this off-season and was rewarded by being the team’s most valuable player many nights; McHugh, who offered versatility as a pitcher, shortstop, and centre fielder and leadership;  DeRoche, who became one of the Panthers’ most reliable hitters this season; Chase Lavender, a confident dedicated leader; Jimmy Kuipers, whom Ronan described as a “Gold Glove third baseman,” and Jordan Stacey, a valued middle infielder.

While the coach said their contributions will be missed, Ronan said there is great depth coming up from the younger grades that should keep the Panthers in contention yet again in 2019.