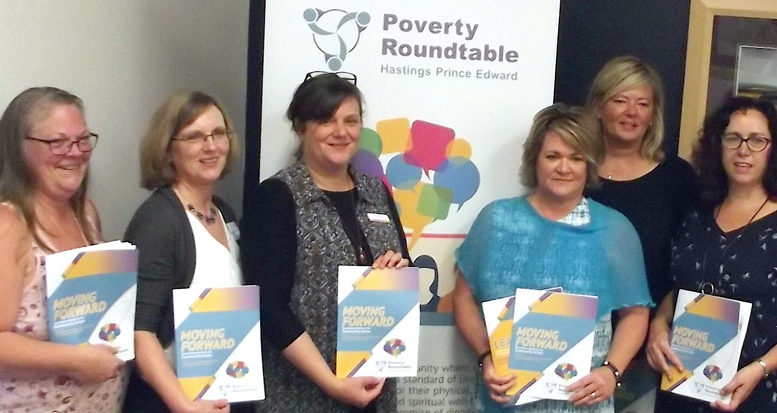 Population living in low-income households has risen over 10 years

While solving the problems causing poverty may not be easy, relieving the issues poverty causes is a different story, and the Poverty Roundtable for Hastings Prince Edward is determined to do just that.

After several years of meetings, consultations and conversations, the Roundtable has produced two reports released on Monday, May 29. The first, Leaning In, outlines what the group learned about the causes of poverty and what people living in poverty are saying about what they need and how the social safety net is not working. The second, Moving Forward, provides a wide series of concrete recommendations that, if implemented by governments and organizations, would provide that help.

“Living in poverty is crisis,” said Poverty Roundtable director Christine Durant. “Living in poverty is trauma.” So what is considered a low-income household? For a single person household, the after-tax threshold or low income measure was $22.460 in 2015. The percentage of local people living in poverty has increased between 2005 and 2015 (the most recent statistics in the report). Hastings has gone from 15.3 percent of households in poverty to 16.3 per cent, while in the county that number has increased from 12.7 to 13. 5 per cent.

Durant said the Roundtable identified several causes of poverty, including an increased cost of living, accidents or illness, people having to quit or reduce work to care for family members, job loss and seasonal jobs. In both Hastings and Prince Edward, seasonal and part-time jobs make up more than 50 per cent of how the working population is employed. The Roundtable discovered that a big problem is lack of income (whether from employment, social assistance or a combination) to meet basic needs, which in turn creates a lack of access to affordable housing (currently at a crisis level), food and access to health care, such as oral health and prescriptions. People living in poverty repeatedly told the Roundtable that the social assistance system needs reform, because it is simply not working.

“People don’t realize the depth of the issue,” said Ruth Ingersoll of the Community Development Council of Quinte. “People don’t have enough money to live.” She said food insecurity is a big issue. “Food is a basic human right, and it needs to be recognized as such,” she said. Tami Downes addressed another problem: lack of support for people such as grandparents who are caring for the children of other family members. She said grandparents receive under $300 a month per child, while foster parents receive three times that for caring for unrelated children. “We need more money,” she said. “We need more family-centred options.” So what can be done? Some of the main community recommendations include:

– The community and the province should work with employers to remove barriers to employment and provide mental health support at work.

– Immediately raise the amount of money provided by the social safety net, such as disability, Ontario Works, Canada Pension and the Guaranteed Income Supplement while a universal basic income is being developed. These programs also need to be simplified, and clawbacks for earnings while on these programs need to be removed until the person is earning above the low-income line. n Make improvements in health coverage to include dental benefits and universal pharmacare.

– Enhance income and refundable tax credits for caregivers of dependent or ill adults and for family members such as grandparents who have guardianship of dependent children of relatives. n Address food insecurity by transitioning from food hampers to grocery cards.

– Increase access to financial services for low-income people such as non-profit debit management and credit counselling for people with overwhelming debt and free legal advice on debt issues.

People are encouraged to attend the all-candidates’ meeting for the Bay of Quinte riding between 3:30 and 5:30 p.m. this Thursday, May 31, at Eastminster United Church, 432 Bridge St., Belleville, and find out how the local candidates plan to address the many issues and proposed solutions to poverty in Hastings and the county.