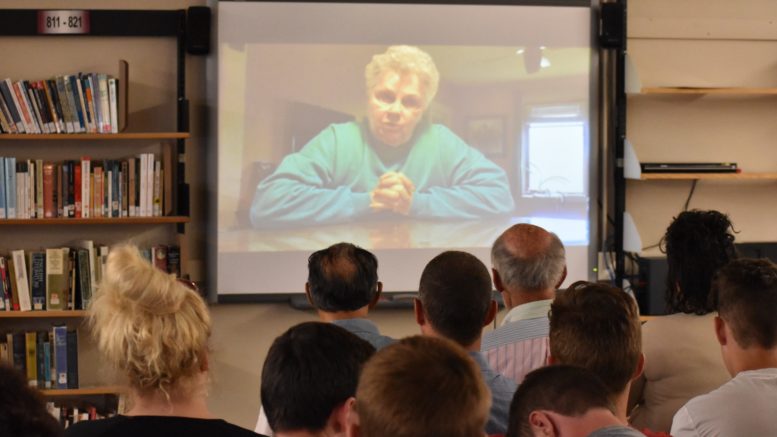 History came to life at Prince Edward Collegiate Institute on Tuesday as the brainchild of a local historian and documentarian came to fruition.

The shool’s Grade 10 Venture class presented their local history videos at PECI’s library to an audience that included many of the interviewees and subjects as well as Hastings and Prince Edward District School Board Superintendent Cathy Portt.

The video vignettes ran about three to five minutes in length and covered a variety of locals subjects, stories and tales ranging from Camp Picton to the Marysburgh Vortex to famed farmer, athlete and politician Keith MacDonald.

These videos were produced under the mentorship of local historian and documentarian Peter Lockyer.

It was Lockyer’s idea to approach the HPEDSB about a local history component to the secondary school curriculum and the pilot project that saw three classes (one at PECI and two at Quinte Secondary School in Belleville) undertake the challenge of sourcing relevant topics, interviewing subjects and researching material and creating a multimedia video presentation.

Afterwards, Lockyer was astonished with the final products the students were able to debut on Tuesday and admitted there were a few historical nuggets unearthed in the pieces that even he didn’t know.

Lockyer told the Gazette he himself wasn’t much a student when he matriculated PECI “centuries” ago but found his passion at the post-secondary level when he documented the rise and fall of Prince Edward County’s canning industry.

“I was sitting there, interviewing all these seniors who had all this this knowledge of the canning industry in Prince Edward County and I realize I’m sitting this great untold story of my hometown at a time when it was making national headlines,” Lockyer said. “I really became engaged with history then and there.”

And for decades, Lockyer has told local stories that have had lasting regional, national and international impact through his History Lives Here production company but is realizing there will need to be future torch bearers if local history is to live on and be celebrated.

“The goal was to transfer my passion and my experience on to the next generation because we need to reach them and make sure these stories get passed on to the next wave of community leaders and volunteers,” Lockyer said.

It’s expected HPEDSB will expand the project into all secondary school curriculums in time for next school year and Lockyer said that the research, photos and transcripts from each project will be presented to local archive organizations.

Krista Richardson of the County of Prince Edward Archives was on hand to accept each project from the Grade 10 students.

These students are engaging seniors and experts that have first-hand knowledge in important topics like war, immigration and industry and it’s so important that we preserve that history before it’s lost to time,” Lockyer said. “These digital interviews and transcripts will be preserved.”

PECI educator and Venture Program instructor Greer Koutroulides said she knew from the start the project could be something her students could excel with.

“But they exceeded even my expectations,” Koutroulides explained. “Everyone of these projects were well researched and well sourced.”

Koutroulides thanked the community members that volunteered their time to be interviewed and donate use of historical photographs, many of which have never been made public.

“I know the students enjoyed taking part and completing this project and for many of them, it was a realization about the rich history Prince Edward County has. There is certainly a new level of appreciation for the times that came before them,” Koutroulides added.