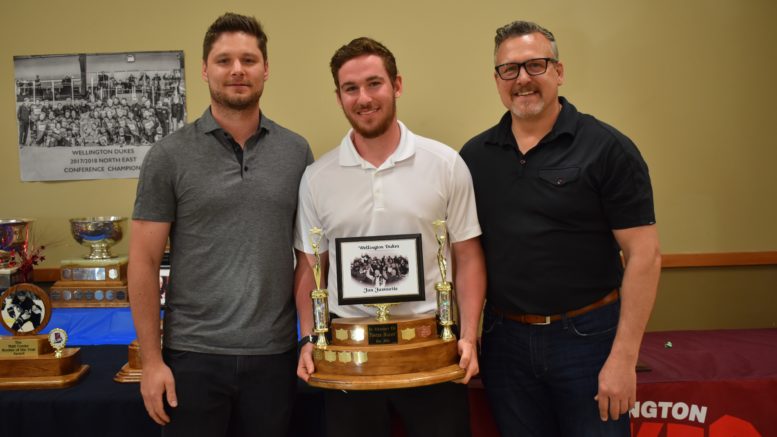 After receiving heroes welcomes on their return from both the Dudley-Hewitt and Royal Bank Cup tournaments, the Wellington Dukes organization offered a slightly subdued banquet celebration on Saturday night at the Highline Hall.

That’s not to say there wasn’t the usual pomp and circumstance surrounding the annual get together where individual efforts are heralded and team accomplishments are lauded but with the memories so fresh in the minds of the fans, parents, billet parents and sponsors not to mention the hockey players themselves, Saturday night almost took on a mood of complete satisfaction.

And why not after a roller-coaster season that saw Wellington make it to the summit of Canadian Jr. A hockey and just miss out on planting the Dukes flag in Chilliwack at the 2018 RBC?

There were plenty of cheers, lots of jokes and a few teary moments, and in the end, the feeling that this very special chapter in the hockey club’s collective history would be pored over again and again for many years.

Club Executive President Doug Robinson remarked that the smallest club in Canadian Junior A hockey per capita was very much like a family and recalled how fans flocked to this vary hall in great numbers to watch their beloved team compete in Dryden and Chilliwack in the month of May.

“Over 400 people in this hall, cheering you on,” Robinson told the player of the support they had here at home while they battled in other time zones, representing the village and Prince Edward County proudly. 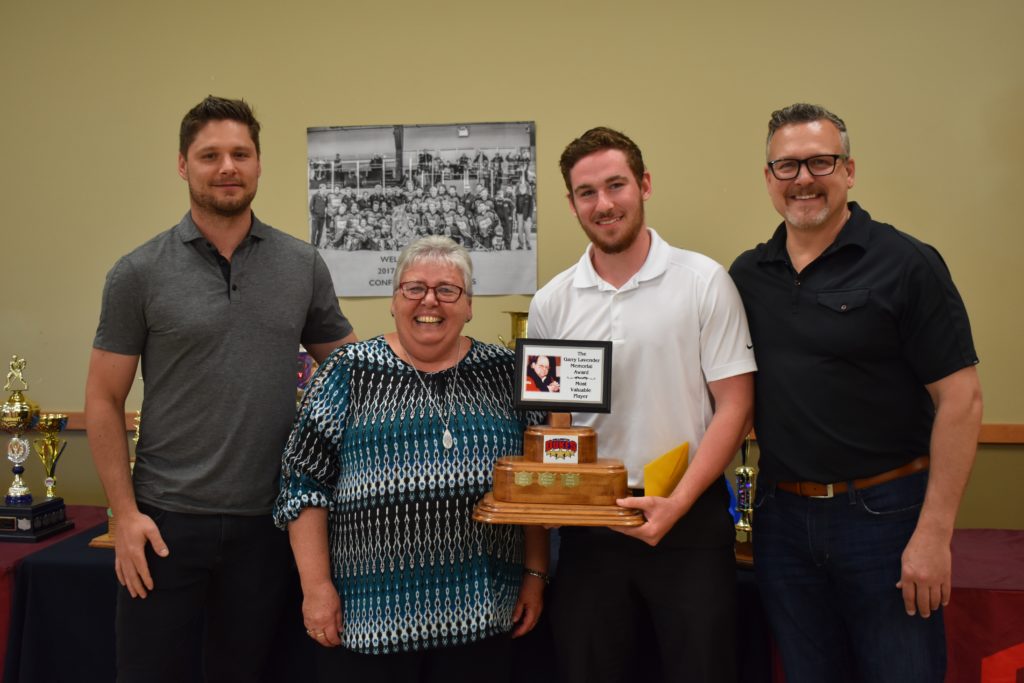 The season started with drastic change in the organization and many didn’t know what would become of the hockey club in the days following long time Coach and General Manager Marty Abram’s resignation.

But Robinson recalled that it had been change that had been part of story line in both of Wellington’s previous appearances in RBC championships.

Abrams had just come aboard a couple of seasons prior to Wellington’s first deep playoff run in 2003.

The passing of club patriarch Garry Lavender led the organization to a restructuring and Micheal Mulvihill coming aboard about the time Wellington would play for Jr. A hockey supremacy in Camrose, AB in 2011.

Then, this past offseason, another major transition saw another new ownership group come in and, once again, Wellington hockey fans would wind up being delighted by the on ice product that gave the home side supporters chills and thrills all year long-right up until the final game of the Canadian Junior Hockey League’s ultimate game.

“So, looking back, maybe change isn’t always such a bad thing,” Robinson said.

And there’s going to be more changes ahead according to Wellington Dukes Vice President of Hockey Operations Randy Uens.

Under his watch, the club made a late season change in coaching and managerial staff that wound up paving the way to Wellington’s third Buckland Cup championship.

“Change is difficult and we will be making a few more and I hope people will see that they are going to make the organization stronger and more sustainable,” Uens told Wellington Dukes supporters.

Uens reflected on the operation of the hockey club and how it went from a non-profit board to an owned entity with strong volunteer base. 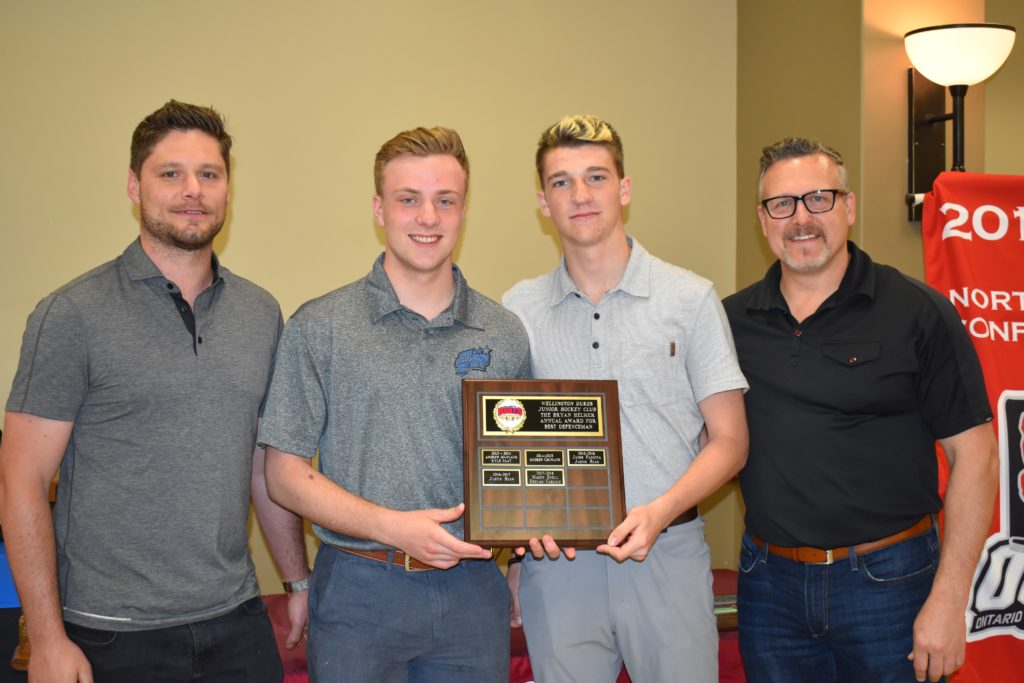 “These two groups now work in unison and we really need each other to be successful and sustainable,” Uens said. “The budgets for teams at this level have gotten outrageous and for us to be sustainable in a small community like this, we need everybody’s support to make it work and you’ve shown us that this season so thank you.

In his remarks, team captain Colin Doyle thanked the booster club, game day staff, coaching staff, training staff, equipment staff, and billets for all the things they do- both on game and behind the scenes, large and small, that often made the difference this season.

But most of all, it was the Dukes army in the hostile arenas around the OJHL, in Dryden at the Dudley-Hewitt Cup or in Chilliwack at the RBC that Doyle will remember.

“ I’d like to offer thanks on behalf of the team, to the fans,” Doyle said. “It’s an amazing level of support and just goes to prove what I’ve been saying all year and that’s the we have the best fans in the Ontario Junior Hockey League.”

Doyle, an emotional leader that came from humble beginning as a graduate of the Campbellford Rebels at 17 to being one of the most respected and revered leaders in Wellington Dukes history, took one final moment to thank his teammates.

“I love everyone of you guys like brothers, if you would have told me we were 20 minutes away from an RBC, I would have told you were crazy but we made it there and you guys made my last season Wellington so special,” Doyle said.

Among the award winners Saturday evening were: 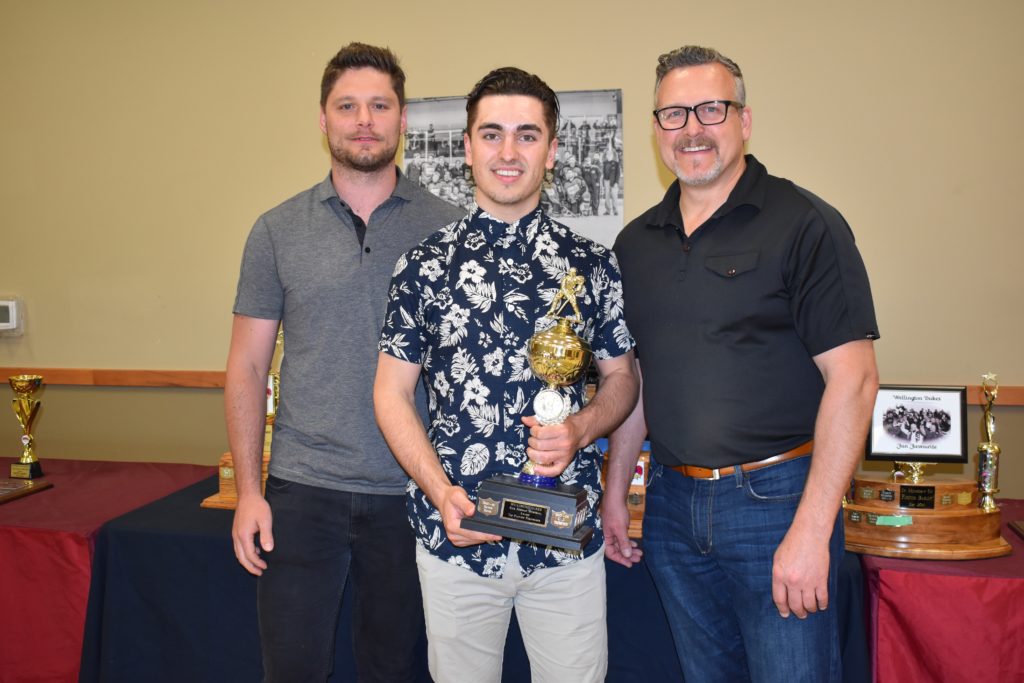