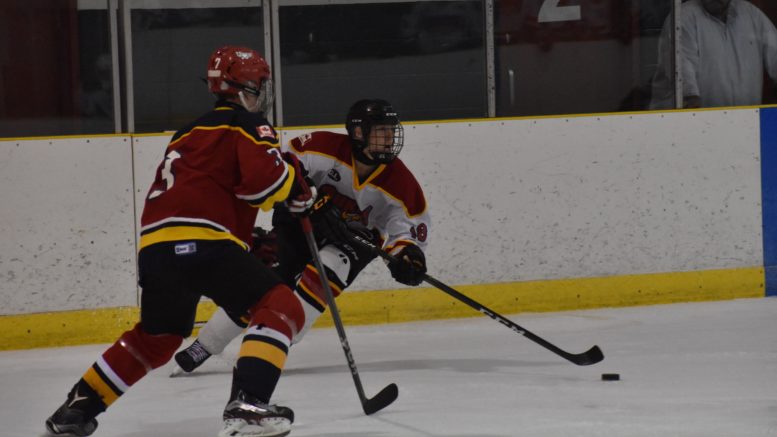 Wellington Dukes general manager Todd Reid can recall the last time the organization was tasked with going into a late summer training camp without the benefit of giving prospects at least a once over by way of a spring mini-camp.

Not surprisingly, the club took a pass on mini camp in the spring of the 2011 when Reid was part of the club’s coaching staff and Wellington was fresh from a deep playoff run to that year’s Royal Bank Cup in Camrose, AB.

And while these spring scrimmages can provide a mixed bag in terms of recruits for the upcoming season, Reid and the hockey club should be lauded for keeping the wheel to the grindstone and putting on a slightly smaller than regular camp.

Two teams of prospects bolstered by Wellington regulars Declan Carlile and Daniel Panetta took to the ice the Wally Dever Arena in Belleville this weekend hoping to impress the Dukes braintrust in attendance.

Reid along with head coach John Druce and assistant Derek Smith watched a number of players from as far away as North Bay play in scrimmages on both Saturday and Sunday.

“We were excited about some great young local players and there was some great goaltending on display as well,” Reid told the Gazette. “I’ve seen a good number of these players play over the past few seasons so this weekend was as much about John and Derek being able to see some guys and they are pretty excited about some players.”
Among the standouts was Dalton Bancroft, son of former Belleville Bull great Steve Bancroft. The Saginaw Spirit draft pick had an outstanding season for the St. Mary’s Lincolns of the Greater Ontario Junior Hockey League, putting up 21 goals and adding 18 helpers for 39 points in 42 Jr. B games as a 16-year-old player.

A Quinte Red Devils grad, all indications are Bancroft could join Wellington if the Spirit decline to sign him.

“He’s a great young talent, has some size and can score,” Reid said. “It appears he’s committed to Wellington if things in Saginaw don’t work out.”

Another forward Wellington was eyeing was Quinte Red Devil product Jacob Vreugdenhill who was nearly point per game player for an outstanding Minor Midget squad.

“There’s a lot of really good Minor Midget players graduating out of Quinte next season and Jacob might be a player that goes unnoticed by some but he’s got a lot of speed and he’s a character player that does everything well. His previous coaches including Evan Robinson speak very highly of him,” Reid said. “In the playoffs (Robinson) had him lined up against another one of our AP’s in Ethan Cardwell. Jacob was winning draws and taking care of his own end and was able to shut Ethan down.”

On the back end, Quinte Red Devil Ben Roger found himself in the Wellington lineup as an AP in some high leverage playoff games and even the small sample size of Jr. A action appears to have helped as Roger was one of the best blueliners in camp.

“We’ve developed a positive relationship with Ben through the playoffs and he’s really adept at moving the puck,” Reid said. “Like any young defenceman he is a work in progress but we really liked both Ben and (fellow Quinte teammate) Cole McGuire’s camp this weekend.”