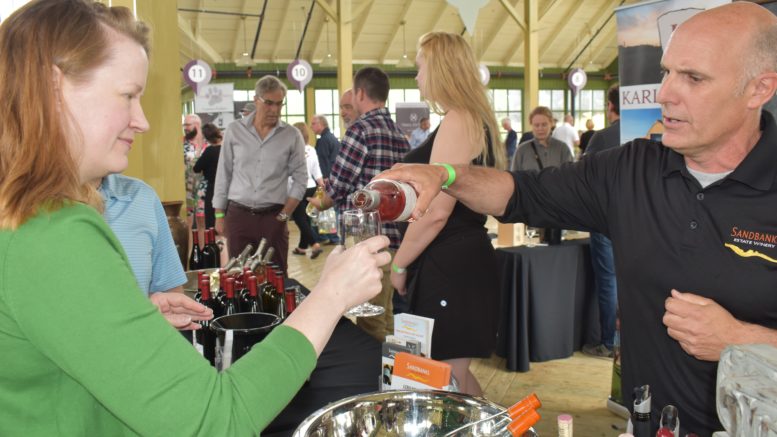 If Taste! Is designed to celebrate the harvest and Wassail and Vinterfest are to celebrate the off (or aging season) then Prince Edward County Winegrowers Association’s Terroir event this Saturday at the Crystal Palace was all about the local winemakers.

All told, 22 of the county’s top wineries and winemakers gathered for the late spring celebration that featured local food and fare, teach and taste sessions with experts Lynn Abernathy and Christopher Wilton and, perhaps most importantly, new vintages some of which had yet to be formally released. Both the sips and the sounds were heavenly at Terroir Saturday afternoon. (Jason Parks/Gazette Staff)

Duarte Da Silva, Executive Director of PECWA, said Terroir is an event held to celebrate the winemaker and their craft and as well as an opportunity for wine fans to explore wines and wineries that they maybe didn’t know about.

“This is 22 wineries all in one location, Da Silva said. “It would take you a couple of days drive around the county and sample each of these wines at the various wineries so it’s wonderful to see so many people taking the opportunity to taste new releases and new wineries.”

Some of the hot spring releases being uncorked on Saturday included a variety of rosé’s, some aromatic whites and even some reds that have been aging for a couple of years.

Sommeliers Abernathy and Wilton offered educated tastings on pinot noir, aromatic whites and sparkling varieties and the cross-section of types of that were tested in each session is a sure sign that the wine industry in Prince Edward County has not only arrived-it now thrives.

“We are no longer a burgeoning region that’s labeled up-and-coming or the scrappy little kid of Ontario wine,” Da Silva said with a laugh. “Waupoos Estates is celebrating 25 years and some of our members are upwards of 20 years old so this region has come a long way.”

Vintages grown and aged in Prince Edward County are now getting the recognition that winemakers deserve -international, domestic and otherwise- and wine produced here is on par with any other region and beats them in blind taste tests according to Da Silva.

“In the big picture we are 20-30 years younger than the Niagara but we have come a long way in a short period of time and we all owe that to the vision and tenacity of the winemakers, vintners, viticulturists that are working hard in extreme conditions and a cold climate region. Today we celebrate those efforts and it’s no longer a secret we have seriously delicious vines that are producing world class wines,” Da Silva said.

The chardonnay and pinot noir varieties will likely continue to be the star of the Prince Edward County wine show in terms of varietals however Da Silva believes there’s room for others in the rack as winemakers continue to experiment.

“Cab franc or gamay and the reds, skin contact whites in addition to pinot gris and sauvignon blanc are some other varietals,” Da Silva offered. “Pinot Noir and chardonnay will always be on the forefront because that’s what makes sense here but winemakers are always pushing the boundaries of styles and process. We will build on the reputation as a leader in cool climate pinot and chard but also expand that repertoire to include interesting, very drinkable wines.”