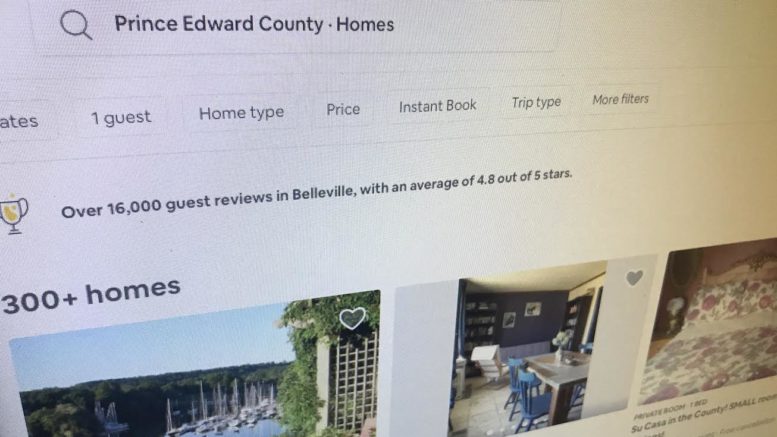 A potential agreement with AirBnB could generate funds for the municipality in the future. (Chad Ibbotson/Gazette staff)

It appears a short-term rental company is open to an agreement that could see the municipality gain a significant new revenue stream.

During the meeting, Bednar and Dagg revealed AirBnB were getting ready to implement their first accommodation tax remittance partnership in Canada. That partnership comes into effect Aug. 1 this year in Ottawa.

“They’re using four per cent as their template,” said Roberts.

Roberts told the Gazette the AirBnB officials recognized Prince Edward County as Ontario’s fastest-growing wine region and noted that there were 40,000 total guest arrivals in the county through the platform in 2017. Those rentals represented about $5 million US in total host earnings. In the county, a typical host can earn close to $8,000 US annually.

With a population of about 26,000 there are approximately 600 unique county listings on the site. If that four per cent tax remittance were applied to the 2017 figure of approximately $5 million US, it could translate to an additional $250,000 CAD per year.

AirBnB and other short-term accommodation sites allow owners to rent out their homes or rooms nightly to third parties. Concern around these types of companies has been growing both locally and nationally, due in part to a dearth of affordable housing and other issues.

The councillors told Bednar and Dagg the municipality is currently consulting the public regarding short-term accommodations and made the case that there is a lot of taxpayer investment in Prince Edward County that benefits AirBnB.

“We discussed the impact on housing prices, affordable housing, long-term rentals, homes for workers in the county, absentee ownership et cetera,” he said.

Bednar and Dagg indicated AirBnB would be happy to work with the municipality, noting the company has “Voluntary Collection Agreements” with more than 275 jurisdictions across the globe that remit over $240 million US back to those jurisdictions.

“The standard drill for AirBnB is to work with the municipality and negotiate a memorandum of understanding which ends up becoming a bylaw,” said Roberts. “…Once that agreement is signed up with the municipality, they say they can get this collection process up and running within 60 days.”

That means the municipality could potentially craft a memorandum of understanding and have that collection process in place as early as next year.

With similar agreements in jurisdictions around the world and another coming into effect in Ottawa this year, it presents the opportunity to move quickly using those agreements as a template.

“It’s not like we’ll be reinventing the wheel,” Roberts said.

Where that money will ultimately go will be up to county council, but Bednar and Dagg indicated many communities around the world are focusing the remittance revenues toward affordable housing. Roberts said this is where he, too, would like to see the money go.

“My strong inclination would be to direct these funds to affordable housing and attainable housing,” he said.

It was Roberts who tabled the motion to set aside $250,000 in the 2018 budget for affordable housing. While at the FCM conference, the councillors attended a workshop that spoke to using municipal funds as a catalyst for partnerships with upper levels of government. Roberts said hypothetically the potential $250,000 remittance payment from AirBnB could be added to the $250,000 that has already been set aside to do just that.

“If we could leverage that with senior governments I think we could be looking at an annual affordable housing catalyst fund in the range of $1.5 million,” he said. “That’s my optimistic take on that based on not only these meetings with AirBnB, but on the workshops we attended that dealt with affordable housing.”

The councillors also addressed some other issues during the conversations. They brought forward concern about situations where AirBnB rentals could become “party houses” or other sources of disturbance for neighbours. They were told repeat offenders who take no action to correct the issues risk being prohibited from using the service.

“If these are disturbances and they’re unsafe and they repeat themselves and there’s no remedial action taken by the owner or host, not only would they likely be violating municipal standards, but they would be violating AirBnB standards and they would be removed from their platform,” Roberts said. “That was good to hear.”

There were also some differences of opinion. The AirBnB officials argued against zoning and other land use policies that would restrict the company and its hosts. Roberts said he wasn’t convinced.

“We have to wait to see what happens with our short-term accommodation consultation with the public, but my personal opinion is I don’t think we should take zoning off the table,” he said. “No one wants to see Wellington turn into a ghost town in February.”

Overall, Roberts the meetings make a positive outcome more likely. While AirBnB isn’t the only short-term accommodation platform, he said going through this process with the company may be the best way for the municipality to gain some experience in dealing with similar entities in the future.

“The proof will be in the pudding at the end of the day,” he said.