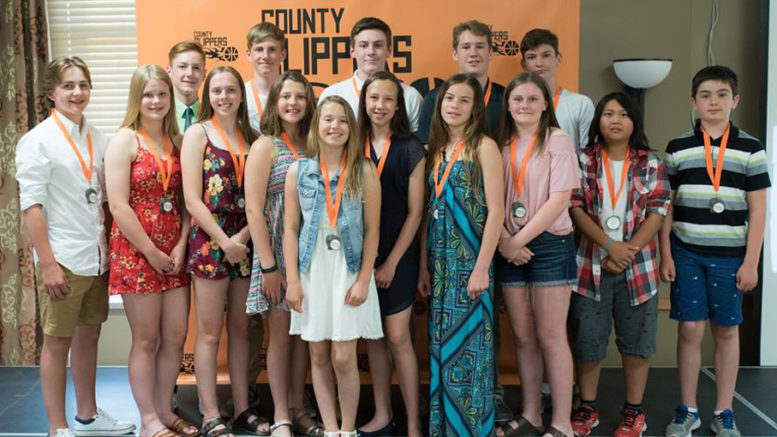 Last Wednesday’s County Clippers rep banquet showed the progress the grassroots basketball organization has made over the past nine years alongside its current successes.

The evening at the Highline Hall started with a subtle change that speaks volumes for the direction of the organization. Alumni Wyatt Gilbert and Myla deBoef, now communications reps on the Clippers board served as emcees. Clearly, the program is developing leaders from within.

They were also the ones who had the honour of announcing a special transition that shows how far the organization has grown from its genesis as a simple idea tossed around by two local teachers. On that night, the Clippers honoured their founders, Rob Garden and Steve O’Brien, by renaming its coach-of-the-year and volunteer-of-the-year awards respectively in their honour. “For those who know Coach Garden and Coach O’Brien, they are two guys who are large and in charge. Almost a decade ago, the two of them had a vision where kids in the county could play basketball in their own league and in their own communities,” Gilbert said.

“Everything we’re here to celebrate is due to one crazy idea and a ton of effort put in by our two founders,” deBoef added.

That celebration, for the record, is for a program that had six rep teams that played a combined 150 games and 18 tournaments — three tournaments they hosted themselves. Gilbert noted all the teams showed improvement over the years and the Under-12 girls actually brought back silver medals from the Ontario Cup this March. Also this year, a record 194 players suited up in house leagues. Many of their coaches were PECI students who themselves have participated with the Clippers.

Garden said there have been a lot of great stories and acknowledged “this is a magical thing we created.” He spoke about the importance of creating a sense of family among the organization’s participants and said numerous coaches, players, volunteers, and families have helped. A number of local companies have also offered sponsorship. Their efforts have allowed the Clippers to offer the lowest cost basketball program from Ottawa to Toronto, yet the program’s quality is high.

Garden and O’Brien were likely more moved by the on-court achievement than the tribute.

“I know I speak on behalf of Steve and myself and say we’re truly humbled,” Garden said. “This was our dream nine years ago and standing here and seeing all of you, we’re so pleased to be here.”

With volunteers the lifeblood of the organization, Garden said there were 10 nominees for the Steve O’Brien Award this year, up from four last year. Fittingly, the award went to its namesake.

Garden read from the nomination received on O’Brien’s behalf. “We cannot overlook those who have given the organization the most. They cannot be taken for granted. Year-in, year-out, this individual has worked to ensure 150-200 kids have enjoyed their Clippers experience,” he read. “He’s on a rep roster as a coach because he’s the glue guy and he fills in when needed. He mentors, he’s the voice of reason when things are difficult around the board table. He steps up consistently and competently.”

Garden noted O’Brien and his son are leading house league programs together and that the Sophiasburgh teacher can be counted on to maintain the original values and vision, serving as the Clippers’ conscience in many positive ways.

“This is long overdue,” Garden said.

There was also a strong pool of candidates for the coaching award this year. Oddly, its recipient isn’t actually listed as a team’s coach yet he attended all the games and almost all of the practices for the Under-16 boys team.

Garden read from a nomination that Bryan Davies has given hundreds of hours as a coach, mentor and advisor. He is also the only Level 3 coach the Clippers have and he’s used his connections in the basketball world to offer benefit to all of the program’s players. One such example is bringing analyst Jack Armstrong to the community for clinics.

Davies’ nominator also stressed his positive messaging and his ability to connect to players or to find a different approach when players and their coaches aren’t on the same page.

“Perhaps his greatest asset is when a player comes off and his mad at him or herself, he takes that person aside and works one-on-one. There are smiles and a teachable moment happens.”

The nominator also noted that Davies is keenly aware of bigger-picture issues like screen time for children or the value of sports in teaching life skills. Davies credited the organization for allowing him to make some terrific friends over the past three years and reminded players and families of the hours executives dedicate to the program. “It doesn’t happen out of the sky, it happens because people care about it,” he said.

Deep down, however, Davies said he coaches because of the people on the court.

“It is the players that really bind you to a team and to an organization. They are some of the nicest young guys I’ve ever met in my life. It’s a credit to their families and a credit to them,” he said. “They will drive you insane sometimes, these guys, but at their hearts and souls, they’re terrific people. It’s the guys and girls you do it for. We have so many moments that make it special. The winning or losing becomes secondary to seeing people get better.”

After each of the six teams gave recaps of their season and the special awards were presented, Garden welcomed PECI Panthers alum Taylor Reddick to offer words of inspiration to the players.

This past season, Reddick finished a four-year career at St. Lawrence College as a co-most valuable player of his team and a second team Ontario college all-star. The president reminded young players that the Wellington native sacrificed a lot playing rep in Kingston for two-to-three years and sitting on the bench and being a role player in his earlier years of college basketball.

Reddick said when he was growing up, programs like the Clippers didn’t exist. Prince Edward County was known as a hockey town and basketball didn’t have much of a profile. Life changed for him when he attended a basketball camp run by Milford’s Matt Ross, a two-time Canadian champion with the Carleton Ravens, when he was in Grade 7. He started to think basketball would be for him. It has been an exceptional ride ever since — including fulfilling a dream to play at the next level.

“I have made a lot of friends over the past four years. Some of the stories are appropriate for tonight, others not at all. My favourite part was the games I was lucky enough to start across the province,” he said.

Reddick said the announcer would introduce him from Wellington and coaches, players, officials, and fans had no idea where the small town was. “I always got a kick out of that,” he said. “I’m doing it, I’m playing at the next level like I always wanted. Over the years, I got introduced from Wellington and got laughter at and those are probably my most enjoyable moments. You don’t realize it until it’s all done. The moral of me telling that is you don’t need to be from Toronto, from Brampton, or from the U.S. to excel in the sport.”

Reddick said he finds it awesome to see how County Clippers has grown and he’s excited to do his own part to teach young children as a coach again, just as he did during camps in the Clippers’ early days.

“It doesn’t matter the town you’re from, if you want to do something that bad, the tools are there for you,” he said. “It’s awesome to see. No doubt it’s going to keep growing and getting better. Don’t feel bad when the announcer announces you from Wellington…Bloomfield…Cherry Valley…Picton… Eventually everyone is going to know here these small towns in Prince Edward County are. Just keep grinding and working hard.”

During the banquet, coaches, managers, and players from each of the six teams shared recaps on their year — with some players even attending via phone from a school trip in Montreal. Each team also gave out individual awards for some exceptional contributors.

The winners are as follows…