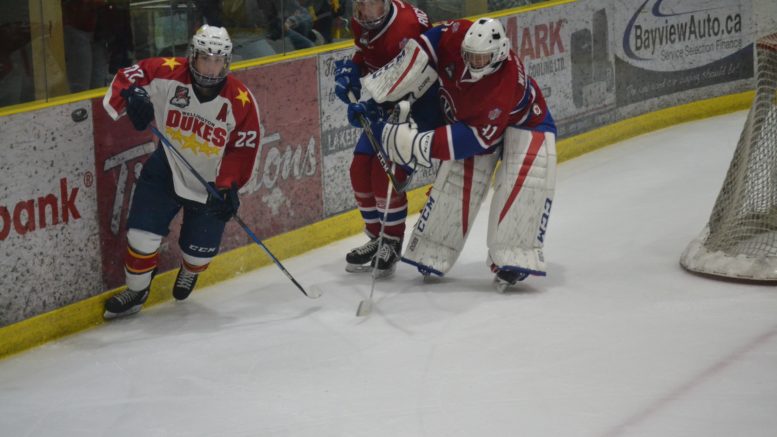 HOSTILITIES IN THE SOUTHEAST- Wellington and Kingston will play each other six times in the 2018-19 regular season thanks to a realignment effort made by the Ontario Junior Hockey League at the loop's Annual General Meeting this weekend. (Jason Parks/ Gazette Staff)

For the Ontario Junior Hockey League, what is old is new again.

As a result of a motion at the OJHL’s Annual General Meeting in Ajax this weekend, the league will be reverting back to a conference alignment last utilized in the 2011-12 season.

Starting in 2012-13, the OJHL instituted the Northeast and Southwest Conference alignments.

Ironically, the Wellington Dukes played three Northern division clubs in the first three rounds of the 2018 Buckland Cup playoffs in the forms of Pickering, Newmarket and Aurora.

Those aforementioned clubs along with Markham and Stoufville will link up with West division squads Oakville, Burlington, Buffalo, Georgetown, Brampton and Brantford to create the Northwest Conference

The Southeast Conference will include Lindsay and the rest of the East division teams in Wellington, Cobourg, Whitby, Trenton and Kingston along with South division clubs St. Mike’s, Toronto Patriots, Toronto Jr. Canadiens, North York Rangers and the Mississauga Chargers.

This was the OJHL’s formation in terms of conferences in the 2011-12 season prior to a major off season overhaul.

In addition to the realignment, the OJHL also announced division rivals will play one another six times a season instead of four.

The motion also appears to indicate the league has approved a pair of relocations although they haven’t been formally announced by the OJHL.

According to reports, Orangeville is moving to Brampton while Milton will relocate further west to Brantford.

For the Wellington Dukes, the move will result in less travel time and while familiarity between the locals and the Kingstons and the Trentons of the world will breed contempt, shorter bus rides suit General Manager Todd Reid just fine.

“It looks like it’s going to be less travel for our hockey club and it’s always nice for the fans to have more of those opportunities to see local teams,” Reid told the Gazette Monday.

A new playoff format has yet to be hammered out yet although the league is looking at the top four in each division making the post season with a possible wild card scenario where a team may have to play into the playoffs against a ninth seed.

In terms of the level of competition, parity has been the name of the game for a number of years minus a few notables so Reid doesn’t think Wellington will be getting off any easier playing South division opponents versus Northern counterparts.

“It’s all relative and teams have changes from one season to another,” Reid said. “Every team has a good coach and you have to do your homework every night.”

In other Dukes news, a media report indicating the Trenton Golden Hawks and the Wellington Dukes had swung a deal that would see defenceman Mackenzie Warren traded for goaltender Carson Poulin was published Sunday although the potential move has yet to have approval from the OJHL or Hockey Canada and Reid declined to comment.

In other news, the OJHL announced the 2018 Governor’s Showcase event returns to HarborCenter in downtown Buffalo Sept. 24-26. for the fourth straight season.

The event has been held at the home facility of Buffalo’s NHL Sabres and the Junior Sabres of the OJHL and is one of the largest showcases within the CJHL and attracts hundreds of NHL, NCAA, CHL and U Sports scouts.

Hosted in conjunction with the OJHL’s Trenton Golden Hawks and the City of Quinte West, the tournament features Jr. A all-star teams from across Eastern Canada.

OJHL teams have announced the commitments of 124 players to NCAA, U Sports or Ontario Hockey League teams this season.

Marc Mercier of the Cobourg Cougars was chosen to assume the role of Chair.