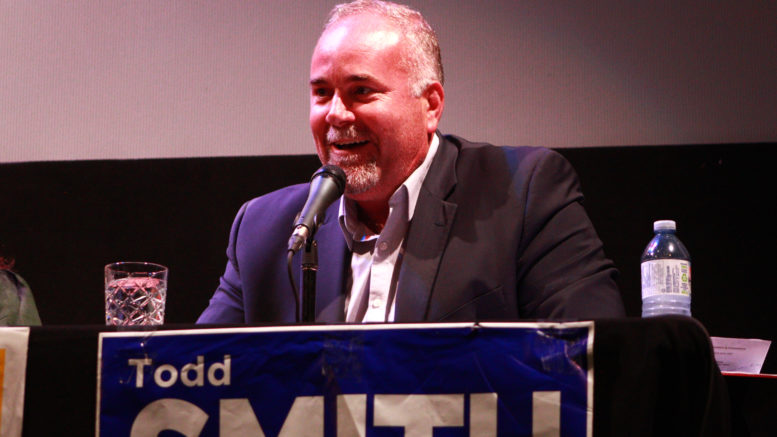 A younger generation of Ontario residents still would have elected Todd Smith in Bay of Quinte, but he’d be sitting on the opposite side of the legislature, according to Student Vote polling results.

When youth in Ontario students went to the polls Wednesday in an effort mirroring Thursday’s election, the Progressive Conservative Smith barely defeated the NDP’s Joanne Belanger by just 25 votes, 755-730, to take the seat — a much tighter race than Smith’s 24,256 to 16,067 margin election night.

The 2,161 students voting within the riding had Liberal candidate Robert Quaiff a distant third with 279 votes and Green candidate Mark Daye just behind him with 222.  Rounding out the polls were Libertarian Cindy Davidson at 85, independent Paul Bordonaro at 56, and Trillium candidate James Engelsman at 34.

It appears the students of Prince Edward County — or at least those attending schools here — would have elected Belanger if given the opportunity.  She garnered 199 votes and won polls at Athol-South Marysburgh, Kente, and Queen Elizabeth Public Schools. That was nine votes more than Smith, who was favoured at PECI and Sophiasburgh Central. Quaiff had the most votes at Massassaga-Rednersville.

Belanger won the poll at Nicholson Catholic College — where she works as chaplain — with 17 of 39 votes.

The provincial tally from Student Vote had the NDP winning 68 ridings and forming a majority government. The Progressive Conservatives would have won 45 seats, the Liberals 10, and the Greens two.

The Student Vote initiative is organized by a non-partisan charity called Civix. It allows students to research election issues, speak with their peers, and families, and make their own decisions. Students also take on the role of polling officials as they are able to advertise, conduct the election, and tally the results to be sent to Civix for the province-wide tally, which was released after polls closed Thursday.

In a press release, Ontario’s chief electoral officer lauded the effort, which was started in 2002.

“Student Vote provides a great opportunity for youth to familiarize themselves with the voting process at an early age,” said Greg Essence. “Through this program, we hope to encourage more 16- and 17-year-olds to add themselves to the Ontario Register of Future Voters.”

More information on the initiative is available at www.studentvote.ca/on2018.