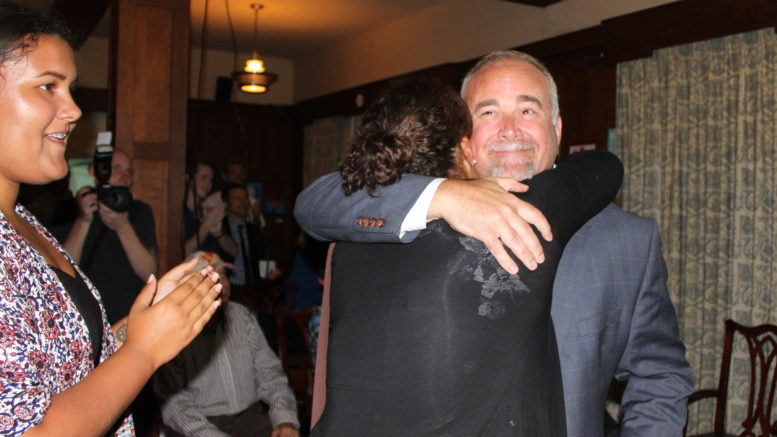 As polls closed Thursday, the Progressive Conservatives jumped out to an early lead and only built on it, ending the 15-year leadership reign of the Liberals. Former premier Kathleen Wynne announced she would step aside as leader of the Ontario Liberals while PC leader Doug Ford becomes Ontario’s new premier designate.

Victories both provincially and in the riding were landslides, but Smith acknowledged to a crowd of his supporters at the Belleville Club that there had been nervous moments throughout the campaign and even on election night. After they knocked on more than 18,000 in the run-up to the June 7 vote, Smith thanked all who’d worked for his campaign.

“We had the best team in Bay of Quinte, no question,” Smith told cheering supporters.

First elected in 2011 to represent Prince Edward-Hastings, Smith said the feeling at the time was the Progressive Conservatives were going to form government. When he was re-elected in 2014, that same feeling returned. Both times the Tories were stymied.

“Tonight, we’re going to form government,” he told the raucous crowd. “…We have a lot to celebrate, but we have a lot of work to do.”

He said the party will now work to unwind 15 years of Liberal-led legislation to get the province back on track. He said the PCs have the team do it.

In an interview with the press following his speech, Smith said he was ecstatic to see the party win enough seats to form a majority government.

“Now we can start to do the work that’s necessary to turn Ontario around,” he said. “I’m so excited to be on the government side of the bench. For the last seven years, I’ve had to sit on the opposite side as bad decision after bad decision was made — not all of the decisions were bad, but there were certainly a lot of bad decisions.”

He said he’s looking forward to no longer being a critic and hopes to play a major role in government. For the first time as MPP, Smith will be on the receiving end of some of the same criticism he has dished out. He said he’s ready to face it.

As the campaign began, Smith said, the PCs were poised to once again clash with the Liberals. When an orange surge seemed like it could become a real possibility, he said strategies changed.

“It was really important to shine a light on what the NDP is all about and remind people about their track record in Ontario and some of the candidates they were running,” he said.

He acknowledged it wasn’t a perfect campaign for the party and was “a rollercoaster ride” to the end.

Over the next four years, Smith said he hopes to be a major part of Ford’s team and hopes to make sure good things happen in the Bay of Quinte riding.

During his run as Prince Edward-Hastings MPP, Smith proposed several private member’s bills that didn’t receive support from the governing Liberals, including the Raise A Glass to Ontario Act which would have cut red tape for the beverage alcohol sector across the province. Asked whether he intended to revisit any of these proposals now that his party has formed government, Smith said it will depend on his role.

“Now that I’ll have a friendly finance minister and have a friendly health minister, a friendly cabinet partnership, we’ll be able to accomplish all kinds of good things,” he said. “I’m so excited about this, this is what I dreamt of in 2011 and finally it’s going to happen here in 2018.”

Longtime Progressive Conservative supporter Craig Samples said it was time for a change.

“I don’t think Ontario can afford any more of the scandals and financial wrongdoings, inappropriate elementary school curriculum — the last 15 years since the Liberals have been in it’s just been one scandal after another,” he said. “I vote more on the party policies and we can’t afford to keep on accumulating the debt we have under the Liberals.”

Samples said he liked the tax cuts proposed by Ford and felt the move would create jobs and, overall, the province would be more business-friendly under the PCs. From a finance perspective, he couldn’t see how the rival NDPs could have accounted for their promises.

Asked how he felt about the Progressive Conservatives’ announcement they would run deficits for the first two years of their mandate, Samples said there has to be time to return to balance.

“You’re going to have to endure some short-term pain if you’re cutting taxes, but I think in the long run it will drive job creation,” he said.