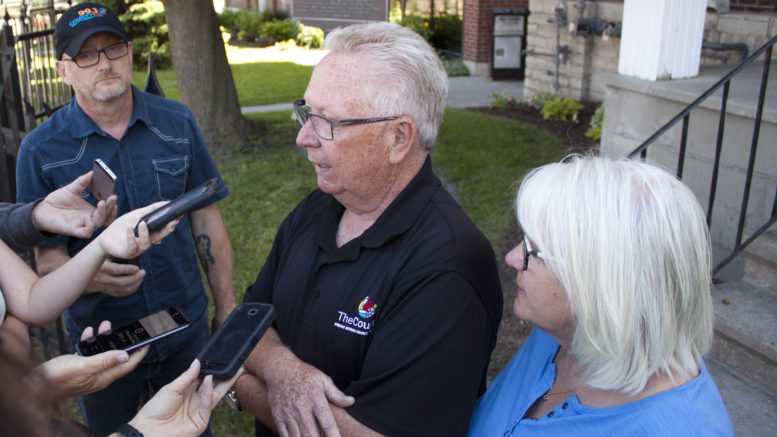 Quaiff, with wife Susan at his side, met with local media outside Shire Hall on Monday morning to make the announcement. After a tough provincial run that saw the Liberal candidate earn 7,512 ballots — about 14.9 per cent of the vote — across the Bay of Quinte riding, Quaiff said he took the weekend to contemplate his future.

“We decided over the weekend that it’s time to take a rest and I’m announcing today that I’m not seeking re-election in the upcoming run for mayor,” he said. “I’ll step back and I’ll let those interested individuals come forward.”

He’ll now return to the Shire Hall horseshoe to finish the remaining six months of his tenure as mayor and said he’ll continue to fulfill his duties and hold his head high. After that, he said he’ll look forward to spending more time with his grandchildren and wife of 41 years.

“It’s time that I enjoyed my seven grandbabies and my wife,” Quaiff said, getting choked up. “She’s the one who has stood by me through this whole thing, she’s the one that gave me encouragement, she’s the one that was always by my side and encouraged me to do what I did. I love Prince Edward County — that’s the bottom line for me.”

With the wave of Progressive Conservative support that swept across the province on June 7, Quaiff said the best thing for Prince Edward County is to have a new mayor step in and build a positive relationship with the PC government.

“It was easy for me to talk to the Liberals, I don’t know if the same relationship would be there with the PCs,” he said.

Quaiff congratulated MPP Todd Smith on his re-election and said he felt Smith would continue to represent the riding to the best of his ability.

Reflecting on his time as mayor, Quaiff said there have been many projects for this council to be proud of. He pointed to the reconstruction of Picton Main Street and rehabilitation of County Rd. 3. When the term began, Quaiff said, many developers were exasperated with the municipality’s development process.

“We heard developers were not happy, they didn’t care if they built a home in Prince Edward County,” he said. “Now we have 1,800 new builds in the process.”

A contributing factor in that success is the ubiquitousness of the County’s brand, he said, which has continued to flourish over the last few years.

“During my campaign last month we went to a lot of doors and a lot of residents said ‘we’ve heard a lot about you and your council, you guys have run a good municipal environment over there’ and that made me feel really, really good,” said Quaiff.

He also pointed to County Rd. 49 and the completion of an engineering study that puts the municipality in a good position to utilize funding for the project should it become available in the future.

“A lot of things that I think go unnoticed started to happen and I feel good at the end of the day — this council did a great job,” he said.

However, the last few months have been exhausting. With stints as the councillor for North Marysburgh, chair of the Prince Edward County Police Services Board, mayor, and a representative on the Eastern Ontario Mayors’ Caucus, Eastern Ontario Wardens’ Caucus, Association of Municipalities of Ontario, and coming off a run for MPP — Quaiff he said he’s beginning to wind down after 17 combined years of public service.

Asked whether that meant his political career was over, Quaiff was non-committal.

To this point, only current South Marysburgh councillor Steve Ferguson has put forward his name for the upcoming mayoral race. Quaiff said he wouldn’t endorse any candidate. He did encourage more residents — especially women — to run for municipal office.

“I would like to see more females put their name in to run for council, they bring a really good perspective to the table and good discussion,” he said. “I know there are a lot of good candidates out there and I’d like to see them come out.”

Flanking Quaiff and beaming during the announcement, Susan said she feels great about the decision.

“I think it’s time he took a little rest,” she said. “I have aging parents who live in the community as well and I still work full time, so he’s got lots to do.”