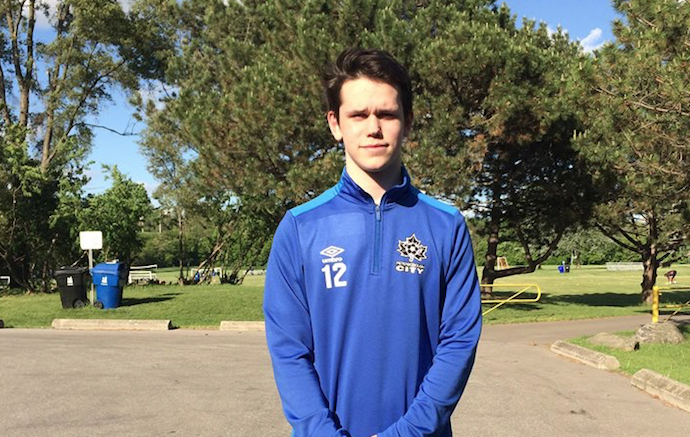 FROM PRINCE EDWARD COUTY TO PETERBOROUGH- Local soccer standout Joey Monroe is playing for the Peterborough City U18 team this season. (Submitted photo)

A Prince Edward County native continues to climb the ladder of competitive soccer.

Joey Monroe is a starter for the Peterborough City U18 entry in the vaunted Central Soccer League, a competitive loop featuring teams from all over the Greater Toronto Area and as far away as Sudbury.

A graduate of the Prince Edward County Soccer Association Eagles program, Monroe played house league in PECSA in 2017 and for the PECI entry in the Bay of Quinte Athletic Conference last fall but sensing their might be more for him on the pitch, the Picton resident attended the Bryst Football Academy late last summer prior to a tryout in Peterborough in the fall.

Monroe was offered a spot to train with the Vaughn-based development outfit but the travel to the GTA three-to-four times a week would have been too much and it was Peterborough City and coach Vic Waselenko who welcomed Monroe with open arms.

The City skipper has been impressed with the Prince Edward County product thus far.

“It’s amazing the level he and his family have shown to our organization this season,” Waselenko told the Gazette.

Monroe’s speed and versatility are among his biggest assets according Waselenko.

“He’s made an impact on the team in terms of scoring and being a quiet leader and he can play anywhere although his greatest strength is at the striker position. He has a great left foot and is probably the fastest kid on the team,” said Waselenko.

The CSL is one of the top youth loops in the province and Monroe has managed to adjust despite not having played competitive club soccer since 2016.

“It’s definitely a higher level of soccer than I’ve played before and you need to be prepared every night but I think I fit in pretty well so far,” Monroe told the Gazette recently.

The 6’1” 170 lbs athletic standout has tallied one goal through four games for PC and said there has been some self-adjustments in his play since joining the club.

“I feel like the chemistry is coming along and I’m learning and understanding how to become a better team player,” Monroe added. “A lot of my teammates are all-stars and they definitely have my back in terms of showing me things and teaching me.”

If there has been a transition in terms of greater team structure in regards to Monroe’s play, Waselenko hasn’t noticed it.

“His transition and addition was pretty seamless. This core has been together for some time and it’s a great group and they are all starting to gel nicely. At the end of the day, teams always want to add talented players and that’s what Joey is,” Waselenko added.

In terms of where he hopes competitive soccer will lead, Monroe is up front about his lofty goals and a spot on a Canadian University team is in his sights.

“I hope to get to the highest level possible for me and be part of a championship winning club,” Monroe said. “I want to be considered as one of the greatest soccer players to come out of Prince Edward County.”

Monroe also wished to thank his sponsors PRZ Paintball and Tim and Jean Williams for their support this season.