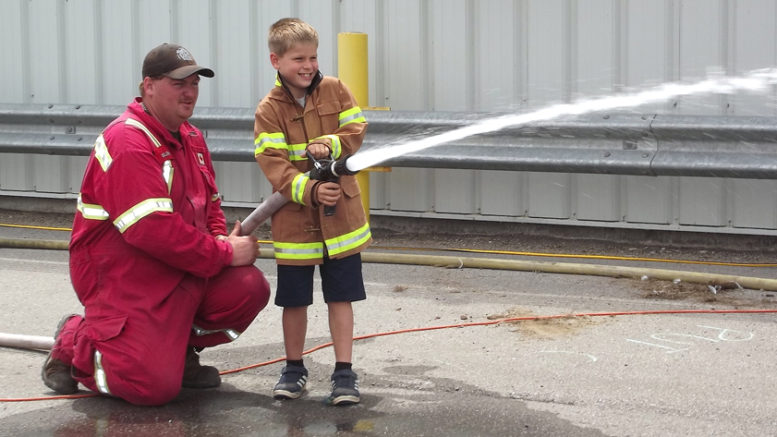 About 60 children take challenge to complete activities on course

The next generation of firefighters got to test their skills during Prince Edward County Junior Firefighter Challenge in Wellington Saturday.

Consecon firefighter Steve McKee, one of the organizers for this event, said it was the first junior firefighter day held in the county, but probably won’t be the last.

“It’s been quite successful,” McKee said. “We’re hoping to do it again next year.”

He said about 15 volunteers from Station 7 in Wellington, Station 6 in Consecon and Station 1 in Picton came to help out during the day and keep things running smoothly.

Boys and girls donned miniature firefighter jackets and then ran a scaled-down version of a firefighting competition course. They had to crawl through a “burning” building (complete with painted wooden flames), hit a target with water sprayed from a fire hose as if putting out a blaze, carry a rescue dummy and haul a coiled fire hose a specific distance. 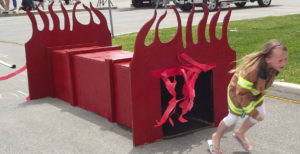 Breaking away – Six-year-old Isabella Nyman of Carrying Place bursts out of a “burning” building and heads to the next obstacle on the course during Saturday’s inaugural challenge. (Terry McNamee/For The Gazette)

At the end of the course, they got to their favourite part: sitting in a small wooden fire truck where they could put on a helmet and turn on a flashing red light. The kids also really liked aiming the fire hose with a little help from a real firefighter. For some of the smallest competitors, the course proved to be a real test of their strength and stamina, but all persevered right to the end.

“We’ve had a pretty good day today,” McKee said. “We’ve had about 60 kids. They get a certificate and a free hot dog and drink when they complete the course.”

The day also included an aerial ladder demonstration by the local firefighters, a chance to interact with Sparky the Fire Dog and a silent auction with items donated by local residents and businesses.

“Any money raised goes back into the community for the food bank, (Canada Day) fireworks and for families in need,” McKee said.

Firefighters from Stations 6 and 7 will be doing the fireworks display at dusk on the beach in Wellington during the town’s Canada Day weekend celebration.