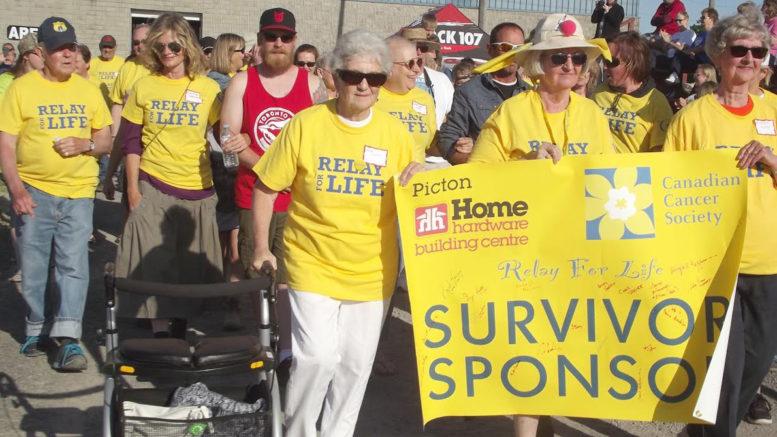 Enduring strength -Cancer survivers in bright yellow shirts kicked off the ninth annual Prince Edward County Relay For Life with their own lap at the Picton Fairgrounds Friday evening. This event is expected to surpass its $40,000 fundraising goal. (Terry McNamee/For The Gazette)

Community rallies once more to support those battling cancer

No one faces cancer alone.

That is the mantra for the Relay For Life, an annual walkathon that brings communities together to raise money to fight cancer.

Hundreds of people, including nearly 20 teams, gathered at Picton’s fairgrounds for the Relay For Life Prince Edward County on Friday, June 8, not just to raise money, but also to celebrate cancer survivors, remember those lost to cancer and encourage those fighting this dreadful disease to keep on battling it. Those who came as part of a team were encouraged to always have at least one team member on the course at a time during the six-hour event to symbolize the ongoing battle against cancer and to show that no one walks alone.

“We each have our own reasons for being here,” said Lola McMurter from the Canadian Cancer Society. “We raise money for all types of cancer.” She said most of the money goes toward cancer research, as well as supporting Wheels of Hope, in which volunteer drivers (whose only payment is compensation for their mileage) drive cancer patients to and from appointments and treatments. 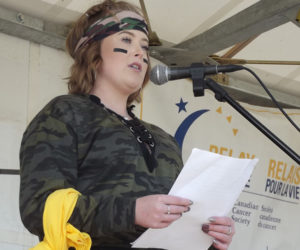 Battle tested – At the start of the ninth annual Prince Edward County Relay For Life held at the Picton Fairgrounds on Friday, , 16-year-old cancer survivor Abigail Heffernan spoke eloquently about her three-year battle with leukemia. She encouraged participants to ask survivors to share stories about overcoming the disease. (Terry McNamee/For The Gazette)

Sterling Johnston of Picton, a cancer volunteer for 22 years, said this is the ninth Relay held in Picton, and that the turnout this year was about the same as last year’s event. The campaign to reach the $40,000 goal for this year’s  Relay had already climbed well over $15,000 the day before the event even took place, and had reached $38,434 by midnight Friday. A final total is not yet available, since some donations are still coming in.

Who is affected by cancer? It can strike at any age, regardless of your overall health and fitness level. This year’s guest speaker, 16-year-old Abigail Heffernan, was diagnosed with leukemia when she was 13 years old. She will finish her treatment in September. She said getting the diagnosis was overwhelming, but family and friends rallied around her to help her in the fight of her life.

“This was something bigger than all of us,” Heffernan said. The PECI student, who spoke eloquently about her determination to survive, said facing cancer has changed her.

“I’m not the same person I was, and never will be,” she said. “I’ve learned to search for the positive in every situation. Every single thing happens for a reason, and life has to be taken day by day. It’s the difficult days that teach us what’s important.”

She stressed that people need to know that cancer can be beaten, and that people should not be afraid to ask survivors about their journey.

“We are not afraid to talk about our stories,” she said.

Cancer survivors wore bright yellow shirts during the relay, and the sea of yellow was proof positive that this disease can be conquered, thanks in large part to breakthroughs made in early diagnosis and treatment. Since the first Relay For Life was held in 1999, relay events held across Canada have raised more than $500 million, money that funds cancer research and helps support the needs of people with cancer and their caregivers.

If you didn’t pledge a donation for a team or individual at this year’s Relay, you can still help by making a general donation. For more information, contact Lola McMurter by phone at 613-962-0686 or e-mail her at lola.mcmurter@ontario.cancer.ca.