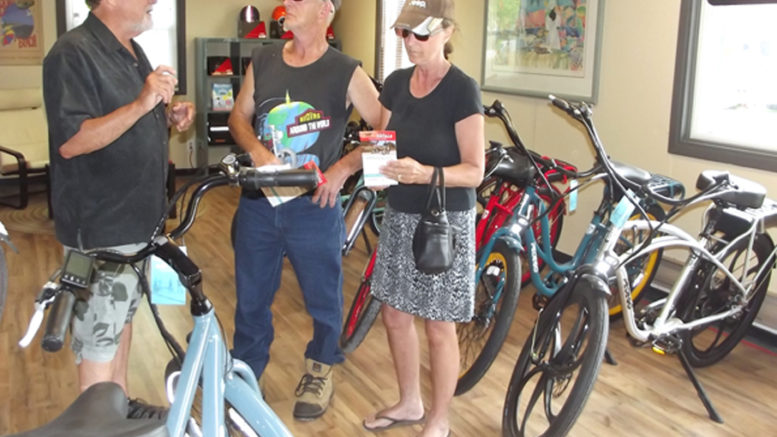 Franchisees welcomed by businesses and neighbours in village

Want to cruise around the county by bicycle, but you get too tired to pedal longer distances? ‘

The solution can be found at a newly-opened business in Bloomfield — an electric bicycle! Pedego Electric Bikes held its grand opening at its location at 39 Stanley St. in Bloomfield on Saturday, June 9, and owners Patrick and Gillian Maloney were delighted by the steady stream of customers coming in to check out the bikes.

Patrick said they did a test run for three months last summer to see if there was interest.

“We opened last year with a pop-up store,” he said. “The response was tremendous, so we managed to find this place.”

The permanent store is located right across the street from the Millennium Trail, which is popular with cyclists, and it has an excellent inventory of sizes, styles and colours. They even stock tricycles and tandems (bicycles built for two), along with commuter bikes, entry level bikes, mountain bikes and folding bikes. All are made by Pedego and all can be used like regular pedal bicycles or as electric bikes. Overall, there are 16 different styles available, along with accessories such as saddlebags and baskets.

“These are proper bicycles,” he said. “If the battery’s dead, you can still pedal it like a regular bicycle. Most of them are seven-speed,. The folding bike and tandem bike are three-speed.”

Each bike comes with a rechargeable battery, and buyers have a choice of battery strength. He said these modern batteries are small but powerful, and much more efficient than batteries produced in the past, with very little charge loss when not being used. Patrick said he and Gillian have been made welcome by people and businesses in the community.

“The support from the County was really exceptional,” he said.

He said the shop will be offering winter storage for customers’ Pedegos as well, and even offers rentals for those who are not ready to buy. “At the end of the season, we will turn over our rental bikes,” Gillian said. “They will have a one-year warranty.” She said the former rentals offered for sale will all be checked over and made shipshape before being offered for sale.

Prices on new Pedego bikes range from about $2,600 to just under $7,000, depending on the size, style, battery strength and accessories included, such as lights. “A big part of the price of them (the bikes) is the batteries,” Patrick explained, adding that all the new bikes come with a full two-year warranty.