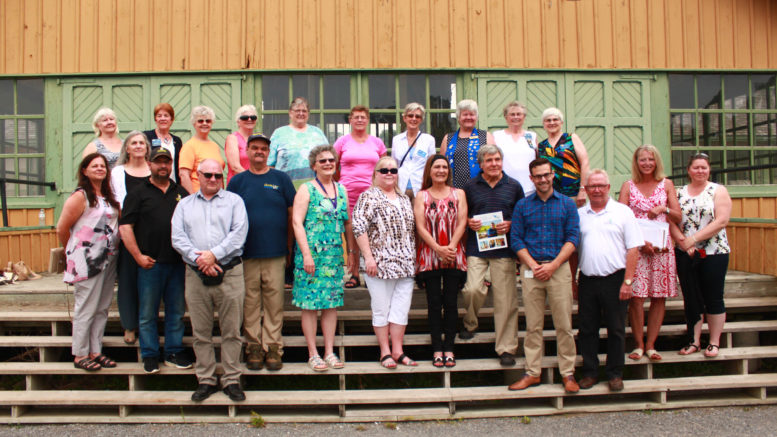 Representatives from the municipality, local transit service providers, the County Foundation, the Vital Signs Getting Around working group, and the Prince Edward District Women's Institute celebrate the announcement of $500,000 over the next five years to support public transit. (Chad Ibbotson/Gazette staff)

The County officially announced a provincial grant of $500,000 over the next five years that will be used to implement the new public transit plan and business case that was recently approved by council.

County officials, staff, transit partners, as well as representatives of the Prince Edward District Women’s Institute and the County Foundation gathered outside the Crystal Palace to celebrate the announcement Monday.

Mayor Robert Quaiff said it was just a few weeks ago that council approved the transit plan and business case.

“We’re excited to have this plan in place and to get to work on expanding public transit service to all residents in Prince Edward County,” he said. “A plan as comprehensive and detailed as this one doesn’t come together out of thin air: plenty of thought, discussion, and expertise helped inform this plan and business case.”

He said the plan was also strengthened by public feedback.

“I can certainly say that council was impressed by the final plan that came before us for approval,” he said.

The funding, first announced by the Ministry of Transportation in May as part of its $30 million Community Transportation Grant Program, will support the new integration and expansion of local transit services.

“We are grateful to receive $500,000 from the Community Transportation Grand Program municipal stream funding over the next five years,” said Quaiff. “This funding will go a long way toward helping us build on our public transportation service incrementally and provide a sustainable and cost-effective service in line with other rural communities.”

The municipality, the County Foundation with support from the Vital Signs Getting Around working group, and local transit service providers developed the five-year plan. The plan has several guiding principles including that it must provide mobility options to all residents, including options to make local trips. It should improve connections to seasonal employment opportunities to bolster the growing tourism industry, make use of existing transportation resources, and seek partnerships with key stakeholders to improve the service. The plan also says the service must be sustainable and cost-effective. Another guiding principle is the need to build on the service incrementally and to monitor response in demand before growing further.

“The municipality is committed to working together with existing transportation providers including the taxicab companies, Deseronto Transit, Quinte Access, Belleville Transit, and others,” said Quaiff. “Together we can build an enhanced transportation system that ensures the health and long-term well-being of our community and our local economy.”

Deseronto Transit administrator Susan Stolarchuk said the service, and the Town of Deseronto, are ready to do their part.

“On behalf of the Town of Deseronto, our mayor, and our council, we are very pleased to be a part of this transportation plan and this initiative,” she said. “We believe that if we work together across municipalities, share resources, share costs, it can benefit our communities.”

The Women’s Institute (WI) was recognized for their leadership in the establishment of the municipality’s first transit service, a specialized transit service offered through Quinte Access.

Director of community development and strategic initiatives Neil Carbone said any discussion around public transit in Prince Edward County has to start with WI.

“Without the efforts of the WI to bring specialized transit to the county and continue to support that service through annual donations, the current transit plan and business case would have looked very different,” Carbone said “Because of the WI’s efforts, we were in a position to build upon the existing services offered by Quinte Access, and this means a higher degree of cost recovery than most rural transit services.”

In many ways, he said, the next steps in the implementation of the public transit plan and business case are an extension of the work WI has been doing since 2005.