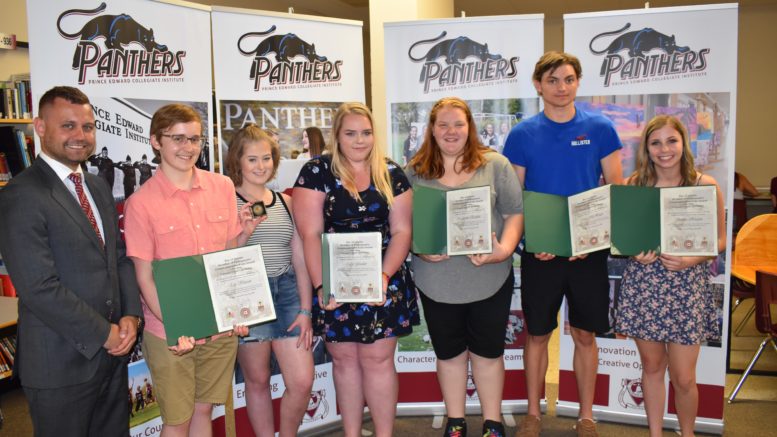 One doesn’t need to attend or frequent PECI often to feel the community spirit that permeates the facility’s walls and flows into Prince Edward County.

It might help in order to put some faces and personalities to the names of the leaders of tomorrow but the fact remains PECI is a very special place in the entire crux of our island and some of its most special students were recognized on Friday afternoon through a national awards program in honour of Canada’s 150th anniversary.

Ben Howe, executive assistant to Bay of Quinte MP Neil Ellis explained that when the Canada 150 medals were handed out to members of the community in late fall 2017, there were very few youth nominees and no youth award winners.

“So Neil decided to reach out to the local secondary schools in the riding and call for a nomination from staff for students that go above and beyond in their school community and the community outside the school,” Howe explained.

Principal of PECI Darren McFarlane said told the Gazette that he was proud of all of the Panthers but was especially satisfied to see the half-dozen students be honoured through the prestigious Canada 150 program.

“We are very proud of these Panthers in particular that were individually nominated by staff and go over and above to engage members of the school community while raising profile of our school,” McFarlane said. “It’s fantastic to see our youth being recognized at an appropriate level because we have students that go way over and above each and every day.”

Students were recognized for their efforts in the community to raise awareness for various causes, for starting recycling programs inside the school, for perseverance, volunteerism and coaching fellow youth.

“They really serve as an inspiration and their works demonstrate school and community pride. These efforts are a result of the global competences and social attributes we seek to instil in each and everyone of our students on a daily basis and it’s so awesome to see these particular students take these skills and utilize them outside of regular learning tasks,” McFarlane added. “When you see these characteristics take root and grow outside of the school, that’s when you see there is a difference being made here each and every day.”

Below are the award winners and a statement from their nomination forms submitted by various PECI staff members.

•Abby Heffernan: Abby selflessly puts others ahead of herself and leads by example. She wrote a speech about her experiences living with cancer as a young teenager and bravely spoke to our entire school community of over 700 staff and students at the Give Where You Live OPP assembly that raises awareness, support and funds for children living with cancer in the Hastings-Prince Edward area.

•Eric Klassen: Eric has tirelessly led the school recycling program every week for the past 2 years while maintaining Ontario scholar status. Eric has been critical for the program’s success and his commitment to the health of our environment is commendable.

•Katherine Reddick: Katherine is an ambassador to our school and strong volunteer in our community.She has supported students by mentoring them and showing them resources to access in our community like the Recreation Outreach Centre (ROC).

•Brooke Hudgin: Brooke is an excellent role model for other students.  She is genuinely kind, compassionate and goes out of her way to help and support students with special needs.

•John McHugh: John has gone above and beyond in mentoring young student-athletes for the past five years. As a volunteer coach, John has been instrumental as a role model for both youth basketball and baseball.

In a statement to the Gazette, Ellis trumpeted the efforts of the students.

“The receipt of a Canada 150 Commemorative Coin intends to mark out those in our community who have aimed to positively shape, and impact, the Bay of Quinte region,” Ellis said. “Each of the students who are recipients are truly impressive leaders—they have achieved so much already and have set out a strong foundation—of action and consideration for others—that will serve them well in the years to come.”