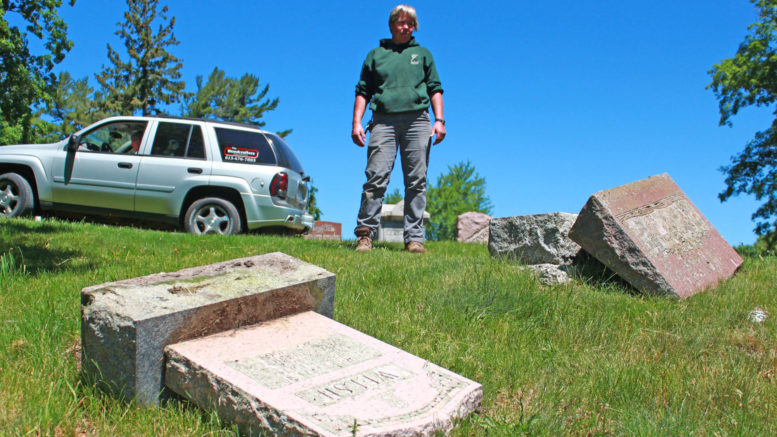 Glenwood Cemetery and local police are asking for the public’s assistance in identifying vandals who have systematically toppled headstones and monuments at the site, causing damage estimated in the thousands.

Glenwood Cemetery board chair Sandra Latchford said the vandals have smashed benches and knocked over headstones.

Latchford explained that cemetery staff and board members began to notice some little things over the last couple of weeks.

Cemeterian and grounds manager Helma Oonk said it wasn’t obvious at first. A few things seemed to be sliding or a little out of place. It came to a head overnight Wednesday. When she arrived on the grounds Thursday morning, she found a bench smashed to pieces. The more they explored, the more damage they found — much of it centralized near the back of the property in sections “H” and “F”. While early counts were lower, Oonk estimated that close to 200 headstones and monuments had been vandalized as of Thursday afternoon.

Near the back of the property, they also found a large 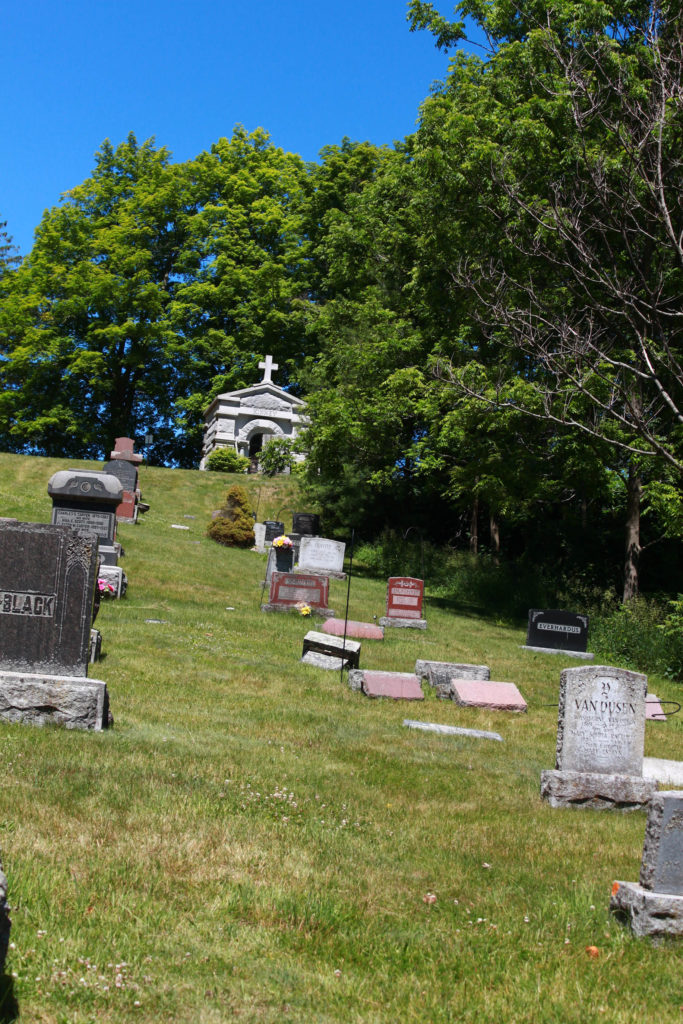 A number of headstones were knocked over near the Kinney Mausoleum. (Chad Ibbotson/Gazette staff)

amount of fast food wrappers and other garbage.

“We’re hoping, once this goes public, that some people may have seen things and didn’t realize the significance of what they’d seen,” she said. “…They may have seen some people walking, going into the cemetery and didn’t think anything of it — certainly we need the public’s help.”

Prince Edward OPP are involved and are working with Glenwood’s board and staff. Latchford said it’s a stressful time for the board and for families with loved ones at the site.

“It’s senseless, they’re attacking monuments and stones and markers of people’s parents, grandparents — what’s the sense in just knocking them over,” she said. “It’s just terrible and it’s going to be very costly for us to repair.”

Glenwood is attempting to notify families who are affected, although that can be very difficult for older markers.

By law the cemetery has to make sure that any monuments or stones are in a safe position for the public. Latchford says that means damage to the stones will be assessed and, if they can’t stand safely, they’ll have to lay flat. The cemetery will work with families who would like to make repairs to damaged markers.

“We have to go out now and we’ll have to inspect them, we’ll have to look them all over and either put them down or get them up one way or another,” she said. “We have no idea yet what that will cost, but it’s not going to be cheap.”

Moving forward, Latchford is hoping that publicity through social and traditional media will help identify the culprits.

“We’re hoping that if they saw something or heard something and didn’t realize the significance of it, that they will then report it to the police,” she said. “We also need people to listen and report anything they’ve heard through the grapevine in the community.”

The vandals need to be told clearly that their actions are unacceptable, Latchford said. If they’re attacking Glenwood, they’re very likely to cause damage to other places as well. She suggested now that the cemetery is more alert, it could be another site receiving the brunt.

“It’s a community issue,” she said. “… As a community, we need to be really, really vigilant and watchful and report information.”

Locals looking to help offset the cost of the damage can donate directly to the cemetery, just be sure to identify the funds as being for the repairs.