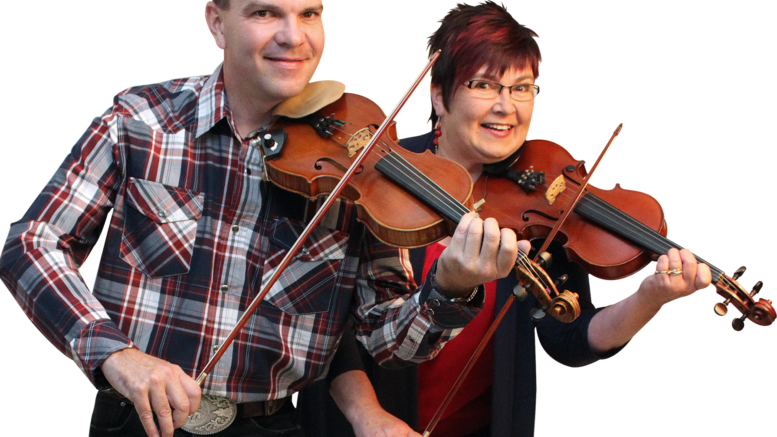 Fiddling up a storm - Scott Woods and Kendra Norris will perform a family-friendly fundraiser at Picton United Church this Saturday. (Submitted photo)

This year’s Fiddling Up A Storm performance will have a little bit of familiarity that audiences might remember from his 2017 show, Twin Fiddle Express, but the performer says a conscientious effort has been made to freshen it up.

“We always do a new show with entirely new music, jokes and themes,” he said, adding his trick fiddling, including playing behind his back and flipping, remains an act that he just hasn’t been able to cease.

“It’s one carry over from show to show. Years ago, I said ‘Everybody’s seen that. We don’t have to do tricks any more,’ but audience members expected it. I was told they came looking for the somersault. We do keep that in, but spice it up every year to look different.”

The tour started in April, right around the time of a rare ice storm. Crowds were sparse the first few nights before the tour took off on its way to the British Columbia exterior and back to Ontario, with shows almost every night.

While Woods says tongue-in-cheek he didn’t expect his theme to be so closely tied to an actual weather event, the music reflects weathering the storms of life.

His sister, Kendra Norris, a fiddle, accordion and piano player will perform “Keep on the Sunny Side of Things” and drummer Bill Carruthers leads vocals on the Ian Tyson classic “Four Strong Winds.” The selections are part of an eclectic mix that includes old-time fiddle music, western swing, and country Gospel.

Carruthers is one musician Woods says features more prominently in this year’s show. He also performs the classic Neville Wells song “Please Don’t Mention Her Name,” which he said really pulls on the heart strings. The contrast of a light comedic show and the heaviness of that song creates an emotional roller coaster.

“It’s one of my favourite songs in the whole show,” he said.

Seasoned guitarist and vocalist Steve Piticco could also be a draw for local musicians who might remember him performing at the Prince Edward County Country Jamboree and other shows in the area. Woods said he’s a great musician who is able to offer a range of different elements in one song.

“He sounds like four guitar players over there,” he said. “He’s a great entertainer.”

While his veteran cast also includes 11 other accomplished musicians and dancers, Woods said a 13-year-old step dancer and fiddle player has stolen the show on several occasions. Stratford, Ont. Native Leo Stock is a rising star who has figured out how to get audiences attention.

“He comes out four or five times a show and kicks up his heels. The crowd eats him up. He’s a great dancer. He has charisma that is obvious,” Woods said. “He also adds a bit of levity. There’s a schtick he does during other people’s songs that adds a lot of fun to the show.”

Woods has been doing fundraising concerts for churches since 2004. In 2003, he was serving as band leader in Memories of Don Messer’s Jubilee when he got word that his father — also a fiddler — had died. While he was home in Southern Ontario paying his respects, he had a chance to talk about music with his mom. They had to make a decision about what to do with a series of performances his dad had booked for their band.

“We knew he’d want us to get back on the road and carry on,” the multiple-time winner of the Canadian Open Fiddling Contest and Canadian Grand Masters Fiddling Championships recalled.

Around the time, members of Woods’ own church were going to go on a mission trip and he thought he’d like to go. She suggested it might be meaningful to play a show for them to raise money for that trip. He did a series of fundraisers across Ontario in 2004 and never looked back. Now, he does hundreds a year.

“We have played so many churches,” he said. “We promote by word of mouth and agree to a split at the door. They can work hard, fill the place, and have great fundraising for a roof, a mission, choir gowns, or a new boiler.”

Tickets for the family-friendly show are $25 available at the Picton United Church. Children’s tickets are $10. The doors open at 6:30 p.m. for a 7 p.m. show.