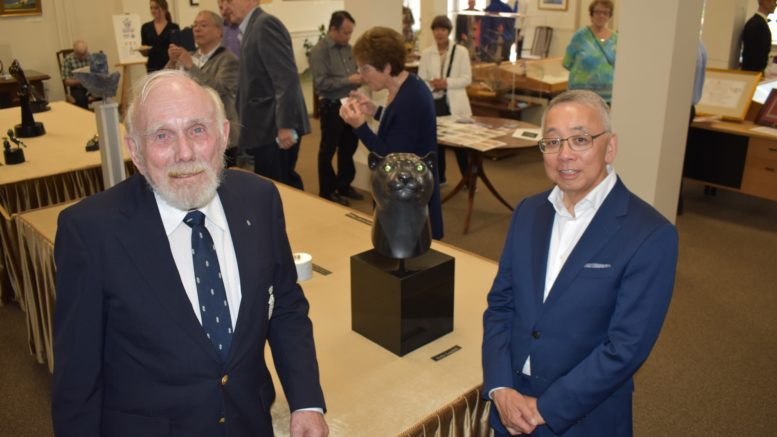 “Spirit of the Wild” is an exhibition of the fine sculpture work of Takashi Sakamoto, a Prince Edward County resident since 1991.

The pieces on display are sculpted from granite, marble, bronze, sodalite and rocks and metals and feature ornate inlays and designs utilizing precious metals and gems.

The exhibition features 13 of Sakamoto’s pieces which range from the nude human form to the mechanized world to his first love, nature.

Sakamoto told the Gazette he’s been sculpting since the age of 12.

Living in Texas at the time due to his father’s employment, Sakamoto discovered nature and wild animals when his friend took him on a typical southern United States rite of passage- a hunting trip.

“I was amazed by all these creatures and I realized I wanted these animals for myself but I couldn’t catch them,” Sakamoto said.

So he started carving them in wood.

A rabbit and the head of a wild boar were presented to the friend that took him on his first hunting trip.

Sakamoto would come to Canada in 1972 and attended the Ontario College of Art in 1973, learning the skills of casting, metal work and jewelry work.

A native of Tokyo, Sakamoto travelled the world upon graduating OCA and had his early work exhibited in Toronto, Los Angeles, New York City and San Francisco.

In 1990, Sakamoto was commissioned by the Royal Ontario Museum for the creation of the new European Gallery.

For his part, Sakamoto has stayed relatively quiet since moving to Prince Edward County after his ROM commission and has not participated in any large scale art exhibitions or shows, mainly focusing on his commercial and architectural work while creating his glorious pieces in his down time.

“I wanted the opportunity to create without anyone bothering me,” Sakamoto said with a laugh.

Sometime around 2014, Sakamoto was connected with the Victory and the possibility of a Prince Edward County-based exhibition started to ruminate.

Sakamoto was grateful to Victory executive director Paul Adamthwaite and executive secretary Betty Anne Anderson for their efforts in organizing and promoting the exhibition which saw well over 40 people attend Saturday’s opening.

“Unlike the other galleries that are geared to sell and make profit, this gallery is mostly about education and educating the public,” Sakamoto said. “I feel art is very important, especially to young people. I think the beauty of art is very powerful. It’s a spiritual food that everyone should taste and if you embrace the beauty that’s within art, there’s no room for crime, there’s no room for bad thoughts because you are focused on beauty.”

Adamthwaite told the Gazette he was thrilled to be able to bring this calibre of artist to The Victory and the exhibition falls within the dual mandate the organization drafted back at its genesis in 1998.

Formerly known as the Collection and Archives Society, the organization seeks to preserve and conserve paper originals of documents, paintings and books and offer avenues for education and research.

“There’s really no point in preserving knowledge unless you are going to use that knowledge and pass it on,” Adamthwaite said.

The Director added the Victory was “Proud and honoured” to host “Spirit of the Wild” and noted the wide selection of members of the public that attended the vernissage.

“We see our old friends but we’ve got the younger generation represented here and the young people really make the day,” Adamthwaite said. “They are paramount to our cause.”

Spirit of the Wild runs everyday at The Victory, 205 Main Street until July 15.