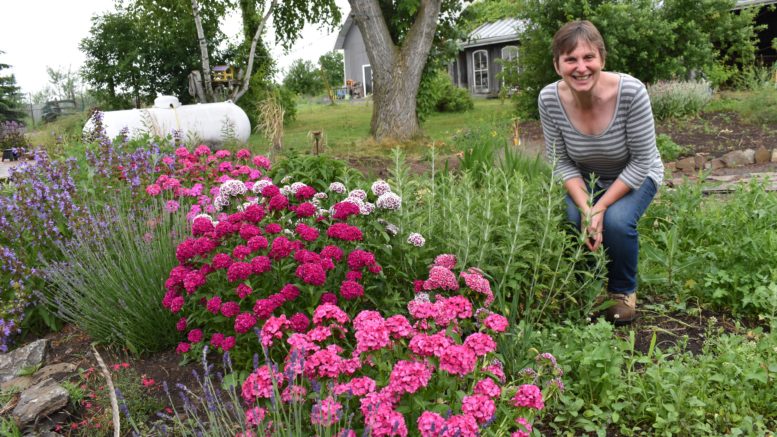 It was a sell out crowd that braved a few rain drops on Sunday and took part in the Prince Edward County Horticultural Society’s annual Self-guided Garden Tour. Featuring a baker’s dozen of stops throughout Prince Edward County, around 100 tourists were able to take in glorious gardens and speak with the green-thumbed gardeners behind the lush greenery.

Horticultural Society President Lise Bois was thrilled with the turnout and said the people showing up at the various stops on Sunday were equal parts appreciative of the skill of gardening as well as looking for inspiration for their own gardens and green spaces.

“I think people are interested in gardening and seeing what can be done with properties even if they are big or small,” Bois told the Gazette. “ I know people are interested in what other gardeners are doing in Prince Edward County to be successful.There are lots of areas that are rocky and have sandy soil so, as gardeners, we’ve had to get creative in a sustainable and ecological way.”

In other words, no matter what your gardening yen, there was an aspect or a variety to enjoy on the 2018 tour.

“Horticulture is trying to expand its scope and it’s not just about flowers anymore,” Bois said. “There was a time when imported flowers was the thing and the native varieties were on par with weeds but I think we are getting back to a better balance between pretty flowers, vegetables and what’s good for the environment.”

At Bois’ garden on County Rd. 8, there’s balance between growth and variety and concern for pollinators. Equal parts ornamental and useful, Bois has placed bowls filled with marbles and water for exhausted bees that need a drink during their pollinating rounds.

“Tired bees will drown if they don’t have a place to land,” Bois said.

Nearby the gardens are birdhouses as well as ones that have been to converted to bee hives.

A place for the birds and the bees to hang out as it were.

At Pat Stuckey’s garden on Lucks Crossroad, the growing has been going on for about 15 years and the well manicured and diverse garden spreads over two acres.

In a trough at the rear of Stuckey’s home lies a unique growing concern in the form of a lotus plant that has two buds emerging from the water.

A pergola at the northeast corner of is an interesting feature and has some growing vines although Stuckey said the growth hasn’t taken off as she would have expected.

“It was supposed to be covered in flowering vines but it turns out that’s the driest part of the property so it’s not as full as we would like,” Stuckey said. “But that’s all part of gardening.”

Given the expanse of sheer beauty, it would be unfair to single out aspects of the various gardens on public display on Sunday but Kim Katannik-Kuris’ pond and fountain near the corner of County roads 8 and 25 was certainly one of the more unique stops in 2018. The 35,000 gallon pond and bubbling fountain that gave a waterfall effect was obvious the second one stepped on the property.

Katannik-Kuris said the waterfall provided “instantaneous relaxation” when she sat near it, sinking her feet into the sand of a homemade beach adjacent to the pond.

“That’s our concession for not buying on the water,” Katannik-Kuris said.

The pond is a busy place above and below, featuring water lilies, cattails, bog bean and papyrus as well as underneath as over 100 fish dart about.

“We started with goldfish and then added blue gills and, after a few years, we had blue gills with gold tails so something tells me they got along famously,” Katannik-Kuris said with a laugh.