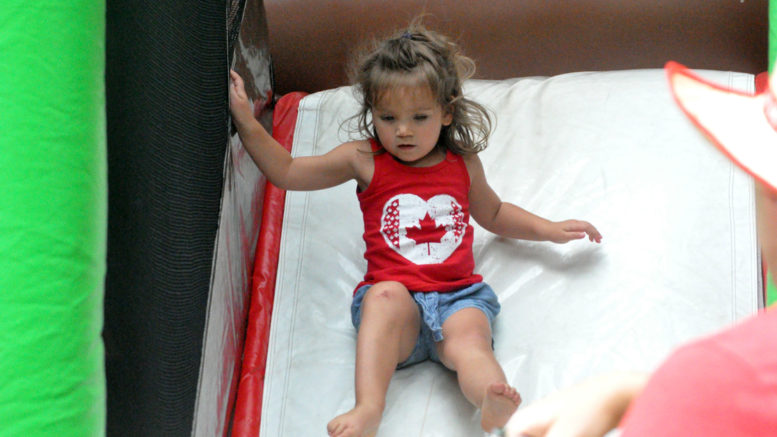 For many years, parents have been able to take their children to Delhi Park or Benson Park to enjoy Canada Day in a carnival of bouncy castles and rides.

This year, there will still be plenty to see and do to celebrate Canada’s 151st birthday, but those particular attractions won’t be available.

Picton BIA manager Sarah Doiron shared the news with the Gazette in hopes of helping patrons avoid disappointment this Sunday. She explained a group of local churches had traditionally run the children’s area, but they resigned after the 2016 celebration.

Last year, the County was able to help secure some Celebrate Canada funding for the sesquicentennial to keep the tradition going, but Doiron said it wasn’t in the cards again.

“We’re down the manpower and the funding. Unfortunately, it wasn’t something that was in the realm of possibility this year,” Doiron said. With a general trend of insurance becoming more time consuming and costly and a shrinking number of companies renting amusement equipment, it may be difficult to see the bouncy castles return in future years, but Doiron said organizers will explore all options available to them.

Meanwhile, there’s still plenty of fun to be had as Doiron said the community has rallied to keep the event going strong.

“A lot of individuals have stepped up and offered to help. I think that’s going to result in some really unique elements again this year.”

On Main Street, Come Alive Outside will once again offer its Green Zone, which transforms a block of asphalt stretching from Elizabeth Street to The Armoury into a grass surface and invites families to play.

In front of Portabella, Studio Barn, a collective art studio in Picton’s industrial park will be hosting a giant Lego project. Doiron reports they’ll have over 10,000 blocks available to build with.

Down the road in front of The Armoury, Rapidfire Paintball will offer another new attraction with Airsoft target practice. Rather than paintballs, participants will be able to shoot foam balls at designated targets.

The crew from John’s Barbershop will get into the spirit this year by offering crazy hair and jumprope. Mister Twister’s Balloons will be making animals in front of Coach’s and there will be face painting near the Green Zone.

Visitors can find information about the day’s events at the Prince Edward County Chamber of Commerce information booth, or browse sidewalk shops for deals. Some food vendors will also make an appearance.

Entertainment will be ongoing throughout the day at two stages on Main Street.

The Town Hill Stage, near Miss Lily’s Cafe, will host the opening ceremonies, O Canada, and comments from Mayor Robert Quaiff at noon. From there, Instant Rivalry’s Caleb Hutton has lined up some talented musical performers. Agroup from the ROC goes on stage at 12:30, followed by Instant Rivalry at 1, The Frere Brothers at 2, Cue the Funk at 3, and Gavin Massey at 4 p.m.

At The Armoury, the Community Interactive Stage will feature demonstrations and activities that will allow people to join in. There will be Tai Chi at noon, pickleball with the Picton recreation committee at 1, the ever-popular Pet Valu Puppy Parade — a fashion show for dogs — at 2, and a drum circle and ukuleles at 3.

The activities shift to the Mary Street parking lot a 6 p.m where there will be music, a barbecue and games before the fireworks at dusk. The Picton recreation committee stepped forward to provide the fireworks show. The Picton Kiwanis Club has also been helpful by providing security for the evening portion of the event.