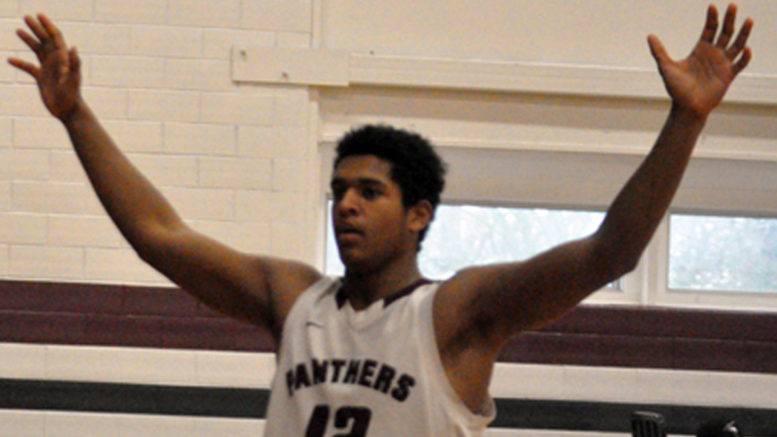 Hard work on the hard court - Alex Arsenault recently won the "Hustle Award" as the hardest working player in the Ontario Basketball League Under-17 all-star game in Toronto, where he competed among the best players his age in the province. (Adam Bramburger/Gazette staff)

In just three years playing organized basketball, Alex Arsenault has emerged as one of the top players in his age bracket across Ontario.

The PECI student who just completed his Grade 11 final exams underscored that last Thursday in Toronto, playing in the Ontario Basketball League Under-17 all-star game. Hitting the court among the top 17 players selected from the pre-eminent league in the province, Arsenault scored 16 points in his team’s 94-93 win and earned the “Hustle Award” as the game’s hardest working player. Arsenault was impressed by the calibre of play he experienced at Hoopdome in front of a full house of cheering fans.

“It was a fast-paced game. Everyone was talented,” he said. “Everyone had a lot of respect for each other. We were complimenting each other on how the game was going. It was a fun time overall.”

For Arsenault, even with the expectations and the scouts in attendance, he committed to a simple formula that has proven successful, both in high school and rep play.

“I just worked hard all game, never gave up, worked hard on defence and took the shot opportunities as they came.”

The power forward, who is one of five county players suiting up for the Belleville Spirits Under-17 team alongside Brodie Byford, Jack MacCool, Devon Wilton, and Gabe Goad, said it was cool to think about where he’s come in the game.

Arsenault moved to the county from the GTA for his Grade 9 year and he recalls falling in love with the game through playing intramurals.

“It was the first sport that PECI hosted. I was asked to play on a team. I thought it was really fun and I should try out for school basketball,” he said. “There was no pressure, no expectations in the beginning. Of course, now there are and that’s O.K. I’ve grown into them.”

Rob Garden, who coaches Arsenault both at PECI and with the Spirits remembers being impressed right from the start but adds that Arsenault has developed much over the years.

“We always knew he was an athlete. Anyone who watches the way he moves, runs and jumps can see that,” he said. “That’s his best asset, but this season, he’s started to mature into a basketball player.”

Arsenault made the commitment to rep ball last year with the County Clippers, but with the program not offering Under-17 or Under-19 teams, he decided for his development he’d cross the Norris Whitney Bridge this year. “

The easiest option was to play (in Belleville),” he said. “Rob Garden was coaching the team. I like him as a coach and I thought it would be a good fit.”

The Spirits played in a AAA loop with eight teams in larger centres across Ontario. They had a 6-6 record in league play and they advanced to Division 2 in the Ontario Cup to play off against teams ranked 9-16 of all basketball teams at their age level. Garden said Arsenault was a standout throughout the year.

“He was definitely, in many instances, our best player, “ the coach recalled. “He turns a lot of heads with what he does best.”

Attention came throughout the season from college and university programs. A virtual unknown in basketball circles was making many take note.

“That’s kudos to him and his work ethic,” Garden said.

For his part, Arsenault said he felt he was improving throughout the year, while the entire Spirit roster refined its skills against top competition. Mentally, Arsenault noticed a change as the year wore on.

“My nerves were calming down as the rep season took off. I wasn’t as timid a player as I started out.”

Garden said that is a big step for Arsenault as he hasn’t always had the same confidence in his own abilities as coaches and others have had. As he matured, he’s been called on to take bigger leadership roles in games and practices. He’s also developed his basketball intelligence.

The league recognized that and invited him to represent the Spirits at the all-star game. Garden and co-coach Tom Callahan endorsed the pick. Garden received text updates from Arsenault’s family throughout the all-star game and he said he couldn’t be happier for him.

“He’s a workhorse by nature, but what was maybe most impressive to me is he went and did it outside his comfort zone,” he said. “He’s working on believing in himself and trusting in his abilities and he put it together against some of the best competition.”

Arsenault soaked in the moment, complete with congratulations from familiar faces from gyms across the league and the inquiries about whether he’d like to play for other clubs or, potentially, post-secondary ball., He seems to know he has a bright future in the game.

“Im glad I’ve worked hard enough to get here and, hopefully, I can continue to get better,” he told the Gazette this week.

“Absolutely, I want to continue playing basketball. As we start to play higher competition, it just becomes more fun.”

Those dreams will come, but right now, Arsenault’s focus is a return to the PECI court next fall and a milestone Panthers victory.

“I want to win COSSA,” he said. When asked about playing a starring role on the senior team, he humbly said he doesn’t know what the future will bring but adds “I hope I can do my part and help us get there.”

That will be another feather in his cap and it be just another step on a road paved in sweat and effort to his next opportunity. To help get there, Arsenault has been working out with the Loyalist Lancers men’s team.

Garden believes the ceiling is very high for the player. “He’s only going into a Grade 12 and he’s committed to a five-year plan at the high school level,” he said. “That’s attractive to coaches at the post-secondary level. They know he’s got lots of development ahead of him and that he’s definitely committed to it.”

Garden believes both universities and colleges will be interested and Arsenault will be able to find the right fit for him.

That’s not a bad reward for someone who not long ago just decided to walk on the court, try his best, and see what he could make of it.