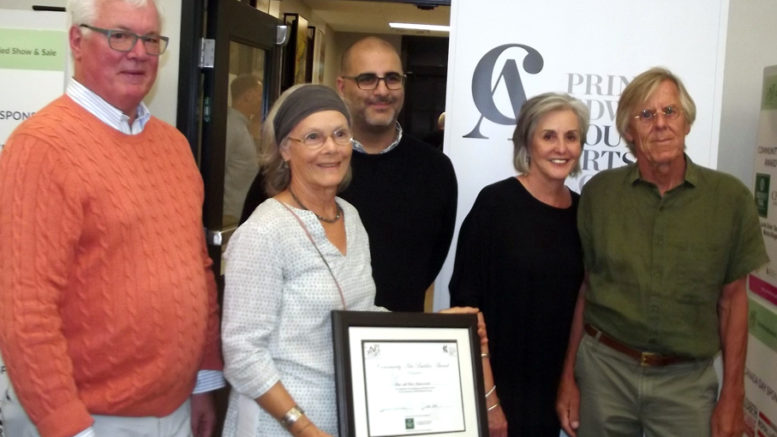 Trailblazing supporters -The first Community Arts Builder Award was presented to Peter and Alice Mennacher of Blizzmax Gallery at the grand opening of the 25th annual Art in the County Juried Show at the Armoury in Picton on Thursday, June 22. Pictured from left are award sponsor Laurie Gruer, Alice Mennacher, sponsors Sam Simone and Monika Klingenberg and Peter Mennacher. (Terry McNamee/For The Gazette)

The amazing depth of artistic talent found across all of the county is on full display right now at the Armoury in downtown Picton during the 25th annual At in the County juried show.

From wildly abstract paintings to whimsical watercolours to shimmering sculptures, the jurors — printmaker and papermaker Wendy Cain, Kingston portrait artist Daniel Hughes and Whitby artist and sculptor Olexander Wlaswnko — have put together an amazing and eclectic collection representing some of the best art in the county.

During the grand opening on Thursday, June 22, many awards were given, including the Community Arts Builder Award presented to Peter and Alice Mennacher of Blizzmax Gallery, one of the first galleries in the county. This new award, made in recognition of the 25th anniversary of Art in the County, included a $250 monetary gift and was sponsored by Laurie Gruer, Sam Simone Eye-catching work – Artist Mia Lane won a Jurors’ Choice Award for her oil painting on board titled “High Tea” (top painting) during the grand opening Thursday at The Armoury. (Terry McNamee/For The Gazette)

& Monica Klingenberg of Chestnut Park Real Estate Limited Brokerage to celebrate people who have enriched community life through the arts. The winner was chosen by a selection committee consisting of Shirley Lewchuk, Laurie Gruer, and Sarah Moran from candidates nominated by local residents.

Show chair Sue Barclay said this year’s show received approximately 180 submissions from more than 100 artists. Of those, 120 pieces from 86 different artists were chosen to be included in the show, which is open only to Prince Edward County residents and ratepayers who belong to the Prince Edward County Arts Council.

“This is the record year so far,” Barclay said. “It’s the biggest show we’ve ever had. It’s a wonderful show, and the response has been incredible. (The jurors) were so impressed by the talent in the County.”

The Otto Rogers Award of Excellence was presented to Annik Després for her oil on canvas entitled “Before Winter.”

Jurors’ Choice awards went to Tom Ashbourne for his cloud alabaster work called “Celestial;” Andrew Innes for his watercolour on paper,” Dahlias At Dawn;” Mia Lane for “High Tea,” oil on board; Milé Murtanovski for his oil on wood panel, “Pearls of Wisdom;” and Wendy Vervoort for her plant material creation called “2DBur.”

The People’s Choice Award, selected by ballots filled out by visitors to the show, will be presented at 2 p.m. on July 8.

Art in the County is open daily from 10 a.m. to 6 p.m. (until 5 p.m. on Sundays) until Sunday, July 8. The show will close at 3 p.m. on the final day. Admission is $3, and free for children under age 12. Admission and birthday cake will be free for everyone on Canada Day. The Armoury is located at 206 Main St. in Picton, beside the public library. The show entrance is at the back of the building off the Mary Street parking lot. For more information, go to the web site www.artinthecounty.com or call the Prince Edward County Arts Council at 613-476-8767.