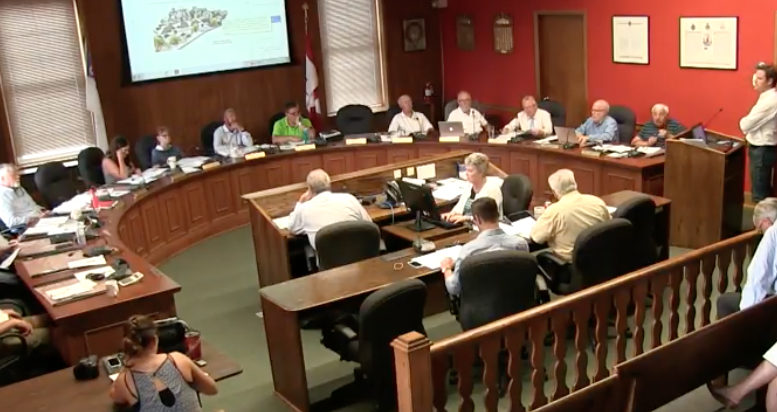 A deputation from the Prince Edward County Affordable Housing Network (PECAHN) appeared before committee of the whole Thursday to share its development plan for the former Wellington arena site.

The initial plan calls for 26 houses to be built on the lands at the corner of Maple and Niles streets — 14 homes fronting those two streets with rear parking and another 12 homes on an internal street.

Four of the homes would be built by Habitat for Humanity.

Initially, the build would be financed through community loans at four per cent interest. There would also be a possibility for government grants and loans to speed up the development process.

Anthony Lemke spoke to councillors on behalf of the PECAHN. He said the not-for-profit group has been working on a vision for the site for about a year, after the County issued a request for proposals for the land. Lemke and his brother own development firm Wharf Lane Inc. and they became involved after hearing that someone from outside of the county might be interested in developing the site.

“I live in Wellington and we know the arena property really well. It’s one of the key pieces of municipal infrastructure that can be redeveloped,” he said. “Wellington has a long history of solving things itself when it comes to public infrastructure… In that spirit, I phoned my brother and asked if we could come up with something.”

Various organizations in the area had kicked the tires on affordable housing, when local Rotarian Barry Davidson started having meetings to bring people together with an interest in addressing affordable housing. That’s how PECAHN came together. It’s been working in concert with the County staff while developing the proposal.

Lemke said the business plan the PECAHN created is just one version of a plan that could be created for the site and said more robust plans could be created in concert with the municipality. His goal on Thursday was to encourage councillors to express their confidence in PECAHN to develop the site.

Lemke further explained the vision, stating that density was necessary to solve the problem, but the PECAHN didn’t think big apartment buildings surrounded by asphalt would fit the community.

“We have a vision for a walkable community with a streetscape consistent with the buildings that exist on Niles Street and on Maple Street,” he said.

The buildings are designed to be flexible, Lemke said, noting some could be divided into two units depending on the demand for affordable housing in the community. There may also be a mix of rental and sale offerings.

He later noted the 26-building plan reflects a density the PECAHN and Wharf Lane reached in concert with the County’s planning department.

“Is 26 buildings units appropriate? I believe it is. My understanding is this is in the secondary plan as a target zone for redevelopment. It’s up to this council and the next one, in planning, to determine what will be the density. This is a density we can stand behind. Staff may come up with more density. We happen to like that it’s still feeling like the heart of Wellington village without putting up a large building.”

Councillor Roy Pennell wanted to know who might qualify for the subsidized housing.

Lemke said that would depend on council and staff’s priorities, but added “there’s a whole spectrum of problems” associated with housing. While low-end housing is a concern, he noted there’s also affordability issues for those people looking to find a home between $250,000 to $400,000 who may be looking to create small business and who could provide the skilled labour force needed locally.

“We’ve talked about Habitat and lower-end rental and that is really important, but so is attracting the next spike who want to start the next business to employ the people we’re talking about,” he said.

“I don’t know whether council’s intention is a 100-per-cent affordable housing complex on that site. Our intention is a demographically diverse development with people from all different income brackets and uses on the site. It was something we could do, literally without anybody’s help,” he said.

Lemke said the plan is a sample and if the County wanted a different percentage, it’d go away and see if it could make the numbers work. If the number was 100 per cent, he said it would likely need grant money.

Right now, he said, there’s a coalition of a small-town developer and a bunch of people who want to see the development happen badly enough they’ve already collected about $1 million in financing.

“With that ready to go, we can press the start button tomorrow and get 9-18 (affordable) units on that property and it wouldn’t be a developer making a profit. That’s our proposal, but we’re absolutely willing to change.”

Councillor Gord Fox indicated he’d like more information from staff before committing to hand over the land, indicating there are costs of demolition, an environmental assessment, and removing asphalt from the parking lot.

“I’m going to wait for a staff report,” he said. “There are a few more things we have to take into consideration.”

Lemke replied that PECAHN wasn’t looking for a decision right away, but simply a commitment to work together. He noted a lot of time and energy had been put in already, for free.

Councillor Brad Nieman asked staff members what a report might entail. Neil Carbone, the County’s director of community and economic development, said it would be the product of further discussions.

“I think the report will come back with a recommendation for whether to not, and how, to move forward with development in some form of partnership with Wharf Lane. We need different discussions to look at the different needs and costing. Hopefully, we can bring back something that would be acceptable,” he said.

“We’re engaged through the RFP process and having those discussions. It would be more of a finalizing report from staff to recommend or provide response to council on what we are able to arrive at.”

Councillors received the deputation and will wait for that reporting.

Bob Clute, the executive director for Habitat for Humanity Hastings and Prince Edward, also appeared before council as part of the deputation. He said the organization was in on initial discussions about the arena property four years ago but was “never able to get any solid traction.” Clute added about a third of Habitat’s builds have been in the county, but the organization has struggled to find land. He encouraged council to support PECAHN.

“I’m here because we have an Achilles heel. It’s not finding volunteers, contractors, labour or materials,” he said. “Our Achilles heel is land. We need land in Prince Edward County. The opportunity to meet with (Davidson) and the affordable housing network group is a very big plus for us.”

According to Clute, the partners hadn’t worked out their financial requirements for one another, but Habitat felt the development is “legitimate” and something that would meet its needs to provide affordable housing. It also wouldn’t suffer the stigma of a low-cost development.

“When I heard of this particular proposal, this fits perfectly the Habitat model. You have young families integrated with seniors. You have seniors who are living for the most part on their own, their children have moved elsewhere… Families integrate, young with old, rental with ownership. It’s a very healthy environment. I like this model, I wouldn’t turn it away.”

Phil Bender, board member with the Prince Edward County Chamber of Commerce, also spoke in favour. He said the local businesses are dealing with a shortage of skilled labour, which can be directly tied to its housing shortage. They need to attract employees, but can’t find places for them to live. Those already working here also feel the pinch.
“Local staff are finding themselves priced out of the county. Often, they’re having to move outside of the county in order to afford a rental unit or buy a place and they need to commute further. The concern the Chamber has is that business in the county that can’t find enough skilled labour might start to move outside of the county. That’s an issue that affects everybody.”
Bender said the Chamber board found the plan well thought out with flexibility to meet changing needs and appreciated its mixed-use nature that would accommodate a wide range of families. He said they believe it is a plan that could be executed quickly and encouraged council to support it.