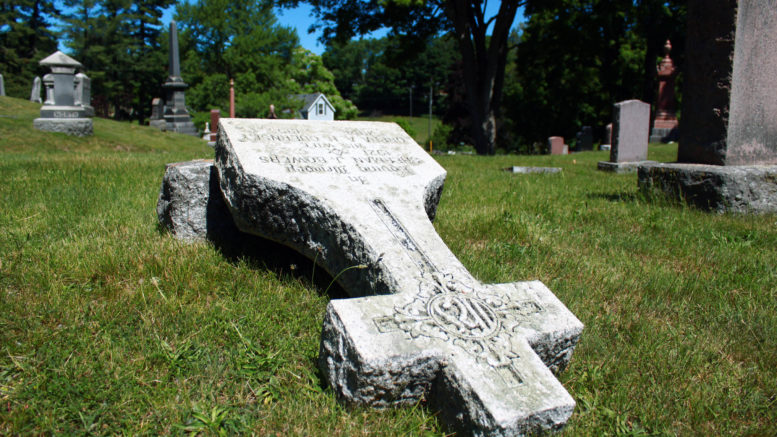 More than a week later officials are still trying to get a grasp on the full extent of damage after a rash of vandalism at Picton’s Glenwood Cemetery.

Glenwood board chair Sandra Latchford said over the last week and a half staff has continued to try to catalogue all of the damage. The municipality offered the help of some of their summer students to try to help complete that inventory. The names on the damaged markers are being recorded and pictures of the damage are being saved. Latchford said she’s hopeful that work will wrap up by the beginning of next week.

“Then we will be able to post that on our website and be able to search that so that families can easily go to that and find out whether their monument was damaged or involved in the vandalism,” she said. “Using that inventory, we’re going to be able to get a better handle on how much it’s going to cost to restore or deal with all of this.”

The list will also be made available to monument companies so they have an idea as well. Once the cemetery understands the full extent and cost of the damage, they can begin to organize repairs and restoration. She reiterated that there is going to be an immense cost in fixing what was damaged.

“It’s going to be a huge dollar figure on the repair, it really is,” she said. “Some of the historic monuments that have been here for over 100 years have been badly damaged and we’re going to have to bring in professionals to deal with that.”

Some of the impacted monuments are made of marble or rare stone that can’t be easily sourced. Others were transported from Europe near the turn of the last century and are going to take great effort to restore.

“They’re really going to take experts to handle,” she said. “Others are not damaged so badly, we can pin them and put them back up, but, again, it’s going to take lots of heavy equipment and people.”

Thankfully, Latchford said, there hasn’t been any further vandalism since news of the destruction began to spread. She expressed gratitude to all who have offered kind words, financial assistance or any other support through a difficult time.

“It’s been fabulous, we’ve had so many calls, we’ve got volunteers helping us take the calls and making sure everybody gets the information they’re looking for on their monument or how they can help,” Latchford said. “We’re trying to get that organized now.”

It’s reassuring to know the community is willing to step up and support the site in a time of need, she said.

“It’s unbelievably helpful because the damage is really bad and it’s heartbreaking to see,” she said. “It’s really great to know that people feel for us and support us in helping get it restored.”

The cemetery has a couple of fundraisers coming up. Glenwood had previously scheduled a concert at the chapel. Harp & Voice featuring Janine Dudding on Celtic harp with Josie Farrar will be taking place at Glenwood Chapel on Saturday, July 21 at 2 p.m. Admission is by donation. Plans are also ongoing for a benefit concert later this month at the Regent Theatre.

“We have a couple of things in the works and we really appreciate the support of the community,” she said.

Latchford said it’s been a heartbreaking time for all involved with the cemetery and for the community.

Donations to the restoration effort can be made by e-transfer to the address glenwood2018@bellnet.ca or by cheques made payable to Glenwood Cemetery. Funds are being raised through www.canadahelps.ca/en/dn/28844 as well and Flowers By Marvin is collecting via a donation jar.