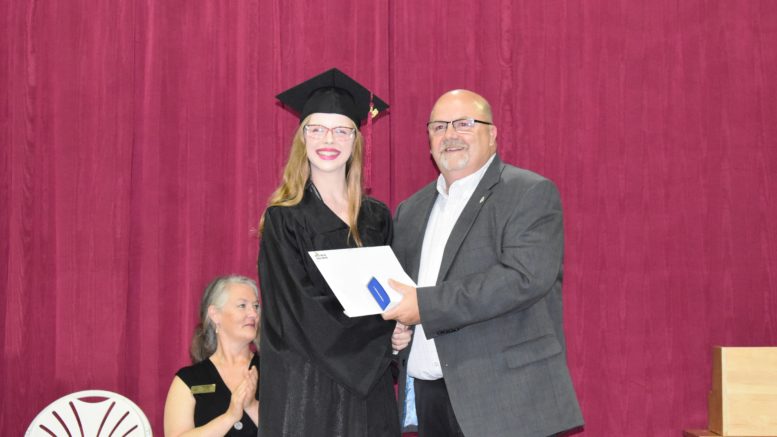 There was no hiding that PECI pride on Thursday evening as the local secondary school celebrated its annual graduation ceremony at the Prince Edward Community Centre.

Pride was certainly one of the themes of the hour as PECI said goodbye to 110 students in a lengthy ceremony that lasted nearly three hours simply due to the sheer volume of awards and bursaries handed out.

Despite a declining number of students, the love and support doled out to PECI graduates by staff, school board trustees and community members grows exponentially each year and that was certainly the case on Thursday.

In her remarks to graduates and their supporters which filled the stands of Huff Estates Arena, Prince Edward North Trustee Jennifer Cobb said the Hastings and Prince Edward District School Board was a system that promotes excellence and success for every student.

“I look out into the crowd tonight and I recognize so many students. Never forget you are our pride. You are our children and you are the future of Prince Edward County,” Cobb said.

The trustee encouraged the graduates to take the next big step in their lives while remembering the character attributes instilled in them during their secondary school careers by both the staff, administration and educators that propelled them and the parents and family supporting them every step of the way.

Due to his own daughter’s graduation ceremony, PECI principal Darren McFarlane was unable to attend Thursday evening’s commencement celebration, meaning PECI Vice-Principal Therese McMahon was bestowed the honour of congratulating the class of 2018 at the premier event of the school year.

McMahon thanked the many community donors that supplied the seemingly countless awards, scholarships and bursaries handed out Thursday. 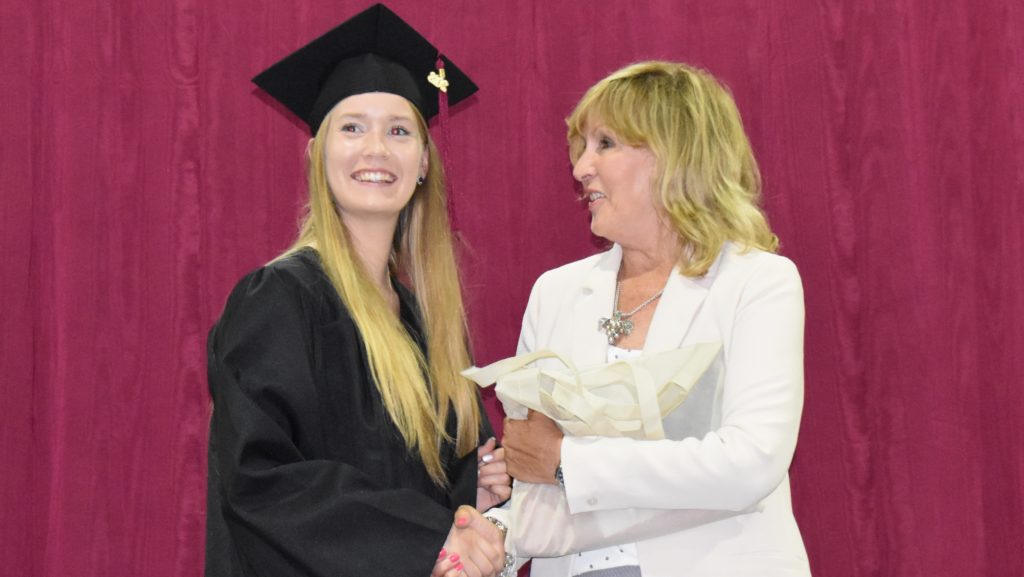 Whether it be a business, a family memorial or a service club-sponsored award, Prince Edward County is clearly a community that takes great pride in rewarding the hard work of its secondary students with over 40 Grade 12 subject awards and 81 graduate bursaries and prizes.

“The level of support that our students receive is unprecedented throughout the district. For that, we thank you,” McMahon said.

McMahon was quick to thank the parents in attendance Thursday and the role they played in graduate success.

“Parent engagement leads to student engagement and, ultimately, student success. No doubt the smiles around the room tonight are indicators of your involvement,” she added.

As is tradition, the Vice-Principal recognized those staff members closing the PECI chapter on their professional lives and wished Christine Leggat, Peter Molloy and Chris Winfeld the best in their retirement.

McMahon closed out her remarks by reminding the students of a prominent and inspirational sign inside the school walls that reminds them everyday they are the pride of Prince Edward County.

She said the message should not be taken lightly and be carried with them to the next stop on their adventure.

“I urge you to reach beyond which is easily attained while in the process never forget where you came from and the esteem in which your supporters hold you,” said McMahon.

In terms of awards, Skylar Pierson was Governor General’s Academic Medal award winner for having the highest academic standing. 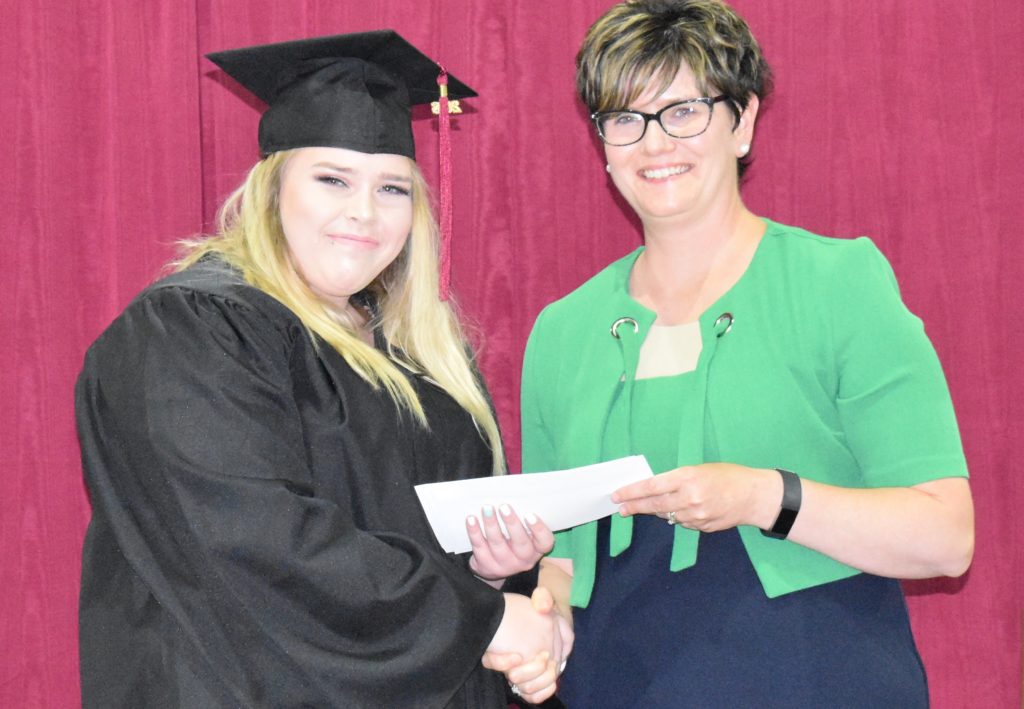 Mee was also recognized with the George Elson Memorial Award as the student’s council’s choice of best all-around student at PECI.

In one of the most poignant valedictorian addresses of the last decade, self-described movie buff John Conroy posed a simple question to his fellow graduates Thursday.

Comparing the first 18 years of their lives to the first 10 or 15 minutes of a movie, Conroy explained the major plot points have been introduced and the plot of each student’s story should be moving forward.

“We have all arrived at an age and inclination to move on and to discover what the world holds for us. But who is writing the script? We’re 15 minutes into the movie of our life. Is the plot fixed yet? Is it clear where our story is going? Are we the screenwriters—or merely —characters walking around in someone else’s screenplay?” Conroy wondered. “If we aren’t asking ourselves these questions now, when will we?”

It was just four years ago Conroy and his classmates entered the halls of PECI as bright-eyed young teens eager to soak up the high school experience, to make new friends and “find out how we fit in the world away from mom and dad.”

But while finding their place in the next world over, the students encountered what Conroy described as a large institutional machine—carefully designed and calibrated to move students efficiently and cost effectively through Grades 9 to 12. 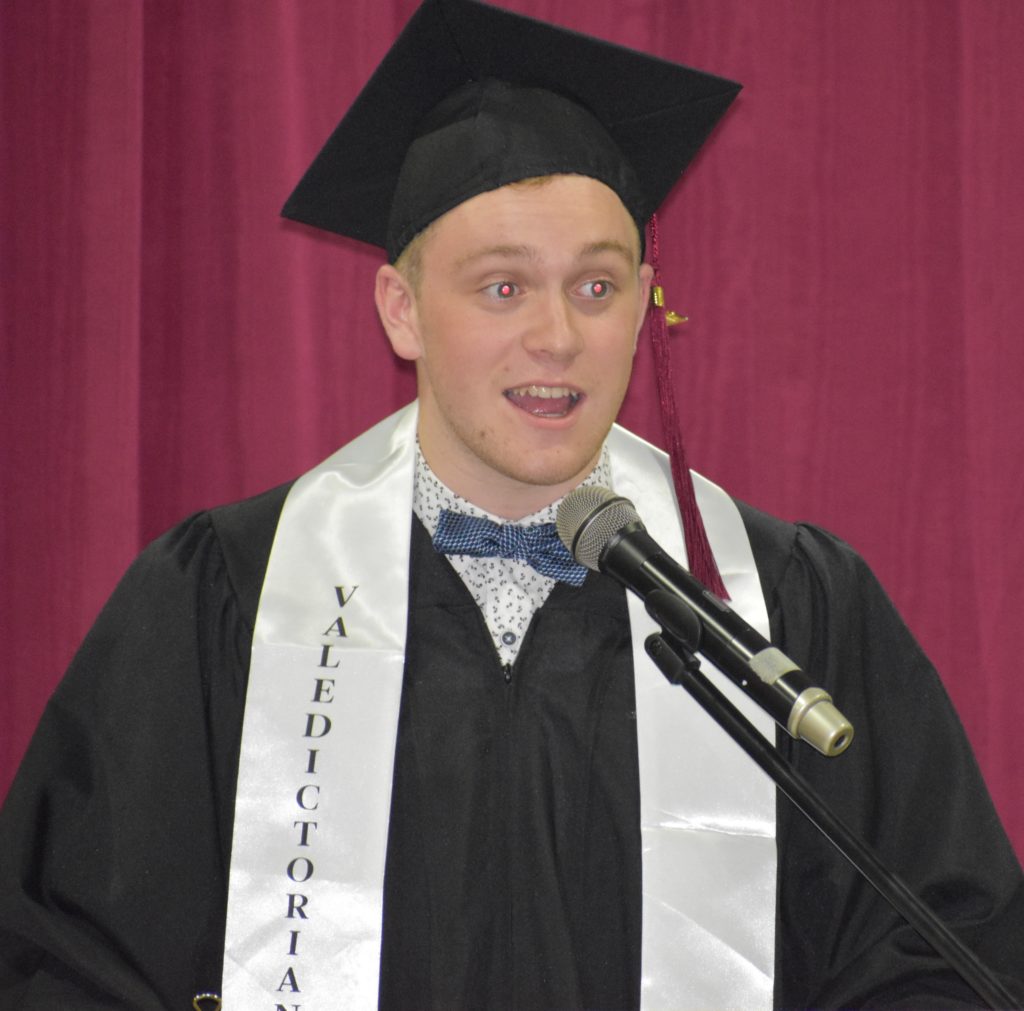 “I don’t mean this to be as critical as it sounds, for I believe all of the staff who work with us daily, is doing their best within this large and complex system. And indeed many of us have thrived within these walls. And deservedly so,” Conroy said. “I merely wish to acknowledge that the essential job of any high school is to convey a common curriculum to a large number of students in an efficient manner. It is necessary, therefore, that all the odd-shaped pegs be persuaded to fit into a round hole.”

But that process by definition subdues individuality, oddness and unique stories and one of the lessons students will take away from high school is that sometimes the easiest and most painless way to emerge the other side, is to fall in line.

“This I fear, is a trap—easy is the enemy,” the valedictorian said. “But it doesn’t have to be our story. Most of the movie has yet to play out. We have so much more yet to write.”

But there’s good news according to the graduate.

In Conroy’s view, all that was needed by the grads was a decision on who will be the author of their individual stories.

“We don’t have to know who we are going to be or how our story will turn out. But we need to decide that it is our story and that we will write it,” he said.

Conroy called his classmates to appreciate the people around them— friends and family will always be a source of strength and love.

“And remember if life closes a door, grab that handle and open it again, that’s kind of how doors work. If there’s anything you take from today, remember that to ‘leave a good story’ is not about money and recognition, rather it’s to leave those with whom you cross paths a little more joy and hope,” he said.

PECI graduates emerge from a school that has given them a caring and nurturing community and the story here together as a senior class will not be remembered by grades, popularity, likes, or retweets, but by relationships.

“The kind of person you were. You might have been. And may yet be.These are our stories. Eat the delicious food. Walk in the sunshine. Jump in the ocean. Say the truth that you’re holding inside you. Be silly. Be kind. Be weird,” implored Conroy. Because your story needs you. And the world needs us.”