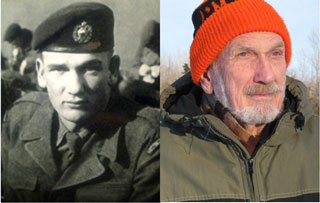 Solomon John Vernon Robbins
It is with great sadness that the family of Solomon John Vernon Robbins announces his passing on June 30/18 after a brave battle with Alzheimer’s. Born in Bancroft March 15/1934, predeceased by his parents Solomon and Lydia Robbins, brother Carmen, sisters Hazel Stone and Yvonne Griffen; survived by sister Sharon Payette. Survived by his partner Eileen Skillen, first wife Violet, and predeceased by his loving wife Ruby Robbins (Howard).Loving and fearless father to Janet Robbins (Leon), Terry Robbins (Lydia), Verna Dubray (Tony), Irene Robbins Goodmurphy (Paul), Cherie Chartrand (Murray), Tina Robbins, and stepdaughter Julia Skillen (Andre); leaving behind 21 grandchildren, 17 great grandchildren,and many nieces and nephews. Sol joined the Canadian Army March 17/52 at the age of 18. He served his country in Korea, was part of the Canadian Guards, Petawawa Garrison at CFB Petawawa, overseas in Cyprus, Soest, Germany, and lastly, Camp Picton where he was honourably released Feb 12/1969. Corporal Robbins received the United Nations Service Medal, Korea Medal, United Nations Cyrus, and the Canadian Forces Decoration.Being the adventurer he began a real estate career for Keith Reality and hung his shingle in Deseronto for two years. He and his family then settled in Picton where he would call home for a few years with his own real estate business, owning Shelter Valley Trailer Park until he began working for the GOVT as a Property Manager. Sol worked at Queen’s Park, married Ruby and built his log home in the Park with pride. Sol received his Golden Handshake from Queen’s Park, after managing housing for the Ministry at Prince Edward Heights. He travelled, continued to look after the Park with his partner Eileen, changed homes several times, and built an off-the-grid cabin at Point Petre which gave him lots of solitude and joy. Despite living the last 8 years with Alzheimer’s, he sought out comfort and happiness cuddling and walking his dogs in nature (Jake, cat Charlie), and of course his greatest accomplishment, his pride and joy, being a father to his children.Cremation has taken place as Sol wished. A Celebration of Life will take place on Saturday July 7/18 @ Picton Elks Lodge / PEC Legion, 21 Elk St. Picton ON. 1pm -3pm. In lieu of flowers, a donation to the Alzheimer’s Society would be appreciated.