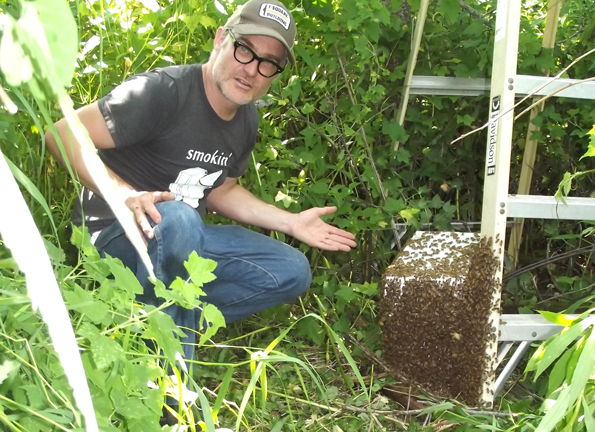 Here’s the buzz - Gavin North displays a swarm of honeybees he captured at Honey Pie Hives and Herbals. He asks people not to kill swarms, but to call him to relocate them. (Terry McNamee/For The Gazette)

Talk about a honey of a day!

On Saturday, June 30, visitors swarmed to Honey Pie Hives and Herbals in Point Petre for its second annual Honey and Herb Day, and some of them were even human. But not all.

“A swarm happens when the bees outgrow the space in their hive,” North explained. “If we’re lucky, we can catch the swarm. I can take that swarm and keep it in boxes and take it to another property.”

He said swarms happen in late spring and early summer. Bees start producing honey in early summer when flower production is in full swing and there is plenty of nectar to bring back to the hive.

North and his wife, Bay Woodyard, began their honey operation in 2000, and moved to their current location 705 County Rd. 24 a couple of years later. Their lives have been a hive of activity ever since.

“We have 102 (hives) right now,” North said. “I’m the beekeeper and mead-maker, and Bay is the gardener and herbalist.”

The flavour and colour of honey varies according to the bees’ nectar source.

“Because our bees are close to many different flowers, we call it Wildflower Honey,” he said.

He said the business includes the sale of herbs, most of which they grow themselves, and herbal products such as seasoning blends, body care products and teas, as well as a variety of gift items, beeswax, candles, honey and mead, which is a fermented alcoholic drink made from honey, yeast and water. Mead can, but doesn’t always, include include spices, fruits, grains or hops. It is an ancient beverage, dating back thousands of years, and in many cultures it was considered the nectar of the gods and a cure-all for a variety of ailments, depending on the kind of nectar harvested by the bees and/or the herbs added to the mead.

“The herbal meads are called metheglins, which is an old word for medicine, but we can’t market it as medicine,” North said.

Like beer or wine, mead can be enjoyed on its own or before, during or after a meal.

As well as the honey and herb business, Honey Pie offers a series of six all-day classes for people wanting to learn how to raise bees.

People have come from as far away as Toronto to learn about it.

“I teach beekeeping workshops here,” North said. “It’s pretty popular. It’s one Sunday a month. Usually I have 10 or 12 people a year.”

The cost is $100 for one workshop or $550 for all six. North said their Honey Pie honey, mead and other products are available for sale at the farm from spring until the end of the year, online at www.honeypie.ca, at the Wellington Market every Saturday and at the Busy Hands event in December.

North stressed people shouldn’t panic if they see a swarm, and especially should not spray them. “If people see a swarm of bees, call me and I’ll come and take them away free of charge.”