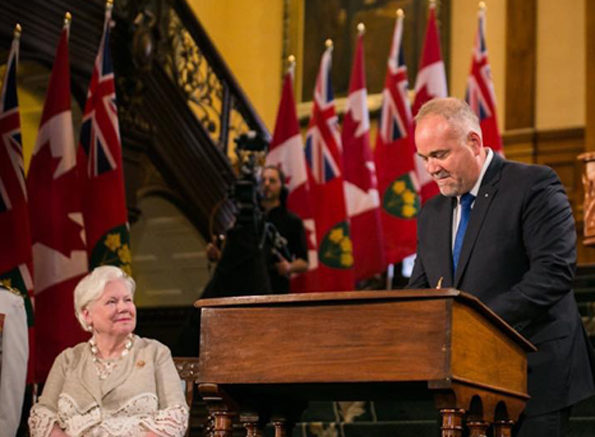 sworn in Bay of Quinte MPP Todd Smith signs an affirmation after being named Minister of Government and Consumer Services as Lt.-Gov Elizabeth Dowdeswell looks on Friday. (Legislative Assembly of Ontario)

Bay of Quinte MPP to serve as Minister of Government and Consumer Services, government house leader

Bay of Quinte MPP Todd Smith called Friday’s events a “surreal experience” as he sat at Queen’s Park with his colleagues chosen for Premier Doug Ford’s cabinet and heard his name called to be sworn in.

“It was the history and just the realization that I was chosen to sit at the cabinet table, which is what I’ve been working for the past seven years,” he said. “Probably, the best part was as soon as the ceremony was over, we went right into the cabinet meeting and went to work.”

The third-term representative will be serve as Minister of Government and Consumer Services in the Progressive Conservative majority in the legislature and he’ll also have the important role of government house leader, which is the person responsible for ensuring the government’s agenda gets passed. That’s two big roles for a man who admits he wasn’t certain if he’d even be part of Ford’s executive council.

“The three weeks since the election was kind of an agonizing wait to find out if you were going to get the call or not,” he said. “I was very, very pleased to get the call on Wednesday night from his chief of staff advising me that I would be part of the ceremony on Friday and have the two roles I have.”

As the whirlwind of emotion of signing his oath in the presence of Ford and Lt.-Gov. Elizabeth Dowdeswell with his wife Tawnya, daughters Payton and Reagan, families and supporters watching, Smith was swept up in another whirlwind over the holiday weekend, realizing the magnitude of his new responsibilities.

“Both of them are pretty big, important roles,” Smith told the Gazette. “One with the functioning of the legislature and ensuring the government’s agenda gets passed. The other, Government and Consumer Services, is a big file with lots of responsibilities going with it. It’s been like drinking from a fire hose the last day or so with ministry briefings, learning who my new employees are and what I’m responsible for.”

Smith said the new government is committed to making customer service a focus with a priority on making taxpayers’ points of contact with government more accessible and more modern. One aspect of his new role will be continued digitization of Service Ontario products, relying on online access as much as possible.

“It’s birth certificates, hunting and fishing licences, health cards, land registry services, and one-stop shopping for businesses, that kind of thing,” Smith said. “We’re trying to make sure as much as possible is easily accessible online and making customer service as convenient as possible.”

Though in his own riding there are Service Ontario offices already in Picton, Trenton, and Belleville, Smith said he hopes that more people will be able to interact with their government from their own homes.

Smith’s ministry is also tasked with overseeing a major renovation to the Queen’s Park legislature and grounds and shuffling office space around while that work is underway. Much of the government’s procurement will also go through the ministry, which also includes government payroll and human resources.

While he said it may not oversee the expenses the Ministry of Health and Long-term Care sees, much oversight is required within his new role.

“It touches and affects every other ministry,” he said.

“I’ve always been interested in the way the house works and the way government legislation gets passed. Basically, my office is going to be the air traffic controller as far as government traffic goes, making sure planes take off and land on time,” he said.

That duty started almost immediately with the legislature back in session next week. The government will have to be ready for a vote to elect the Speaker Wednesday, present its throne speech Thursday, and get right into legislative business on Monday. Smith said it’s nice to be getting down to work immediately and to have his party in the driver’s seat to effect change.

As government house leader, he’s also in a position to work with the opposition NDP and the Liberal and Green parties. He said some Liberals have approached him about ensuring they still have a voice in the legislature and he’ll be working on developing the Progressive Conservatives strategy on that issue.

Meanwhile, Smith said he hasn’t forgotten his responsibility to electors in Bay of Quinte. He said he spent much time on the weekend discussing the White Pines Wind Project and other local issues with his new colleagues. He said the turbine project remains a priority.

“That’s at the top of my list of items, clearly, because of the timing of the whole issue, but there are a number of other local issues I’ve already addressed,” he said. “I haven’t wasted any time getting down to work. I’m looking forward to what is going to happen to get some of those issues tended to.” Smith also said he is grateful to have been re-elected and hopeful his new role helps locally.

“I’m honoured to get the trust of the people of the Bay of Quinte and Prince Edward County, in particular. Now in this elevated role, I look forward to being able to deliver even more for the people of my riding.”