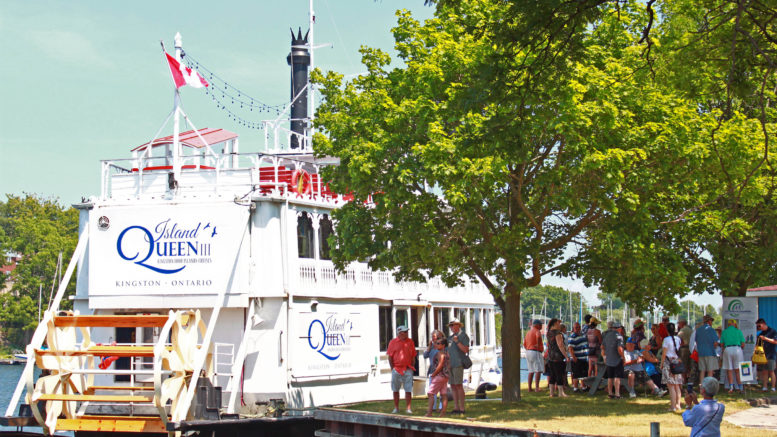 The Island Queen awaits as passengers line up to register for the afternoon cruise on July 5. (Chad Ibbotson/Gazette staff)

It was another successful year for The Children’s Foundation’s Cruise for Kids.

The fundraiser for the charitable arm of Highland Shores Children’s Aid welcomed a total of 230 people aboard the Island Queen for afternoon and dinner cruises on July 5.

The event included a guided tour of the shores of Prince Edward County aboard the Mississippi riverboat-style Island Queen. The casual afternoon cruise featured appetizers, a silent auction, and raffles, while the three-hour evening cruise featured a riverboat fantasy theme with a three-course dinner, silent auctions, and more.

“It’s amazing,” she said. “Every year it just seems to get a little more publicity and every year we have different organizations within Prince Edward County coming on board and hearing about the popularity of the event and wanting to be a part of it.”

It’s an event members of the community are increasingly looking for on the calendar each year, Anderson said.

“It’s definitely gaining popularity,” she said. “I sold my first few tickets for it in April of this year whereas last year it was probably closer to the end of May or beginning of June.”

Anderson said there were several instances where positive experiences on the afternoon cruise last year encouraged people to purchase tickets for the dinner cruise this year.

“Now that it’s going to be an annual event and it happens around the same time every year, people have definitely started marking their calendars,” she said.

While a final tally of the funds raised during the event wasn’t yet available, the money will support The Children’s Foundation’s Playing for Keeps, Camps of Hope, and Helping Hands programs. Camps of Hope provides funds to help children attend camps during the year, whether it be March break camps, summer camps, or winter break camps. Playing for Keeps helps offset the cost of participating in extracurricular activities like sports, dance, or music lessons.

“There are definitely families with multiple children who are unable to have all of the children attend something with the amount of different activities these days and the prices just seem to be going up for them,” said Anderson. “We have families too who have a child who has some type of special need or requires a little more attention than the others and we’d like to make sure the other siblings are able to participate as well.”

Playing for Keeps and Camps of Hope are for children in the community as well as those associated with Children’s Aid. 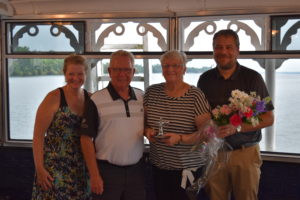 The Helping Hands program is new to the county. It provides support to expecting mothers and helps ensure they get everything they need for a healthy pregnancy.

“We have people who help with prenatal appointments, shopping, and getting them the proper prenatal medication and just making sure they’re as knowledgable as possible before baby comes and they know things are going to turn out well once the baby gets here,” said Anderson.

There was one special addition to the dinner cruise this year in the form of recognition to a hardworking local volunteer. The foundation recognized Cruise for Kids committee chair Susan Rose for her work in the community which includes this event as well as the annual Angel Tree campaign.

“She was a foster mom for 20 years and it was basically just to recognize how wonderful of a volunteer she’s been and how much she’s done for children within Prince Edward County,” said Anderson.

A number of local sponsors including Hickory Homes, Picton Dental, Home Hardware, Bay of Quinte Mutual, Elizabeth Crombie, and Pretsell Davies Thompson Benton LLP, continue to support the event and keep it going each year. Anderson thanked them all on behalf of the foundation.