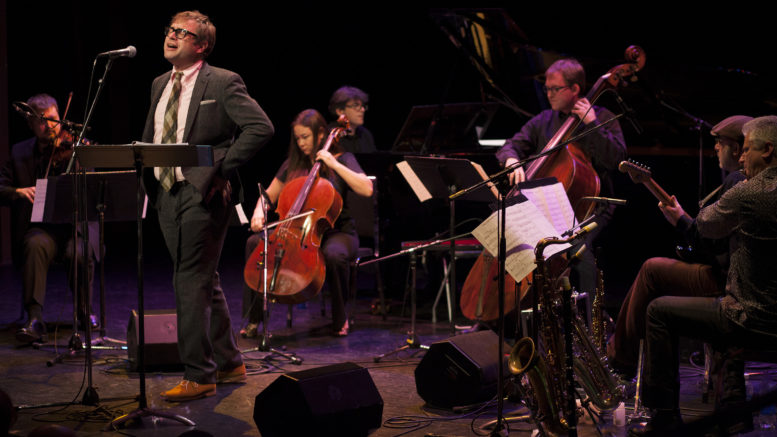 Prepare to be surprised.

That was the message from Steven Page to the audience of Songbook: Steven Page with the Art of Time Ensemble, a concert presented by Festival Players in association with The Regent Theatre which will take place this Thursday, July 12 at 7:30 p.m.

Page, a co-founder and former frontman for Barenaked Ladies, will join Toronto’s Art of Time Ensemble for an eclectic evening of music featuring the works of Leonard Cohen, Randy Newman, Radiohead, Elvis Costello, Barenaked Ladies, and Page himself. Those songs will be presented through the inventive prism of Art of Time Ensemble, winding along through genres including classical, pop, and jazz and performed by Page, a distinctive voice of contemporary rock.

Page told the Gazette audiences can expect a night that is both distinctive and entertaining.

“It’s a really different experience,” he said. “Our repertoire ranges from a few of my own songs to Leonard Cohen, to The Beatles, to Radiohead — it’s all over the map and quite a wide range of music.”

He said the performance bridges the gap between classical and pop concert. From the perspective of an artist, Page said it’s a great gift to be able to share the stage with a group of talented professionals from an array of genres.

“The first time I worked with Art of Time it was intimidating walking into a room with these legit musicians and here I am the pop guy,” he said. “That dissipates very quickly, you realize that you’re all there for the same purpose which is to create the most unique and most authentic to yourselves performance of that material.”

Rather than acting as individual musicians, he said, there is a sense that everyone is pulling together in the same direction and working as a band.

There’s good reason they’re a cohesive unit. Page has performed with Art of Time Ensemble on and off over the last decade. They collaborated on an album titled A Singer Must Die in 2010 following Page’s departure from Barenaked Ladies. They partnered again in 2011 and, earlier this year, wrapped up an extensive U.S. tour.

Art of Time Ensemble was formed by renowned concert pianist Burashko in 1997 when he invited a group of like-minded musicians as well as prominent dancers, actors, and other artists to perform one-off concerts in Toronto. Since then, the ensemble has grown into a cultural powerhouse in the Toronto performing arts scene. The group performs regularly at the Harbourfront Centre Theatre, Koerner Hall, and with leading Canadian orchestras in addition to touring and releasing albums.

About 10 years ago, Page said, Burashko contacted him through mutual friends. He wanted to know whether Page would be interested in taking part in his Songbook show. The vocalist would choose a selection of songs they’ve always wanted to perform which would then be arranged and performed by Art of Time Ensemble.

“It sounded fascinating and exciting to me and right up my alley,” recalls Page. “Andrew and I, and the group and I, really hit it off right away and it was a successful show and a relationship we wanted to continue.”

It being the ensemble’s 20th anniversary, Page said it’s exciting to be able to share the milestone with the group.

“It’s been 10 years since I started working with them, so having been part of it for half this time is exciting as well,” he said. “They’ve just grown both in size and scope so much over the time that I’ve known them — it’s very exciting to celebrate with them.”

As of Monday afternoon there were still a handful of tickets available for the show. The cost is $48 plus HST. Tickets can be purchased at https://festivalplayers.secure.force.com/ticket.

The show is Festival Players’ season opener. The season will also include A Funny Proposition by Bruce Dow July 26–28, The Drawer Boy by Michael Healey, directed by Graham Abbey from Aug. 1–18, Blind Date with Christy Bruce, a Spontaneous Theatre Creation by Rebecca Northan Aug. 22–Sept. 2, and A Beautiful View by Daniel MacIvor, directed by Andrea Donaldson Sept. 4–23.